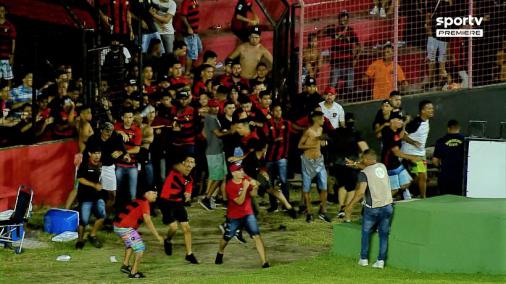 The Attorney of the Superior Court of Sports Justice (STJD) denounced Sport for the confusion in the game against Vasco, last Sunday, on Ilha do Retiro. The club was framed in three articles of the Brazilian Sports Justice Code (211, 213 and 205 §1) and in two of the General Regulations of Competitions of the CBF (19 and 20). The latter can declare Leão as the loser of the match, which would give Cruz-Maltino two more points in the Serie B classification.

+ Vasco keeps distance to Sport: see the chances of access in Serie B at the end of the 35th round

In addition to the complaints, the Attorney General’s Office filed an injunction asking for the interdiction of Ilha do Retiro. Other claims are that Sport plays behind closed doors in home matches and is not entitled to tickets in away matches.

The complaints are already in the electronic system of the STJD and should be judged next week. President Otávio Noronha has the preliminary injunctions in hand and should be analyzed in the coming days.

The articles that Sport was denounced:

Article 19 – A match can only be postponed, interrupted or suspended if at least one of the following reasons occurs:
I – lack of security;
V – conflicts or serious disturbances on the field or in the stadium;

Article 20 – When the match is suspended for any of the reasons provided for in art. 19 of this RGC, this will be done after judgment of the corresponding case by the STJD:
I – if the Club that caused the suspension of the match was winning or the match was tied, such Club will be declared a loser by the score of 3 to 0 (three to zero);

Article 205 – Prevent the continuation of the match, event or equivalent that is being disputed, due to the intentional insufficiency of its athletes or in any other way.
FEATHER: fine, from R$ 100 to R$ 100 thousand, and loss of points in dispute in favor of the opponent, in accordance with the regulations.
Paragraph 1 The sporting entity is subject to the penalties of this article if the suspension of the match has been proven to be caused or provoked by its fans.

Article 211 – Failing to maintain the location that you have indicated for the event with the necessary infrastructure to ensure full guarantee and safety for its realization.
FEATHER: fine, from R$ 100 to R$ 100 thousand, and interdiction of the place, when applicable, until the requirements contained in the decision are satisfied.