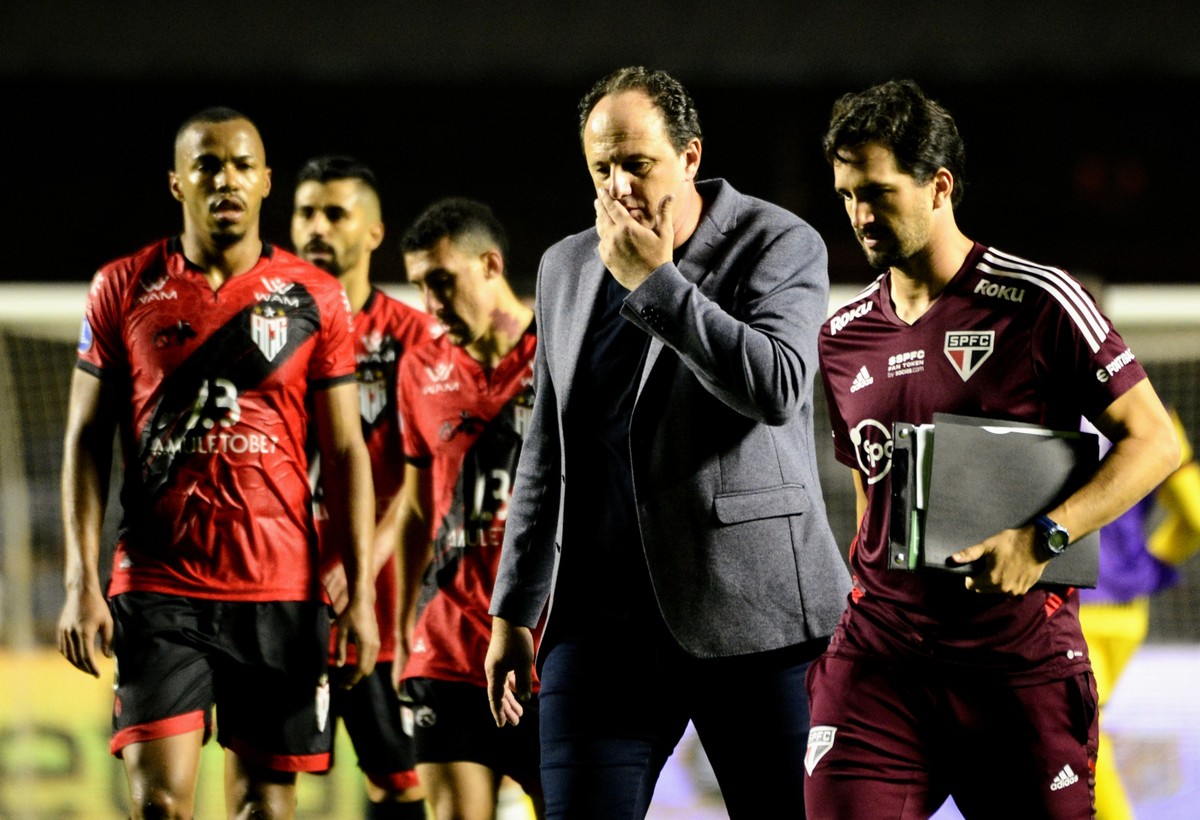 By G-8, São Paulo makes a series of games against teams that fight not to fall; simulate results | Sao Paulo

São Paulo will have a sequence of three games against teams fighting relegation to get closer to the G-8 before facing Atlético-MG, in what could be a direct confrontation in their search for a spot in the Libertadores of the year that comes – the team from Belo Horizonte is in seventh place, with 47 points, six more than Tricolor.

This Thursday, the team led by Rogério Ceni faces Coritiba, in Morumbi, at 20:00 (Brasília time), in a match for the 29th round that was postponed because of the South American final – from then on, São Paulo will have the same number of games as most Brazilian teams.

Read too:
+ São Paulo is convinced: Gabriel Neves will stay
+ Ceni must have unprecedented defense against Coritiba

Rogério Ceni in São Paulo vs Atlético-GO, for the Sudamericana — Photo: Marcos Ribolli

Coach Rogério Ceni has problems to start the team for this duel, especially in defense. The coach should only have Léo and Luizão as defenders, since Ferraresi and Beraldo are suspended, and Miranda and Arboleda are injured.

Coritiba is in 15th place, with 34 points, just three more than Cuiabá, in 17th.

Then, on Sunday, São Paulo travels to Caxias do Sul to face Juventude, who is the lantern of the Brazilian, for the 33rd round.

With only 21 points in 32 games, the team from Rio Grande do Sul should not escape the stick. Today, with six games from the end of the tournament, it is 13 points behind Ceará, the 16th and first club outside the relegation zone.

+ Simulate the next results of São Paulo

Juventude have not won for 13 rounds, when they beat Ceará in the last match of the first round. In the final half of the Brazilian, there were eight defeats and five draws.

On the following Thursday, the 27th, São Paulo returns to play in Morumbi. The rival will be Atlético-GO, opponent in the semifinal of the Copa Sudamericana – with a defeat in Goiânia, a victory at home and a spot only won on penalties.

Goiás still have a chance to escape next year’s Série B. In 18th position, with 30 points, they are four behind Ceará.

A good performance in these three matches tends to bring São Paulo closer – or, who knows, even inside – the G-8.

An obstacle for São Paulo in this fight may be the number of victories, the first tiebreaker. Ceni’s team has only nine triumphs, while Santos already has 11, Botafogo and Fortaleza, 12, and América has 13.

After this sequence against teams from the lower part of the table, São Paulo will face rivals that are above it.