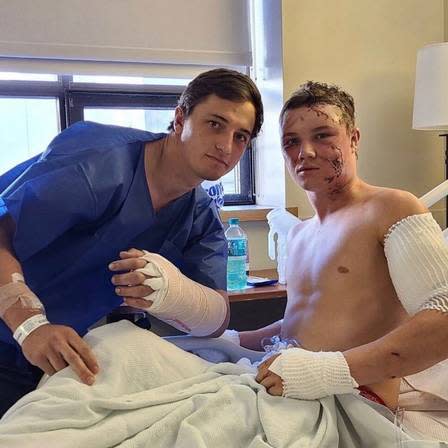 College wrestler jumps on bear in US to save best friend: ‘I pulled it by the ear’

A college wrestler saved his best friend from a grizzly bear attack in the United States after jumping on top of the animal and pulling it by the ear. The clash took place this Saturday in the Shoshone National Forest in the western state of Wyoming. Brady Lowry and Kendall Cummings were hunting antlers at the scene at the time of the accident.

The pair survived the confrontation, but suffered serious injuries to their bodies. Lowry, who was attacked by the mammal, had his arm broken. The two practice a style of wrestling in college known as “collegiate wrestling”. In an interview with the American newspaper Cowboy State Daily, they told details of what happened.

“I could hear it when its teeth were hitting my skull, I could feel it when it bit into my bones and they kind of break,” Cummings described.

It all started when the friends drifted apart for a moment and, on a mountain descent, the bear charged Lowry. In addition to Cummings, the young man was accompanied by two other teammates. They went out hunting after wrestling training.

Although they were carrying a firearm and bear spray, the artifices were not enough to prevent the accident. At first, Kendall Cummings tried to fend off the animal by screaming and throwing objects at it, according to the college student. Unsuccessfully, the boy decided to grab the mammal and pulled it up, grabbing it by the ear.

After the grizzly had left, the two had to walk more than five miles to the beginning of the trail where they started their hike. The pair were rescued after calling the country’s emergency service, 911.

“I can’t even express how grateful I am for him. I don’t know what I’m going to pay him, I don’t know. I owe him everything. We’ll be best friends for the rest of our lives,” Brady Lowry said after being saved by his colleague.

Previous iPhone 2G is worth a FORTUNE: do you still have one?
Next Game of Thrones almost created a romance that would be slaughtered by viewers