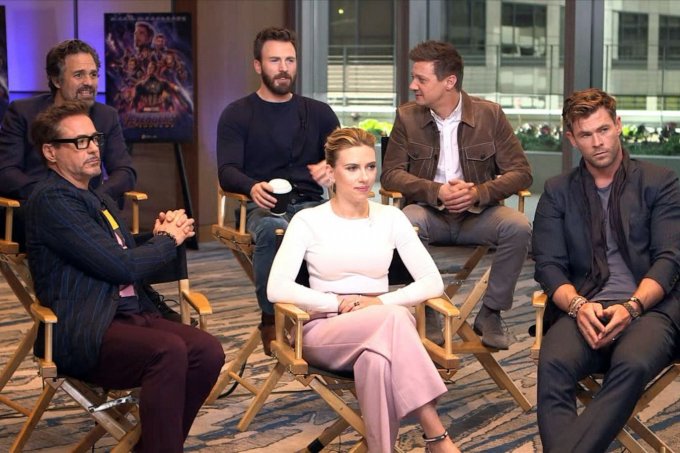 Find out which actors earn the highest salaries at Marvel

With numerous blockbusters memorable, Marvel is one of the most profitable movie studios of all time. By the way, Avengers: Endgame — starring Robert Downey Jr., Scarlett Johansson, Chris Hemsworth, Chris Evans and other stars — holds the record for the second highest grossing film in history, second only to avatar.

With that, one can imagine that the cache of the stars of the Marvel Cinematic Universe is equally impressive. Who will earn more? Chris Pratt as “Peter Quill”? Robert Downey Jr. like “Iron Man”? Or Scarlett Johansson playing the iconic “Black Widow”? Find out below:

Five million dollars might seem like a low amount considering the actor has starred in blockbusters like Guardians of the Galaxy and Jurassic World. However, insiders from the film industry claim that this was the payment received by the star just to be a supporting in Avengers: Infinity War.

Brie Larson — who lives in captain marvel in the MCU — is tied with Chris Pratt on the list. However, we must consider that US$ 5 million (according to information from The Hollywood Reporter) was the salary received by the star to star in his first solo film at Marvel. With the sequel confirmed for July 28, 2023, it’s safe to say that the Oscar-winning actress is expected to minimally double her fee.

Even before reaching extraordinary levels of popularity at Marvel, Benedict Cumberbatch was already a well-loved actor by the public. Proof of this are acclaimed productions such as The Imitation Game and Sherlock, starring the star. Add that to the good reception that Doctor Strange received since its first volume, and it’s understandable why Cumberbatch received a salary of $6.4 million to play Stephen Strange in the franchise’s continuation. It is worth remembering that the actor is confirmed in Avengers: Secret Warswhich is scheduled for release in 2026.

Paul Rudd has a solid comedy career. For this reason, few could imagine him playing a hero in the MCU. In the end, the charisma that the actor brought to the role of Ant Man ended up being one of the biggest attractions of the film for the public and specialized critics. With all that good reception, Rudd was paid a staggering $8 million just for a cameo in Avengers: Endgameaccording to Forbes.

Among all the Avengers, Hawkeye is the only one that didn’t get a solo movie, getting “only” a series on Disney +. However, the apparent lack of popularity did not prevent Renner from receiving a salary extremely similar to those of the great protagonists of the studio. According to Forbes data, Jeremy earned an impressive $15 million to play Hawkeye in Avengers: Endgame.

Replacing Edward Norton as Hulk, Mark Ruffalo didn’t take long to reach a legion of fans with his portrayal of the character. And even though he missed out on the chance to star in the hero’s only solo film — released in 2008 — Ruffalo also received $15 million to star in. Avengers: Endgame, the same amount as many of her co-stars, according to data from The Hollywood Reporter.

Captain America has become one of the most iconic characters in the Marvel Cinematic Universe, thanks to Chris Evans’ unforgettable performance. Consequently, it’s not a big surprise that Evans has one of the highest salaries in the studio. According to Forbes, the actor was paid $15 million to star in Avengers: Endgame.

Now we come to the MCU elite: in third place is Chris Hemsworth, who was paid $20 million to return in Thor: Love and Thunder, according to Variety. Before joining the studio, the actor was not that popular. However, the star quickly helped shape the image of Thor in theaters, turning the character into one of the most cult heroes by the public.

Scarlett Johansson has been with Marvel Film Studios for over a decade, being one of the longest-running stars at the studio. However, with the simultaneous release of Black Widow in theaters and streaming, Johansson had to face Disney in court due to a breach of contract.

According to the star, the studio assured that the release of his first solo film would happen exclusively on the big screen. On the other hand, Disney ended up publicly disclosing that the star received a fee of US$ 20 million, one of the largest in Marvel’s history, to star in “Black Widow”.

Robert Downey Jr. not only was the actor kick-starting the MCU with Iron Man, but also helped shape the image of the Marvel studio as we know it today. So it’s not surprising that the star holds the record for the highest salary in the Marvel Cinematic Universe, according to Forbes data.

Previous “Russia is no longer a trusted friend or partner,” said Olaf Scholz
Next Ex-promise of Santos has ‘shock’ in Série D and seeks a fresh start in 2023