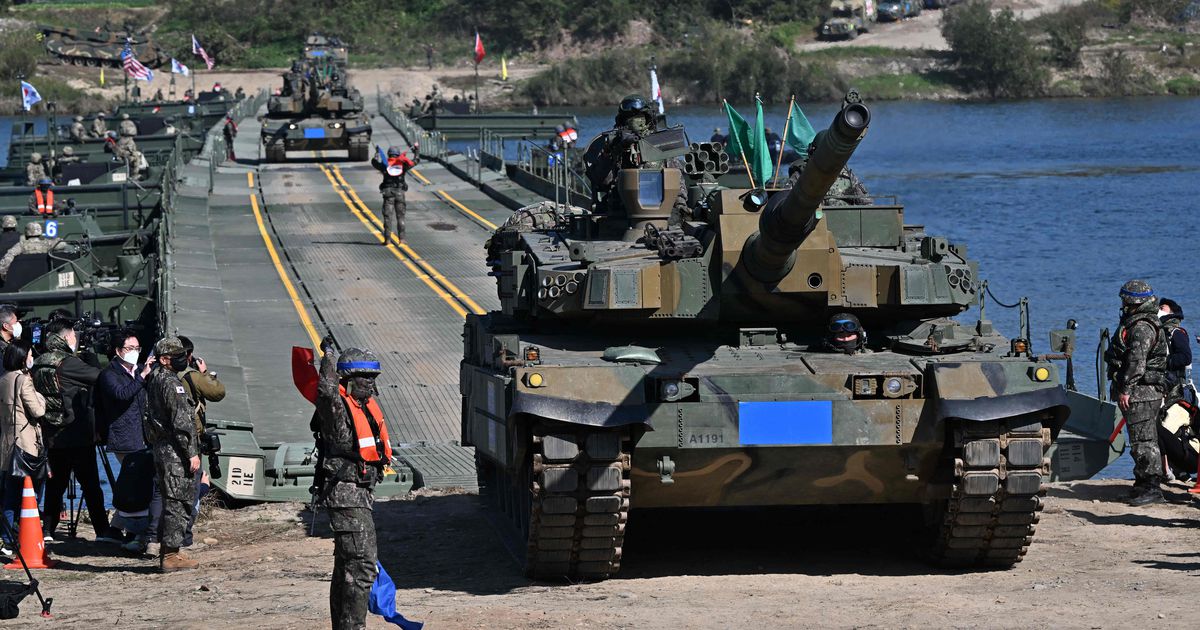 SEOUL – A North Korea fired new artillery shells near the maritime borders with the South Korea on Tuesday, the 18th, the day after the neighboring country started annual military exercises in partnership with the United States. In a statement released on Wednesday, the 19th, Pyongyang says tests are a response to South Korean maneuvers.

According to Joint Chiefs of Staff of South Korea, at least 100 projectiles were launched on the west coast and another 150 on the east. While they did not land in southern territorial waters, the South Korean military said the tests hit the northern part of maritime buffer zones that the two Koreas established under a 2018 military pact aimed at reducing line animosities. front.

This is the second time North Korea has fired projectiles into the buffer zones since last Friday.when it launched hundreds of projectiles in its most significant direct violation of the 2018 agreement. The South Korean military stressed that North Korea must “stop provocations that undermine peace and stability on the Korean Peninsula” and added that it is increasing military readiness and, in coordination with the United States, monitoring the neighboring country’s movements’.

Hours after the shooting, a spokesman for the North Korean People’s Army General Staff released a statement saying the latest shots were in response to South Korean artillery training that reportedly took place on Tuesday, also in a border area.

already the South Korean Ministry of Defense claimed that the training would be a way of “improving operational capabilities to counter various types of North Korean provocations” and that an unspecified number of US troops United States should participate in this year’s exercises.

On Monday, the South began the annual exercises of Hoguk, which will last until October 28, and include the participation of Army, Air Force, Navy and Marine Corps units, in addition to some US troops. Added to this are the aerial maneuvers that Seoul and Washington plan between October 31 and November 4.

In the face of this, in recent weeks, North Korea has carried out a series of weapons tests in what it calls simulated nuclear strikes against South Korean and US targets in response to its “dangerous military exercises” involving a US aircraft carrier. United States.

The country sees the regular military exercises between Washington and Seoul as an invasion rehearsal. Since resuming testing activities on September 25, North Korea has tested 15 missiles. One was an intermediate-range ballistic missile that flew over Japan and demonstrated a range capable of reaching the US Pacific territory of Guam.

Last Friday, the North Korean army launched a ballistic missile – the ninth shell fired over a period of 20 days – and also carried out aerial maneuvers and artillery fire along the border in response to other live-fire exercises in Seoul. Tension in the region is reaching similar levels to 2017 as a result of North Korea’s increased frequency of projectile launches, the South’s responses and the possibility of a new atomic test, which would be the first in five years.

The North’s recent artillery tests tend to attract less external attention than its missile launches. However, it is noted that long-range artillery cannons deployed on the frontlines also pose a serious security risk to the populous metropolitan region of South Korea, which is about 50 kilometers from the border with North Korea. With last week’s offensives, the South has threatened to break the pact on the cessation of military hostilities with its neighbor if the Pyongyang regime carries out a new nuclear test amid the current escalation between the countries.

North Korea, which has been completely isolated from the outside since the start of the pandemic and has approved a weapons modernization plan in 2021, has refused to resume dialogue with the South or the United States. Foreign experts say the North Korean leader, Kim Jong-unmay want to use its expanded weapons arsenal to pressure the United States and others to accept their country as a legitimate nuclear state and lift economic sanctions on the North. /AP and EFE