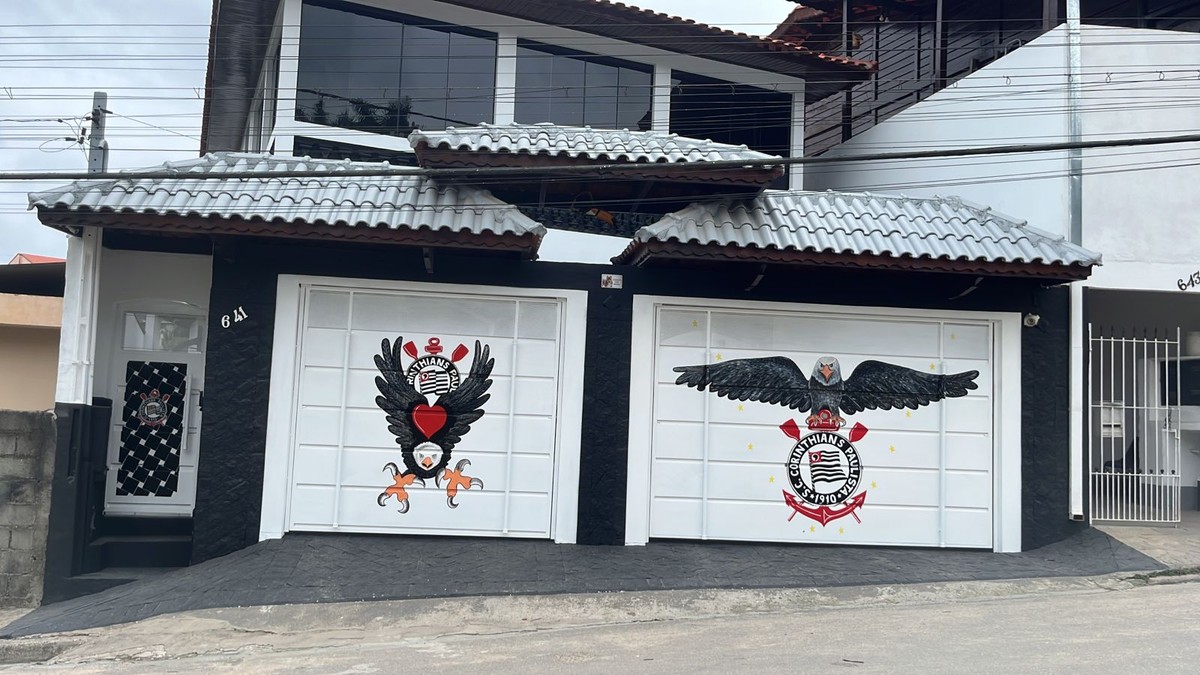 With shields on the gate and even on the fridge, Corinthians builds a “100% black and white” house in SP | football

Known for its tranquility and for being the city where the Tietê river begins, small Salesópolis, in the metropolitan region of São Paulo, has among its 17,000 inhabitants a fan who has turned his house into a true sanctuary for Corinthians.

Anyone who visits rural producer Marcello Vinícius Duque, 52, sees black and white from all sides. The Corinthians symbol is, for example, on the door of the house, on the refrigerator door and on the telephone. Even decorative animals, such as a turtle and a frog, were given the club’s colors.

There are so many that Marcello is not sure how many Corinthians items he has, but he estimates that there are more than 500, in a house that, as he likes to say, is 100% black and white.

External area has a Corinthians symbol and is all black and white — Photo: Personal Archive/Marcello Duque

Motivated by this love, he is confident in a Corinthians victory over Flamengo this Wednesday, at 9:45 pm, at Maracanã, and consequently in winning the fourth championship of the Copa do Brasil. The first game of the final, last week, in São Paulo, ended 0-0.

– I started doing this in 2000, when Corinthians was world champion in Rio de Janeiro, against Vasco. I already designed the gates, then I started decorating the house. I had a lot of items from Corinthians, so I thought: now I’m going to start decorating my house, because I like the black and white colors. I did it little by little. Every four years, I was always increasing something, until I reached 100% now – said Marcelo, who explained that, at the beginning of this year, the house was still “60% Corinthians”.

The house’s room has items from Corinthians and only the club’s colors — Photo: Personal Archive/Marcello Duque

Marcello has lived in the “Corinthian house” since 1996, but his passion for the club began well before that, curiously after a disappointment. Corinthians lived in a long line and hadn’t won a title since 1954. In 1976, the team reached the final of the Brazilian Championship, but lost to Internacional. The fast would only end in 1977, with the conquest of the Paulista Championship.

Marcello (on the left) and his cousin, on the day of the São Paulo title in 1977 — Photo: Arquivo Personal/Marcello Duque

– Then comes 1977, which was that party. I was seven. That stuck in my head. I lived in Suzano, Corinthians was champion, and I, a little kid, went out on the street at night. My mother looking for me and couldn’t find me. I was at the Corinthians party, when I was seven years old. From then on, Corinthians infected us.

Marcello (left) next to his uncle, also from Corinthians — Photo: Arquivo Personal/Marcello Duque

From the horn to Timão’s jeans

Marcello’s love for Corinthians is not restricted to the house. An example of this is his car, which has a horn that plays the club’s anthem.

– The horn was a special edition in the state of São Paulo. A friend of mine bought it and gave it to me as a gift. It was an edition like this: it came out and soon after it was gone. The horn has no value, it has no price to pay. She is worth more than the car – jokes the fan.

Besides, you don’t even have to enter the house to realize that a fanatical Corinthians fan lives there. Anyone passing along the street sees two white gates with the Corinthians symbol drawn next to a hawk. The entrance door also has the club crest. To complete, the sidewalk differs from the neighbors and is black.

– I see a lot of kids take a picture, put it on Facebook, WhatsApp status. Excursions that come to the plant, park, sometimes stop the bus here, and the kids are taking pictures. Sometimes I want to go into the garage and I even have to wait for them to take a picture so I can drive in with my car, in the middle of the service. But it has become a tourist spot here in Salesópolis, the “home of Corinthians”.

The refrigerator door has the design of the Corinthians symbol — Photo: Personal Archive/Marcello Duque

Corinthian objects are diverse and are scattered around the house, which is all decorated in black and white: sculptures, pillows, cups, books, dolls, among others.

Marcello still has hundreds of Corinthians-related clothing items, from game shirts, sweatshirts, watches, a suit he adapted with a small badge, and even a pair of club jeans.

– Friends who are not Corinthians laugh, make fun, right? But who is Corinthians is beautiful. Only those who are anti-Corinthian don’t like it. I really like it. This is love, a passion, a soul thing. Soul and heart.

The Salesópolis fan has three daughters and two grandchildren, who do not live in the Corinthians house, but who also support the club. His girlfriend, Fernanda, doubted such a collection at first, but was later surprised.

– When he told me that he was Corinthians, that his house was all Corinthians, that he had a wardrobe full of Corinthians shirts and all the accessories, I kept thinking: “Is it true?”. When I came here and saw all this, I said, “Really, he’s part of the crazy bunch.”

Expectations for the final

This Wednesday, Corinthians is going in search of its fourth title in the Copa do Brasil, after having also won the competition in 1995, 2002 and 2009.

After the 0-0 draw at Neo Química Arena, Timão needs to beat Flamengo at Maracanã by any score to take the cup. In the event of a tie, the decision will be on penalties.

Marcello will watch the final of the room, his favorite corner of the “Corinthian house” and which, of course, is 100% black and white.

Flamengo and Corinthians decide the title of the Copa do Brasil – Photo: Marcos Ribolli

Previous Sequel to Godzilla vs. Kong has cast and synopsis released
Next In audio, boss confesses to having guided employees to put cell phone in their bra to film vote in Bahia | Elections 2022 in Bahia