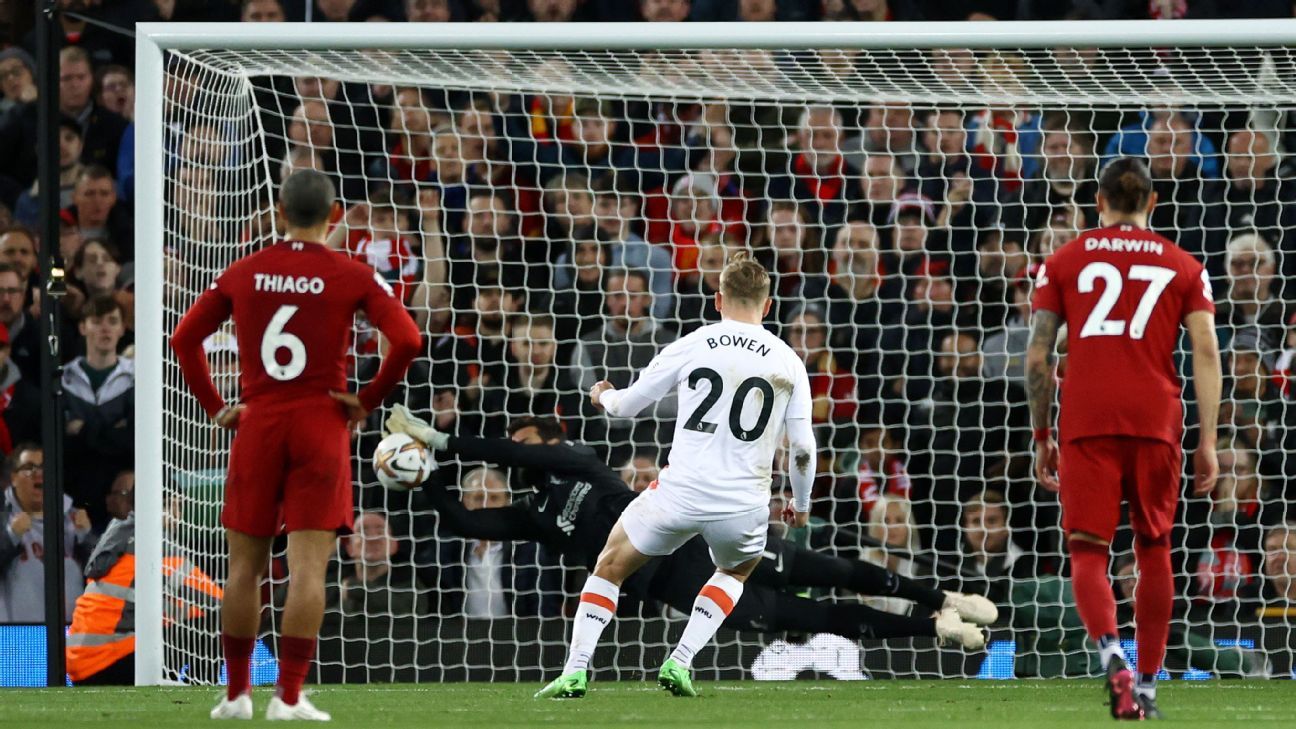 O Liverpool won the second in a row this Premier League. This Wednesday (19), Jurgen Klopp’s men made 1 to 0 at the West Ham, at Anfield, for the 11th round of the Premier League. O goal was scored by Darwin Núñez. Even in the first half, Alisson saved a penalty.

the visitors could not count on the Brazilian Lucas Paquetáwho suffered a collarbone injury but not at risk of missing the World Cup.

Liverpool appeared to be on the cusp of a 1-0 win over Manchester City, obtained last Sunday (16), by the Premier League. Jurgen Klopp’s team didn’t let West Ham breathe and piled up scoring chances from the opening minutes. The first big opportunity came with Darwin Núñez, in the 14th minute.

The Uruguayan had his foot down, but Fabianski made a beautiful save to stop the party at Anfield. However, the wait for the goal lasted only six minutes. In a cross on the left side of Tsimikas, the ball went to Darwin Núñez’s head, who tested it to the ground, with no chance for the goalkeeper, to make it 1-0.

From there, Liverpool was very close to defining the match. In a sort of ‘blitz’ for the Reds, Salah and Darwin Núñez piled up new opportunities, stopping at the crossbar and lacking in aim. The Reds had full control of the duel, but an isolated play almost put everything to lose.

In the 41st minute, Joe Gomez arrived late behind Bowen in a ‘dead’ throw in the area. VAR reviewed the bid and called the referee, who awarded West Ham a penalty. In the kick, Bowen himself fell under the pressure of Alisson, who flew into the low right corner, made the save and made Anfield ‘explode’ in celebration.

Even in the last move, West Ham started to scare again, but Kehrer tested out. The second half started with the same intensity as the first, but with the visitors trying to keep the ball a little longer and look for spaces to create. The problem is that, with that, Liverpool started to have space.

In the first ten minutes, Henderson and Salah had good chances to extend the marker, but they failed. On the other side, West Ham were trying to figure out how to ‘stick’ Liverpool without being vulnerable to the counterattack.

In the 17th minute, Roberto Firmino had a clear chance to score the second. The Brazilian received a cross in the measure of Henderson, in the small area, but finished on top of the marking. Soon after, the Brazilian had another good opportunity with a header, but it stopped at the goalkeeper.

Unable to ‘kill’ the match, Liverpool saw West Ham scare at 25 minutes with Benrahma, who didn’t take advantage of the cross at the second post, finishing on top of Alisson. In the 33rd minute, Zouma tried to cut through Henderson’s cross and sent the ball straight to the crossbar, almost scoring against it.

In the final stretch of the match, with three forwards, West Ham was on top of Liverpool, who continued to waste counterattacks and could not ‘kill’ the confrontation. In the 38th minute, Salah managed a good escape, but stopped in Fabianski after pushing the ball too far.

In the sequence, Alisson returned to action by operating a ‘miracle’. After a throw from the right side, the ball was cleared for West Ham to finish in the small area. Soucek hit with a right, but the Brazilian left his foot in the corner to make an incredible intervention and save the Reds.

Even with some pressure from West Ham, Liverpool managed to hold on to victory and leave the field with another Anfield triumph.

Liverpool are in 7th place with 16 points, five more than West Ham, who are in 13th.

Not just for scoring a goal, Núñez made West Ham’s defense hell. The Uruguayan bothered the defenders and was responsible for at least three clear chances for Liverpool.

Valve escape and one of the ‘brains’ of West Ham in the creation, Fornals practically failed to threaten Liverpool and ended up being substituted in the second half.

Liverpool visit the Nottingham Foreston Saturday at 9:30 am. Now West Ham face the bournemouth, on the 24th, at 5 pm. Both matches will be broadcast live on ESPN on Star+.