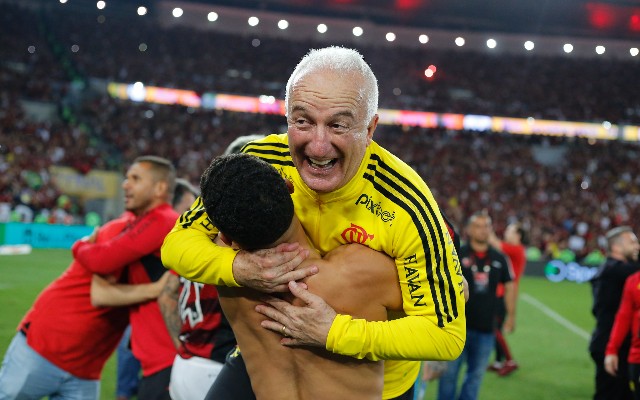 In front of a packed Maracanã, Flamengo defeated Corinthians 6-5 on penalties this Wednesday (19) and, with that, became four-time champion of the Copa do Brasil. One of the main characters in this achievement of Rubro-Negro, Dorival Júnior commented on the importance of the title for his career and highlighted that his heart’s desire made him want to return to Mais Querido.

— It’s my second championship of the Copa do Brasil, which has a very big and important weight, even after the period away. It was my heart that brought me back to Flamengo. I felt I needed to go back to Flamengo, I didn’t imagine it would be this year, but when the invitation came I didn’t think twice even though I had a commitment to the Ceará team that I respect a lot — declared, before concluding:

— I spoke with the president, explained my feelings regarding the previous departures and the open work to be done. I had 16 championships, five runners-up and 11 competitions won. Now I have the 12th with the possibility of the 13th title in a few days. For everything we went through throughout the year, in which no one else believed, Flamengo turned around, recovered and deservedly reached two competition finals. What for me is pleasurable and an immeasurable satisfaction to live again — declared Dorival Júnior, after the game.

It is worth noting that, after a start to the season well below Flamengo, it was after the arrival of Dorival Júnior that the team started to get back on track. With a good tactical work and recovery of some athletes of the cast, the coach managed to take the Mais Querido to the title of the Copa do Brasil.

With this achievement, Dorival Júnior reached his second trophy in the competition. The first won happened in 2010, when the coach was still in charge of Santos. In addition to the national knockout, the commander also adds in his career titles such as the Recopa Sul-Americana (Internacional), the Brazilian Championship of the Series B (Vasco) and eight state titles, for several clubs.

Now, Dorival Júnior has another excellent opportunity to take another big step in his career. On October 29, Flamengo will play in the Libertadores final against Athletico-PR. The big decision takes place at 17:00 (Brasilia time), at the Estadio Monumental Isidro Romero Carbo, in Guayaquil, Ecuador.

Before this confrontation, however, Flamengo returns to the field on two occasions for the Brasileirão. Next Saturday (22), Mengo will visit América-MG, at 19:00 (Brasília time), at Arena Independência. On Tuesday (25), Mais Querido will face Santos, at 21:45 (Brasília time), at Maracanã. The matches will be valid for the 33rd and 34th round for the national competition.