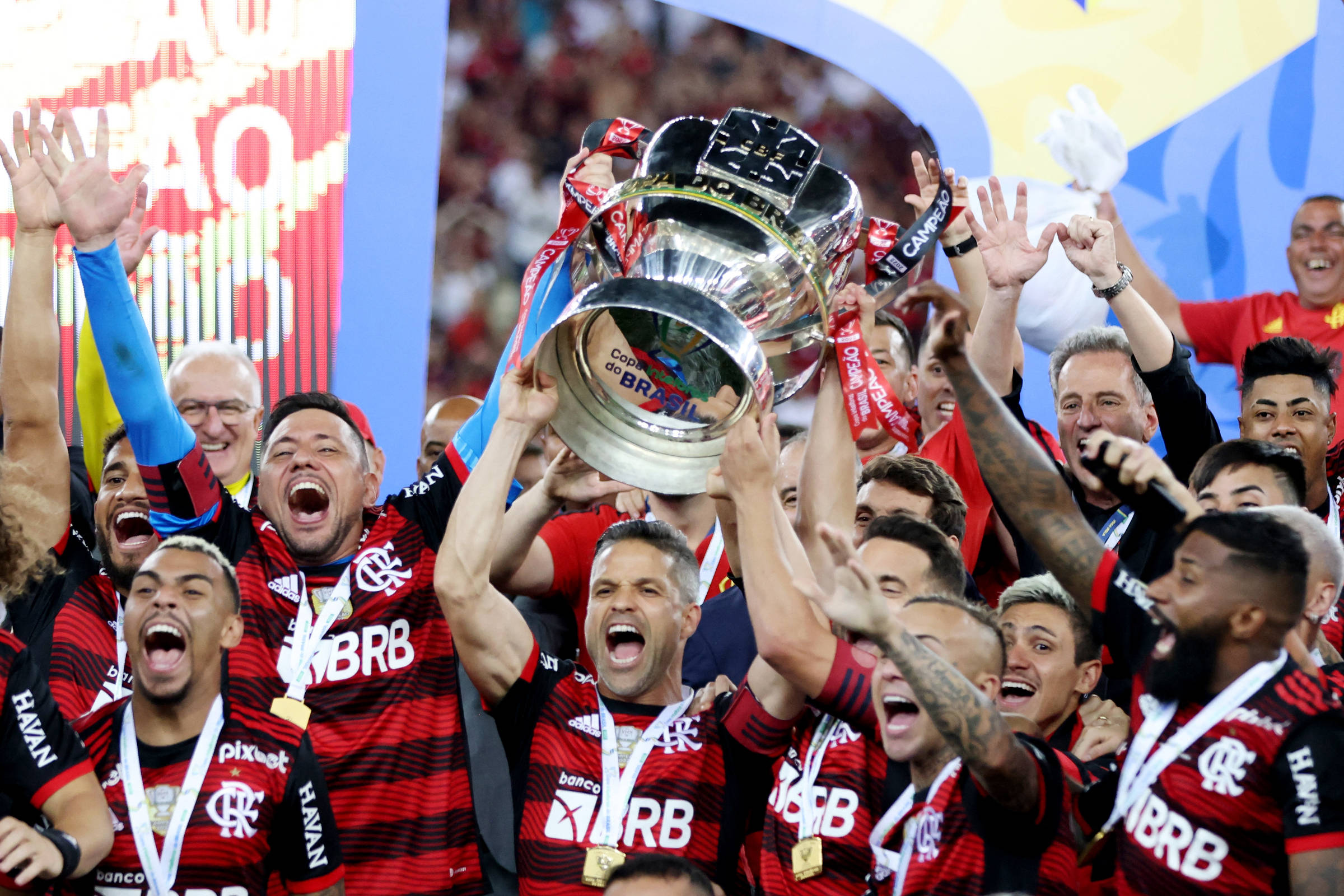 In the first final of a major tournament between the most popular clubs in the country, Flamengo gave.

The red-black team won the Copa do Brasil on Wednesday night (19), at Maracanã, in Rio de Janeiro. After a goalless draw at the Itaquera stadium, in São Paulo, they drew 1-1 with Corinthians and won 6-5 on penalties. It thus repeated a feat obtained at the beginning of the financial restructuring that made it a national and continental power.

Dorival Júnior’s men took the lead early on, with Pedro, and had chances to expand, but they were given a goal by Giuliano in the 37th minute of the second half. In the tiebreaker, they were behind, after a mistake by Filipe Luís, but they had failures from Fagner and Mateus Vital. Rodinei, on the last ball, decided.

Three-time champion of the tournament in 2013, when it was still in an almost chaotic financial scenario, with a debt of around R$ 750 million, the club reached the fourth, in 2022, in another condition. According to the balance sheet released in the middle of the year, net debt had fallen to R$466 million, with revenue for the season estimated at R$1 billion.

The organization’s reorganization would change its “level” – a word that became famous in the mouth of striker Bruno Henrique, in one of the many recent achievements –, but it was only after the Eduardo Bandeira de Mello administration (2013-2018) that the greatest achievements came. Rodolfo Landim, a former ally, took over in 2019 and has led the team through a period of good fortune.

The 2013 Copa do Brasil was the only triumph of Bandeira de Mello’s period that surpassed the state barrier. In Landim’s two terms, before glory over Corinthians, Flamengo won two editions of the Brazilian Championship (2019 and 2020), two of the Supercopa do Brasil (2020 and 2021), one of the Copa Libertadores (2019) and one of the Recopa Sul. -Americana (2020).

It was with Bandeira de Mello, elected at the end of 2012, that the financial conditions were created. But it was with Landim that the powerful team took shape and began to accumulate trophies. Faced with a Corinthians that won the World Cup for a decade and was unable to remain at the top – the current debt is around R$ 1 billion –, the superiority of the red-black squad made a difference.

In the balanced first leg of the decision, the best chances were red and black. In the return duel – preceded by tension, with multiple invasion attempts by fans without tickets, with explosions of tear gas –, the initial grip of the hosts in front of a packed Maracanã paid off.

Vítor Pereira opted for a scheme with three defenders, so that there was always someone open on each side, in order to exploit the game changers. Dorival Júnior responded with Arrascaeta falling down the left, behind Fagner, and that’s how the goal came out. At seven minutes, the Uruguayan dominated there and played for Éverton Ribeiro, who left Pedro in Cássio’s face.

After a few stunned moments, Corinthians began to execute their strategy of rolling the ball, stayed with it more and grew. But the visiting team was exposed and was close to taking the second in several moments. In one of them, at 33, the only reason he didn’t find himself at a greater disadvantage was due to a slight impediment by Gabriel Barbosa.

At half-time, Pereira activated Adson and resumed the usual 4-3-3 formation. There was pressure, but it was Cássio who appeared to make a great save, when Pedro appeared in front of him again. The game was left open. Gabriel missed on one side. On the other hand, after a good exchange of passes, Róger Guedes missed a very clear chance, with an open goal.

Maracanã briefly exploded with another red-black goal disallowed for offside. Then he began to get irritated with the growth of his rival, who opened up more and more in search of a tie. And he reached it, at 37, after a cross, hits and kick by Giuliano. But, in penalties, the owners of the house celebrated.

Obtained in a very different moment from the one experienced in 2013, the title was only possible thanks to the tactical (and emotional) restructuring promoted by Dorival Júnior. He had already taken over the team on an emergency basis at the end of 2018, with satisfactory results, but Landim preferred to become president with his own coach.

Abel Braga did not get excited, but the Portuguese Jorge Jesus replaced him and created a powerful team, which took Liverpool to extra time at the 2019 World Cup. Jesus decided to return to Europe in 2020, and, although cups were raised later, it was difficult for the Flamengo returned to play convincing football.

The most recent failed attempt was with another Portuguese, Paulo Sousa. Then, in June, Landim activated the one he had discarded.

With his simple chat, Dorival won the sympathy of a group full of vain players. With a scheme that had been considered archaic – the diamond in midfield, popular in the 90s –, he optimized the production of midfielder Arrascaeta and achieved what his predecessors could not: he joined Gabriel and Pedro in attack. Now, he is in the Copa Libertadores final.

In the Copa do Brasil, the campaign until the decision had moments of some difficulty, especially against Atlético Mineiro and Athletico Paranaense. Against these opponents and against Corinthians, even with all the suffering, a strong squad built, in the bonanza, spoke louder, because the taps had been closed for almost a decade.

Previous Atltico receives approval and will make a sector without seats at Arena MRV
Next Zendaya doesn’t need a stunt double in her new movie, ‘Challengers’ – 10/19/2022