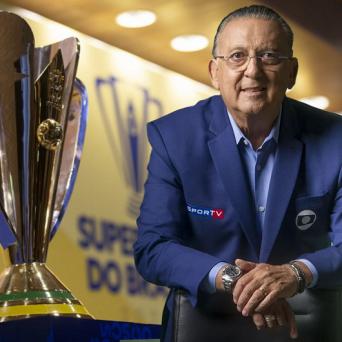 The storyteller Galvão Bueno should no longer leave Rede Globo this year. The 72-year-old announcer and the broadcaster would have extended their professional relationship, which has lasted 41 years, until the end of 2024. However, with new contractual clauses. The information is from the “TV News” portal.

In this new agreement, Galvão will be able to do other work on streaming without needing the approval of Rede Globo. The narrator will also be on the Globo team that will cover the Paris Olympic Games.

Galvão Bueno will remain the main face of Globo’s sports area, giving voice to institutional products and works. However, the narrator will no longer command the live streams of the games.

The new contract between the parties is already agreed. All that’s missing is Galvão Bueno’s signature, which should take place before the Qatar World Cup.

in contact with the THROW!, Globo reported that it recognizes the existence of conversations, but there is still no new contract signed. See the statement below:

Ever since it was announced that this would be Galvão Bueno’s last year in sports stories, in March, Globo’s interest in keeping this partnership of more than 40 years was public. In recent interviews, Galvão has been reinforcing this intention. Talks are ongoing, but there is still no signed contract. The focus is now on the coverage of the World Cup, which promises many emotions, on the Bem Amigos special on November 14, which will be shown on sportv and on TV Globo, and on the original Globoplay documentary with never-before-seen curiosities about life and narrator’s career.

Previous Ex-assistant of Rogério Ceni at São Paulo becomes favorite to take over Diego Costa’s team in the Premier League, says website
Next Fact or fake: see what is true and what is a lie about SAF in Bahia | Bahia