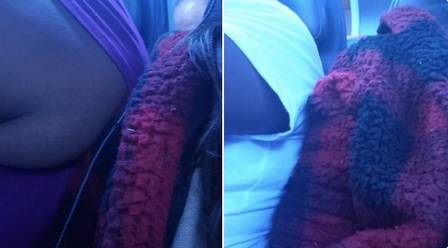 An Australian woman went viral on social media after complain about sitting between two obese passengerswho are brothers, on an American Airlines flight last week in the USA.

Influencer and journalist Sydney Watson posted photos of her “discomfort” and ended up being accused of fatphobia.

“Right now, I’m – literally – wedged in between two obese people on my flight. My entire body is being touched against my will. I can’t even put my arms on the backrests because there’s no space. I’m tired of acting like fat. was normal. I can assure you it is not”she wrote on Twitter. “That’s NOT acceptable at all, okay? If you need a seat belt extender, you’re TOO FAT TO BE ON AN AIRPLANE”she added in the complaint on the social network, where she has more than 320,000 followers (and more than 760,000 subscribers to her YouTube channel).

“If people want to be fat, fine. But it’s something completely different when I’m stuck between you guys with your arms rolling around my body for 3 hours”amended Sydney, who highlighted having offered the brothers the chance to sit next to each other, an offer that, according to the influencer, they refused.

Reactions on Twitter ranged from messages in support of attacks on charges of fatphobia.

“Did you ask them about their full medical histories? I’m tired of hearing people complain about fat people”posted an outraged netizen.

“You’re exactly where you’re supposed to be. I’m sorry they have to sit next to such an ugly person.”wrote another.

“We need to raise awareness of this issue. Campaign really, I’m not kidding. Carry-on bags are measured before boarding a plane, so there also needs to be an acceptable human silhouette.”said a man, supporting the influencer.

“I totally agree. They must buy two seats or fly first class. You paid for your seat and you are entitled to use it 100%”opined another.

The Australian, who also has a US passport, sent a complaint to American Airlines, receiving this response, according to the Daily Star:

“Our passengers come in all shapes and sizes. We’re sorry you felt uncomfortable on your flight. We offer a variety of seat sizes and styles so our customers can select what works best for them.”