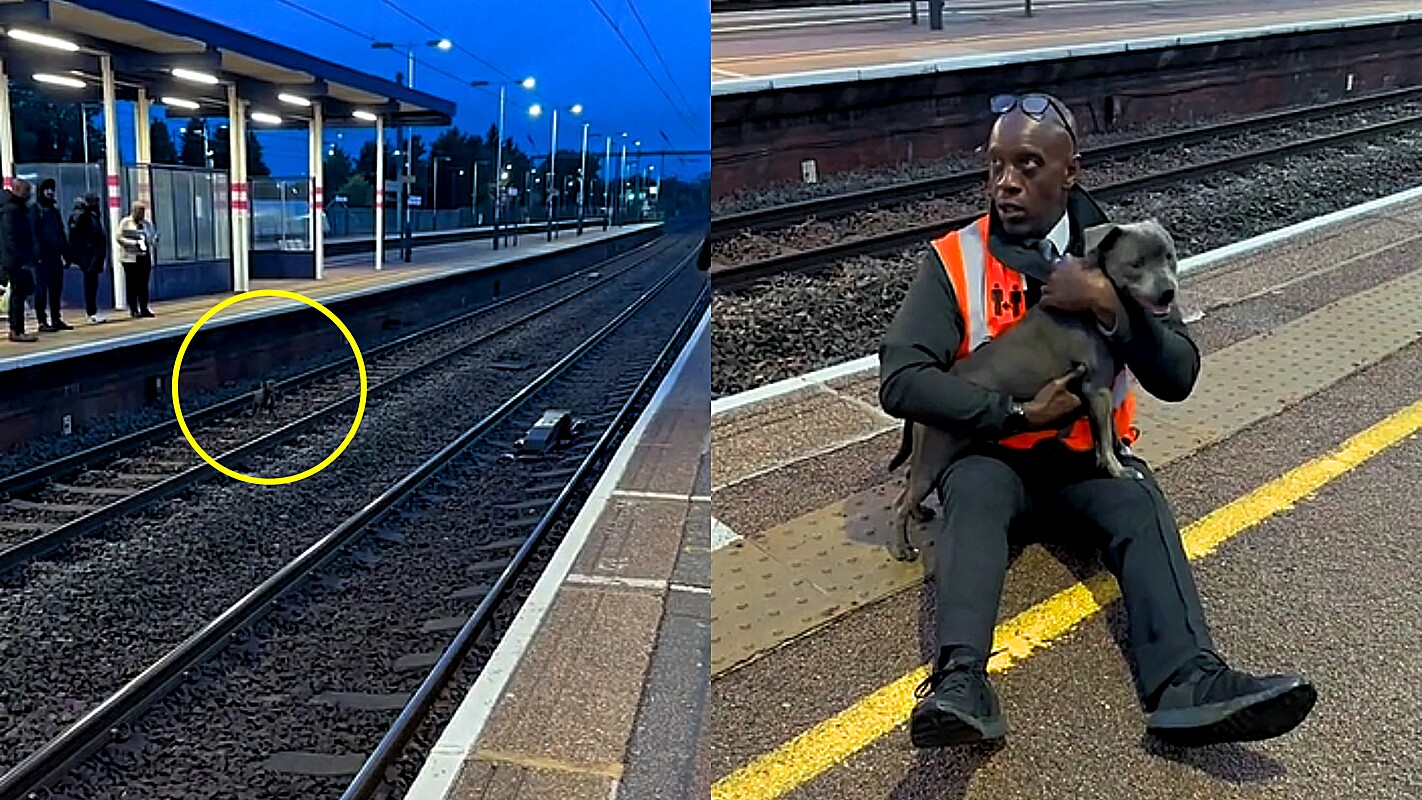 A Staffordshire bull terrier puppy was rescued from the tracks, close to train time. The hero was Paul Hawthorn, 56, a railroad station worker. The case took place in Luton, South East England, on October 17 at 7 am.

Many passengers waiting for the transport to arrive attended the rescue. Zoe was one of those people who hoped that everything would end well and, in addition to watching, she filmed the action and later shared it on her social media with the following caption:

“People leave dogs at stations like this all the time. For every bad person there is a good person.” Paul is part of the team of people who love their neighbor regardless of people or human.

In the images you can see the puppy running along the tracks. Seconds later, Paul is sitting on the platform holding the dog in his lap. In turn, the little dog licks him as if he was thanking him for saving his life.

In an interview with the news portal Newsweek, Paul said he was in the reservation room when someone informed him that there was a puppy roaming on the platform of the train bound for London. So he stepped forward and ran to the spot.

Arriving there, a woman had captured him, however, she could not keep him imprisoned, because her train had arrived, so she released him. When the train left, the pup jumped onto the tracks. Skillfully, the first thing Paul did was to notify the signalman and ask him to warn the engineers to slow down and stop if necessary.

“I’m not allowed to go down the lane but the guy from the coffee kiosk on the platform had some croissants and he lured the dog to the edge of the platform. He couldn’t jump back up but when he put his paws up to get the croissant, managed to catch him and pull him to the platform,” he recalled.

When he put his hands on the dog, Paul pulled him up and didn’t let go for anything, because he knew that if he did he would jump on the track again. “So I just held on and two people came and pulled me by my feet.”

After the scare, the man took him to the employees’ cafeteria. It was then that he discovered that the puppy had not been abandoned but had taken the opportunity of his open garage door to escape. The owner posted on social media in search of his whereabouts.

“It was quite traumatic at the time. I don’t own a dog, but we help people with a sitting dog and I felt sorry for the dog. I thought, ‘Oh my God, he’s going to get hit by a train. In the end it all worked out, it was a relief. “, finished.

The publication reached more than 4.2 million views, 249 thousand reactions and thousands of comments from netizens praising the man’s action.

“You are absolutely a hero! Thank you”, thanked one.

“Oh my God what a brave man! A very lucky dog. What a star you are sir,” commented a third.

What is comforting is that the puppy was not abandoned. Happy that Paul was there to save him and that in the end it all turned out well.