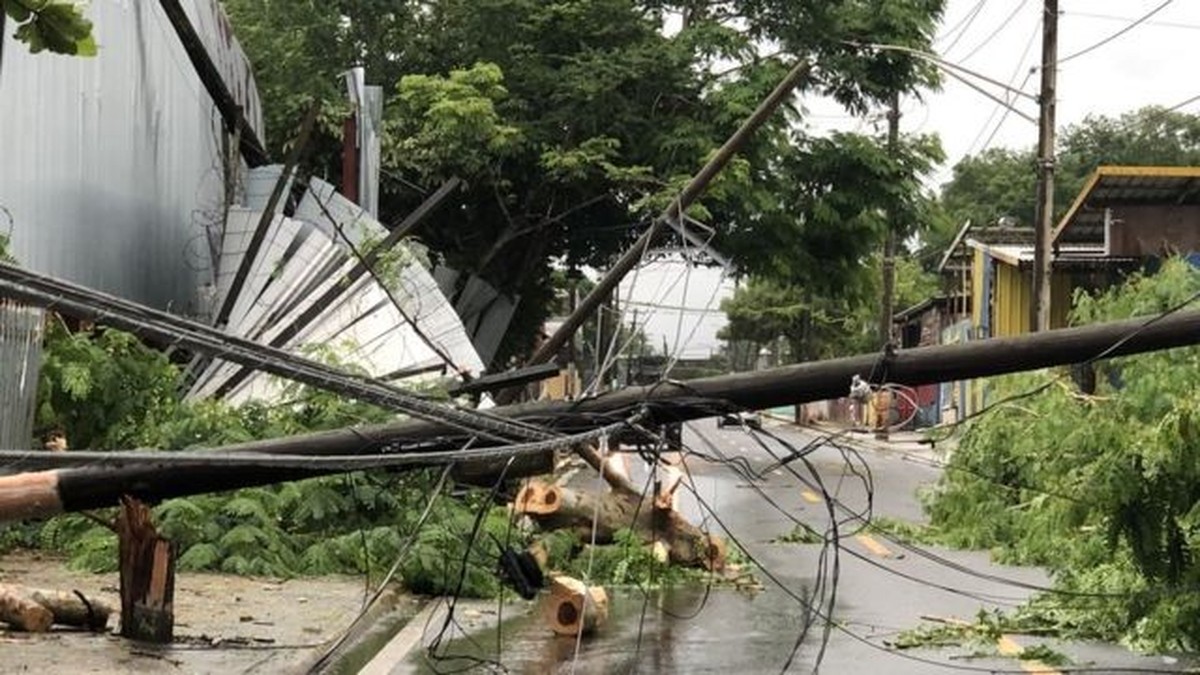 After going months without electricity because of the massive impact of Hurricane Maria in 2017, the government of Puerto Rico announced a “solution” to its energy crisis: privatizing the public monopoly that was responsible for this basic service.

Ricardo Roselló, then the island’s ruler – who resigned amid protests after the revelation of conversations in which he uttered misogynistic and homophobic insults – said at the time that the network would become “modern, efficient and less costly”.

Four years later, the privatization of the energy company is far from fulfilling what had been promised and the entire territory is in a fragile situation due to the constant atmospheric phenomena that affect it.

On the island, the blackouts continue.

As occurred on September 19, after the scourge caused by Hurricane Fiona, which arrived as Category 2, with winds of 137 km/h, and caused a general blackout that took about a month to be fully repaired.

But before the storm, the lives of Puerto Ricans were already hampered by constant power outages.

Under Luma Energy’s administration, which began in June 2021, the average duration of power outages has worsened, says Jonathan Castillo Polanco, a professor specializing in environmental health and climate change, who also works as a manager for Renewable Energy at the NGO Federation. Hispanic.

“With the new operator of the energy distribution and transmission network, everything has changed for the worse. It’s public data”, he tells BBC News Mundo, the BBC’s Spanish service.

According to the expert, figures from the Department of Energy, a public body that must oversee the private monopoly, indicate that, on average, a customer in Puerto Rico spent 1,268 minutes without power during Luma Energy’s first year.

While before the arrival of the company, the expert calculated, the time was 1,243 minutes, which represents an increase of 25 minutes.

All this despite the US Congress allocating about $10 billion to rebuilding the electrical system after Cyclone Maria, which destroyed infrastructure.

Although the crisis originated decades ago, in the last five years the situation has become even more serious — Photo: GETTY IMAGES

Although the crisis originated decades ago, over the past five years it has been common for hospitals in Puerto Rico to be without power for hours, leading to reliance on generators for patients who need hospital machines. It is also common for young people to study with flashlights in the dark of night.

There are those who blame Luma Energy for the situation. The company did not respond to a BBC News Mundo interview request, but it insists on its website that it has installed thousands of new electric lighting poles, initiated 52 modernization projects and reduced the number of blackouts but not the average duration of blackouts.

In this context, BBC News Mundo analyzed the causes of the energy crisis that affects Puerto Rico and that puts the lives of its inhabitants in check on a daily basis.

Luma Energy is a US-Canada consortium that began operating in the territory in June 2021, after a bidding process that was not fully public.

The contract signed in Puerto Rico guarantees the administration of the central areas of the electricity system for 15 years, through services such as transmission, distribution, collection and customer service. She receives monthly payments of up to $1.5 billion.

The plants that generate the energy, built decades ago, and which run on high-cost fossil fuels, were left in the hands of the government.

After the Hurricane Maria disaster, some Puerto Ricans were without electricity for up to a year — Photo: GETTY IMAGES

In addition, as part of the agreement, the consortium will not have to invest in rebuilding the island’s infrastructure, but will take care of the revitalization with money approved by the US federal government.

“These processes have a degree of secrecy, because they are negotiations, but in any other US jurisdiction, privatization would have been made with greater clarity for the population. We do not know what conditions were rejected in the transaction”, says Ramón Luis Nieves, a lawyer expert on energy issues, who was a senator in Puerto Rico before the arrival of Luma Energy.

When the contract was signed, Nieves continues, there was some opposition from some sectors of the population, but another large part supported it. Especially since it happened after the Hurricane Maria disaster, when some Puerto Ricans were left without electricity for up to a year while the system was operated by the government.

Why does electricity fail so much in Puerto Rico?

The complex electrical system that Luma Energy operates, designed in the 1960s, is located primarily in southern Puerto Rico, far from power demand, which is to the north by the capital San Juan and industrialized areas.

From there, says Jonathan Castillo Polanco, miles and miles of power lines stretch from an interconnected system that brings light to all regions of Puerto Rico.

The biggest problem, he adds, is that if any of the connections or power plants fail, the entire system around the territory is affected.

“In a hurricane area, having a system like this is very vulnerable. There are kilometers and kilometers of line and if something happens at a single point on that line, whether it’s a landslide or a tree, it leaves the whole country without power”, explains the specialist, who has done research on the infrastructure of the electrical system.

But beyond that, the plants that Puerto Rico owns, which operate with extremely toxic fuels, such as Bunker C, have minimal capacity to respond to changes in energy demand. This means that when there is a failure in a generating plant, for example, “the whole system becomes destabilized and shuts down”.

Castillo Polanco also points out that, for years, the electrical network has not been properly maintained. It hasn’t been modernized either. And he believes this is due to a “lack of political will”.

The Puerto Rico Electric Power Authority, the public entity that operated the energy before the arrival of Luma Energy and that maintained the generation plants, has public debt of US$ 9 billion and is insolvent.

The public body, which did not respond to a BBC News Mundo interview request, did not invest the money in upgrading the infrastructure, but in operating expenses, such as subsidizing the purchase of fuel to give consumers relief, Castillo Polanco said.

Luma Energy made this fact one of its arguments to defend the current problems of the electrical system.

“By almost all measures, Puerto Rico has the worst performing electrical system in the United States,” company president Wayne Stensby said in an interview with NBC in October last year, in which he acknowledged that “the biggest challenge is the speed with which we can bring real improvements to our customers.

But the biggest problem with the company’s privatization, respondents agree, is the lack of qualified employees who are familiar with Puerto Rico’s complex electrical system.

When privatization took place, faced with a possible change in their salaries and benefits, around 3,000 workers from the public company requested transfers to other areas of the government.

“Knowing Puerto Rico’s energy system requires years of experience. All that knowledge is now in other areas,” says attorney Nieves.

“The people brought in by the company did not know how to operate the complexity of the network”, adds Castillo Polanco.

According to data from the Department of Energy released in August, Luma Energy has about 1,200 employees in the territory. But the company in all its public communications claims to have 3,000 workers.

“While Luma Energy gets an employee to attend to a situation on the grid, hours pass while that employee tries to understand what is happening”, says former Senator Nieves.

The system, he continues, should have the ability to connect to each other to meet energy demand, but also, in the event of an error in one area, the others should be able to isolate themselves and function on their own.

On the island, he points out, tens of thousands of people have chosen to implement battery-powered solar panel systems in their homes. But this brings a problem of inequality, because poor communities, which do not have the economic capacity to acquire them, remain connected to the network with problems.

And this, he indicates, will be the main challenge that Puerto Rico will face in the future, when it invests the money destined by the US government to seek “energy justice for all”.

But the reconstruction process, estimated by the island’s own public company, could take around 10 years.

Of the US$ 10 billion allocated by Congress, Nives indicates that only about US$ 40 million was used, due to bureaucratic impositions by US agencies and the management of Luma Energy.