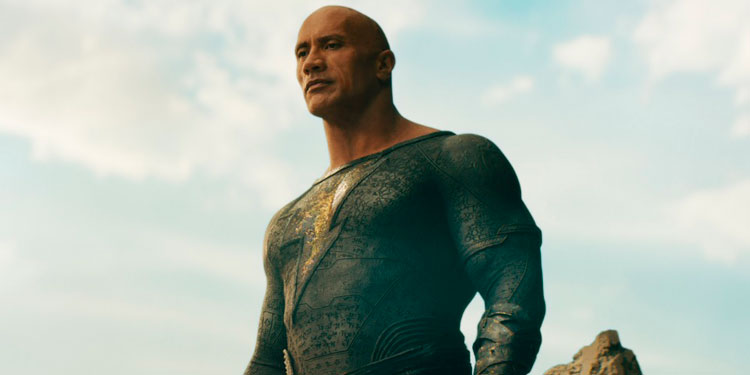 The Rock puts muscles to work in ‘Black Adam’, which premieres this Thursday

Character created by Otto Binder and CC Beck, in 1045, Black Adam made his first appearance in the debut issue of “The Marvel Familiy”, from the extinct Fawcett Comics, as one of the villains of Captain Marvel, who would later be renamed as Shazam. When DC Comics acquired the rights to the publisher’s superheroes and villains in 1973, he was introduced, as well as his great enemy, in the same universe as Superman, Batman and Wonder Woman. In recent decades, the character has come to be represented as an anti-hero, and that is how he appears in “Black Adam”, which premieres this Thursday (20).
Virtually unknown to non-comic book audiences, the character had a film project running through the halls of Warner Bros for about 15 years. Initially, he would be introduced in 2019’s “Shazam!”, but plans have changed. And one of the main responsible for that was Dwayne “The Rock” Johnson, a fan of Black Adam and who from the beginning was involved with the project, so much so that he refused to play several other superheroes just to have the chance to play the role of his brothers. dreams.
The feature directed by Jaume Collet-Serra (who worked with Dwayne Johnson) takes much of the origin of Black Adam in the comics to introduce him to the DCEU (DC Extended Universe). The story begins around five thousand years ago, when Teth-Adam (Johnson) was a slave in the fictional kingdom of Kahndaq; he is chosen by the wizard Shazam (Djimon Hounsou) to receive the powers of the Egyptian gods (just as Billy Batson would receive the powers of the Greek gods in “Shazam!”) to defend his people. However, corrupted by power, he is imprisoned by the mage.
Cut to the present day. Kahndaq still exists, but the country is dominated by a criminal organization called Intergang. Archaeologist Adrianna (Sarah Shasi) is one of the forces trying to liberate the nation and ends up freeing Teth-Adam while searching for a crown made with the valuable metal eternium, which is exploited by Intergang.
Freed from his prison, Black Adam emerges as the liberator of his people, but his unorthodox methods of acting as a hero – a concept, by the way, quite foreign to him – draw the attention of the US government. To prevent the destruction and death from the superpowered being, Task Force X head Amanda Waller (Viola Davis) scales from the Justice Society to Kahndaq. It will be up to Hawkman (Aldis Hodge), Doctor Fate (Pierce Brosnan), Atom Crusher (Noah Centineo) and Cyclone (Quintessa Swindell) to convince Black Adam to moderate his actions, if only by force.
With one of Hollywood’s biggest and most popular stars so dedicated to the project, Warner decided to risk a good part of its chips on the film. Thanks to the charisma of Dwayne Johnson, “Black Adam” is on a mission to take the DC Extended Universe to the same level of critical and public success as the Marvel Cinematic Universe. Warner has already shown that it is possible to turn around with “The Suicide Squad” and “The Batman”; the question is whether a production that has divided the critics will manage to become a success at the box office, at least, or a forgettable production like “Wonder Woman 1984”.