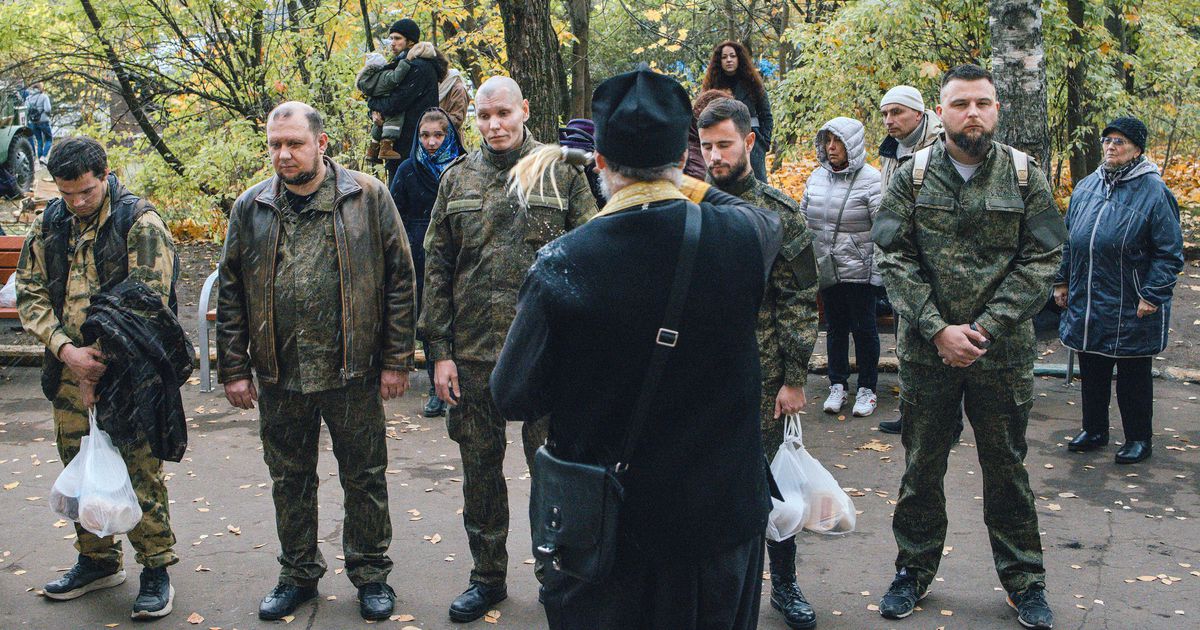 Where are the Moscow men? After Putin’s Order to Mobilize Recruits, They Disappeared

MOSCOW — Friday afternoons at the Chop-Chop Barbershop in central Moscow used to be busy, but at the start of a recent weekend, only one of the four chairs was occupied.

“Normally we would be full by now, but about half of our customers are gone,” said the manager, a woman named Olia. Many of the customers – along with half of the barbers as well – fled the Russia to avoid the President’s decree Vladimir Putin to mobilize hundreds of thousands of men for the war in ukraine.

Many men have avoided the streets for fear of receiving early warning. When Olia arrived at work last Friday, she said, she witnessed authorities at each of the subway station’s four exits, checking documents.

Her boyfriend, who was a barber at the salon, also ran away, and the breakup is taking its toll. “Every day is difficult,” acknowledged Olia, who, like other women interviewed, did not want her surname to be published, fearing reprisals. “It’s hard for me to know what to do. We always planned as a couple.”

She is not the only one. While there are still plenty of men in a city of 12 million people, across the capital their presence has noticeably dwindled – in restaurants, in the hipster community, and at social gatherings like dinners and parties – especially among the city’s intellectuals, who often have an income. available and passports for travel abroad.

Some men left when the war in Ukraine broke out; others who opposed the Kremlin generally fled because they feared imprisonment or oppression. But most of the men who left in recent weeks were drafted into the military, wanted to avoid the military enlistment or feared that Russia might close its borders if Putin declared martial law.

No one knows exactly how many men have left since Putin announced what he called his “partial mobilization”. But hundreds of thousands of men are gone. Putin said on Friday that at least 220,000 had been drafted.

At least 200,000 men went to neighboring Kazakhstan, where Russians can enter without a passport, according to local authorities. Tens of thousands of others fled to Georgia, Armenia, Azerbaijan, Israel, Argentina and Western Europe.

“I feel like we are now a country of women,” said Stanislava, a 33-year-old photographer, at a recent birthday party that was attended mainly by women. “I was looking for male friends to help me move some furniture and noticed that almost all of them were gone.”

Many married women remained in Moscow when their husbands fled, or after receiving a povestka – a summons notice – or before anyone could arrive.

“My friends and I meet for wine, talk and support each other, to feel that we are not alone,” said Liza, whose husband, a lawyer for a large multinational corporation, received a warning several days before Putin announced the mobilization. . He quit his job and fled to a Western European country, but Liza, 43, stayed behind because her daughter is in school and all her grandparents are in Russia.

Women whose husbands have been summoned also suffer from loneliness, which is overshadowed by the fear that their spouse may not make it back alive.

Last week, at a voenkomat, or military commissariat, in northwest Moscow, women, mothers and children gathered to say goodbye to loved ones sent to fight.

“These men are like toys in the hands of children,” said Ekaterina, 27, whose husband, Vladimir, 25, was indoors preparing to be sent to a training camp outside Moscow. “They’re just cannon fodder.” She wished he had avoided the subpoena, saying it would have been better for him to stay in jail for a few years than to come home dead.

If Muscovites were able to indulge in a hedonistic summer in which it seemed that nothing had drastically changed since the invasion of Ukraine, the situation is very different as winter approaches and the consequences of war, including sanctions, become more evident.

On Monday, the mayor of Moscow announced that the mobilization in the capital had officially ended. But many companies were already feeling a slowdown. In the two weeks following the summons, the number of orders in Moscow restaurants with an average check of more than 1,500 rubles – about $25 – decreased by 29% from the same period last year. Sberbank, Russia’s biggest lender, closed 529 branches in September alone, according to the newspaper. Kommersant.

Many downtown windows are empty, with “FOR RENT” signs hanging. Even Russia’s flagship Aeroflot has closed its office on chic Petrovka Street. Nearby, the shop windows where Western designers continued to exchange their mannequins during the summer were finally covered with paper.

“It reminds me of Athens in 2008,” said Aleksei Ermilov, founder of Chop-Chop, comparing Moscow to the Greek capital during the global financial crisis.

Ermilov said that of the 70 barbershops in his franchise, those in Moscow and St. Petersburg were the ones that most felt the absence of men.

“We can see the massive relocation wave more in Moscow and St Petersburg than in other cities, in part because more people have the means to get out of there,” Ermilov said.

Local media reports that membership in one of Moscow’s biggest strip clubs has dropped by 60% and that there are also fewer security guards available because they have been mobilized or fled.

Meanwhile, dating app downloads have increased significantly in the countries Russians have fled to. In Armenia, the number of new registrations on a dating app, Mamba, has increased by 135%, a company representative told RBK, a Russian financial media outlet. In Georgia and Turkey, the new download rate was over 110%, while in Kazakhstan it increased by 32%.

“All the more reasonable guys are gone,” said Tatiana, a 36-year-old woman who works in tech sales, as she watched a game of pool with her friends at a women’s social club on trendy Stoleshnikov Lane. “The dating pool has decreased by at least 50%.”

During the summer, the alley was full of cool young Russians having fun. But on a recent Saturday night, it was relatively empty.

Tatiana said many of her clients left, but she said she would stay. Her job doesn’t allow remote work and she said she didn’t want to subject her dog to a plane ride.

But other Muscovites still plan to leave. Another member of the women’s club, Alisa, 21, said she had just graduated and wanted to save enough money to leave Russia as soon as her friends finished their studies so they could rent a house abroad together.

“I don’t see a future here in Russia, at least not while Putin is in power,” she said.

For the men who stayed, navigating the city became stressful. “I try to drive everywhere, because they can hand out summons on the street and near the subway,” said Aleksandr Perepelkin, marketing director and editor of Blueprint, a fashion and culture publication.

Perepelkin stayed in Russia because he felt an obligation to his 100+ employees to keep the company going. But now his offices remind him of the early months of the coronavirus pandemic. coronavirus because of all the missing people. He and his business partners don’t know what to do.

“Marketing is the kind of business you do in normal life,” but not in times of war, he said in a posh cafe and coworking space. The place was almost entirely filled with women, including a group celebrating a birthday with a flower-arranging class.

At the Chop-Chop barbershop, Ermilov, the founder, said something similar. In late September, he left for Israel and now plans to open a business that has no physical presence in his home country.

Within Russia, barbershop managers were talking about the possibility of expanding services that cater to female customers.

“We talked about reorienting the business,” said Olia, the manager. “But it’s impossible to plan now, when the planning horizon has shifted to about a week.”