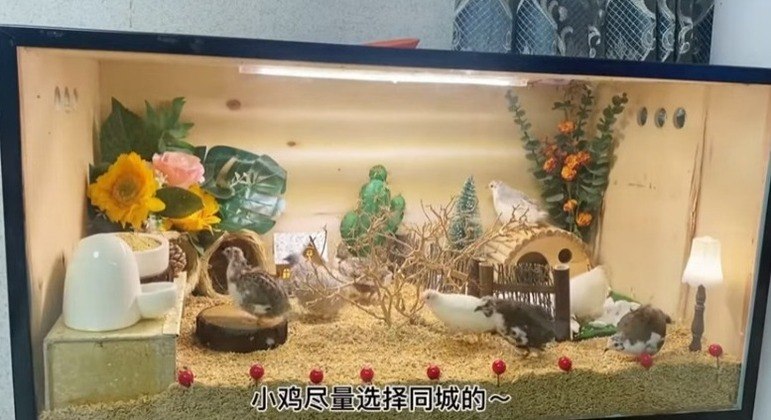 Chinese quail (coturnix chinensis), also known as the “smallest chicken in the world”, is very successful in China. The interest of the Chinese in the species became a real fever, and it didn’t take long for the bird to become a trend among pet owners in the country.

At about 50 cm, the “chicken” proved to be a perfect pet for breeding in small urban environments, as is common in large Chinese cities.

Despite the nickname, it is worth saying that the animal is not actually a chicken. The Chinese quail is a mixture of quail and partridge, which gained fame because of its size, which varies between 12 cm and 14 cm.

The bird’s popularity began among breeders and owners of luxurious terrariums, as the species needs heat lamps and specific vegetation to live well. In videos shared on social networks, they show the routine of dealing with the species, including the ritual of harvesting the eggs it lays.

The Chinese quail reproduces very easily and can lay eggs 300 days a year. The eggs live up to the title of the smallest chicken in the world, as they are smaller than those of the quail.

Despite being great for a small room, the quail needs a lot of care. Pups need the temperature of the environment to be kept between 35ºC to 38ºC, while adults live with around 20ºC to 30ºC.

The pet’s owners show off the luxurious environments they give it — full of lights, plants, stairs and even bedrooms, practically a doll house.

Smell is another factor to take into account, no different from farm hens. There are already several products created to prevent the strong odor of animals and excrement from proliferating in small rooms.

One of them is the herb bed, formed by rice husk, wood chips, tea stalks, sawn wood and soy flour, which, combined with biological yeast, can automatically decompose the feces.

Previous Brazilians can now install the new ID on their cell phone; learn how to download
Next Halloween: 6 costumes we bet will rock this year – Makeup