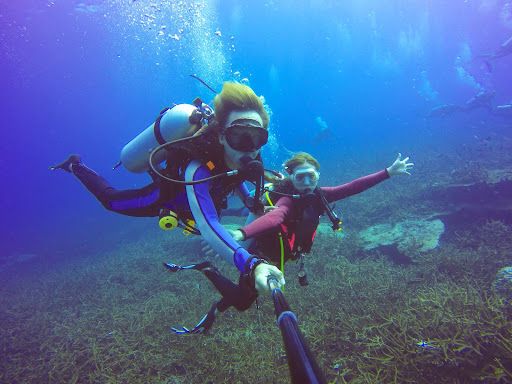 Celebrities dive for leisure and for the profession • SiteBarra

Diving is a common activity among celebrities, whether for leisure or for the profession. Actors and actresses cast in roles that involve the practice often need certification. In the same way, celebrities who dive for fun also end up getting certified.

In general, the activity is considered by the artists as a challenging time, but full of satisfaction and relaxation due to the intense contact with nature. Davi Lucca, for example, son of Neymar, made baptism dive in Fernando de Noronha. The actresses Juliana Silveira and Juliana Baroni, at the time they starred in the cast of “Balacobaco”, a plot by Record, needed to take a diving class to live the adventures in the skins of their characters.

Certification can be achieved in several places in Brazil, such as in a Diving company in Ilhabela, for example, which offers courses for beginners and for people who are at a more advanced level, such as actor Caio Castro. Former participant of Big Brother Brasil and No Limite, Jéssica Mueller, delved into the region through the Ikigai Experience platform.

According to the Ministry of Tourism (MTur), Brazil attracts travelers from different parts of the world due to its scenery and tourist activities. Diving is one of them and appears as the second main attraction of the country, behind only the high demand for sun and beach.

According to the MTur, in waters of the most varied temperatures and colors, the practice of diving can be done with snorkel or cylinder, in the open sea or in waterfalls, in the presence of sharks or shoals, always allowing unique experiences that will take your breath away.

A number of international celebrities are also betting on scuba certification as a way to embody character or take a break from everyday stress. The activity is seen as a way to explore the underwater world.

Best Actress Oscar-winning actress for The Blind Side, Sandra Bullock, decided to become a certified scuba diver to overcome the discomfort she felt while being underwater. After a while of practice, she finds the activity relaxing.

Indian Bollywood actress Parineeti Chopra is an avid advocate of the ocean. She took her first breath underwater in 2013 when visiting Bali, and got certified for diving in August 2022.

Parineeti combines the fight in defense of the environment – ​​especially the protection of the seas – with the leisure provided by underwater moments.

The films The Abyss, Titanic and Avatar are proof that filmmaker James Cameron has a strong affinity for water. He learned to scuba dive when he moved to California and told reporters it is a way to escape to an alien world.

A diving curiosity about Cameron is that he has been to the deepest part of the ocean – the Mariana Trench.

Actress and producer Katie Holmes practices scuba diving as a way to take care of herself, both physically and mentally. She has been exploring the seabed for years and recently became a certified scuba diver.

One of the world’s most popular celebrities, Tom Cruise sees scuba diving as a way to relax when he’s not venturing into action scenes.

Cruise is known for doing his own stunts and has appeared in a few underwater sequences throughout his career as a result of his certification as a scuba diver. He also completed freediving courses for the film Mission: Impossible 5, in which he had to hold his breath for more than six minutes.

In addition to the celebrities mentioned, several others are diving practitioners, either for the requirements of the profession or for fun. Some examples include actors such as actors Leonardo DiCaprio, Tom Hanks, Matthew McConaughey and Pierce Brosnan; actresses like Jessica Alba, Kate Hudson and Salma Hayek; and celebrities such as professional golfer Tiger Woods, Duchess of Cambridge Kate Middleton and Duke of Cambridge Prince William.

For those who want to venture into the sport in Brazil, Búzios, Arraial do Cabo, Ilhabela, Fernando de Noronha, Bonito, Ilha Grande, Porto de Galinhas, Maragogi, Maracajaú and João Pessoa are some of the ideal destinations for the practice. The locations were cited by TripAdivisor as traveler favorites for providing experiences in idyllic settings.

Previous 10 best movies with The Rock
Next “They had…”; Gabigol leaves clubism aside and delivers Corinthians superiority at Maracanã