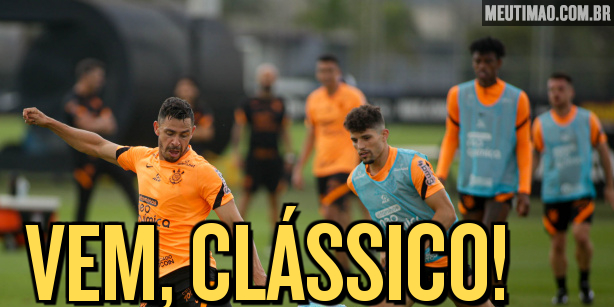 This Friday, Corinthians finalized the preparation to face Santos, for the Brazilian Championship. At CT Joaquim Grava, the team performed the second and last preparatory training with an eye on the opponent from the lowlands.

The athletes started the day’s activities inside the training center. Then, the players went to the lawn to start activities with the ball, together with Vítor Pereira’s coaching staff.

The coach also carried out ball possession training on a reduced field. Finally, the group performed offensive and defensive dead balls with an eye on the classic alvinegro.

As adopted throughout the season, the club no longer discloses the players listed for the match, and the official lineup will only be known one hour before the ball rolls. A possible starting team has Cassius; Fagner, Balbuena, Gil and Lucas Piton (Fábio Santos); Fausto, Du and Renato Augusto (Giuliano); Gustavo Mosquito, Yuri Alberto and Róger Guedes.

Corinthians and Santos face each other in a duel that could be fundamental to Timão in the fight for a spot among the four best teams in the Brazilian Championship. At the moment, with one less game in the table, the alvinegro team occupies the fifth place.

Previous Glen Powell turns 34: Check out 11 productions with the heartthrob
Next Learn how to hide WhatsApp online