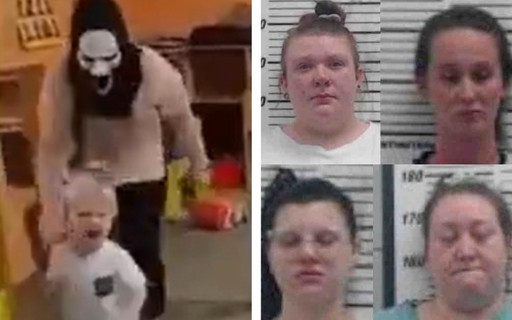 Five employees involved in the viral videos in which they appear scaring children at a daycare center in Mississippi, in the US, have been arrested and charged with crimes related to child abuse.

The information was published by the WTVA and the New York Post.

The scenes that shocked the web show women running after children with a mask that resembles that of the horror film franchise ‘Scream’.

According to the publications, Sierra McCandless, Oci-Anna Kilburn, Jennifer Newman and Shyenne Shelton face three counts of crimes related to child abuse. Traci Hudson was charged with misdemeanor for failing to report abuse and simple assault against a minor.

“I was completely shocked by what I witnessed,” said mother Katelyn Johnson. “My blood pressure has increased. It broke my heart for my son. I was angry,” continues the woman, who reveals that her 2-year-old still shows signs of trauma and has trouble sleeping through the night.

“I hope you are enjoying the prison. And I hope you realize that what you did was serious. It wasn’t a joke. It wasn’t funny at all.”

Owner Sheila Sanders, who said at the time she was not aware of the situation, has not been charged with any crime. She confirmed that four of the employees were fired immediately after she saw the footage.

“The people who did these acts are no longer with us. They were fired. I wasn’t here at the time and didn’t know they were doing this. I don’t condone it and never have. I just want to say that it has been resolved.”

The four suspects charged with crimes appeared in court on Thursday morning and had their bonds set at between $15,000 and $20,000.

The abuses took place in September and on the 4th of this month. An employee puts on the mask and enters the children’s room. She starts to frighten everyone as screams and cries take over the ambient sound. The despair of the little ones is quite visible, but the woman doesn’t seem to care and gets very close to the faces of some.

While the masquerade scares, another points to children who didn’t behave or who didn’t clean the place. Some even run and hide in despair.

According to the Daily Mail, the former employee responsible for wearing the mask spoke about the matter in a lengthy statement and apologized; she had worked there for four years. “It wasn’t made to harm anyone and it wasn’t out of malice. I didn’t go there with the intention of literally traumatizing those kids,” said the woman who identified herself as CeeCee at the time. She also explained that she took the mask to daycare to scare a co-worker, before it was “used inappropriately”.

On social media, the scenes generated outrage among netizens. “That was one of the most disturbing things I’ve ever seen,” said one. “All of them should be accused of child abuse, publicly named and banned from working again,” detonated another. “What I hated most about it…is that no one stopped her. Nobody took off the mask. Nobody corrected it”, observed the third.

Previous Google Messages, Phone and Contacts will get new icons and functions soon
Next Model Emily Ratajkowski speaks out on relationship status after rumors of romance with Brad Pitt