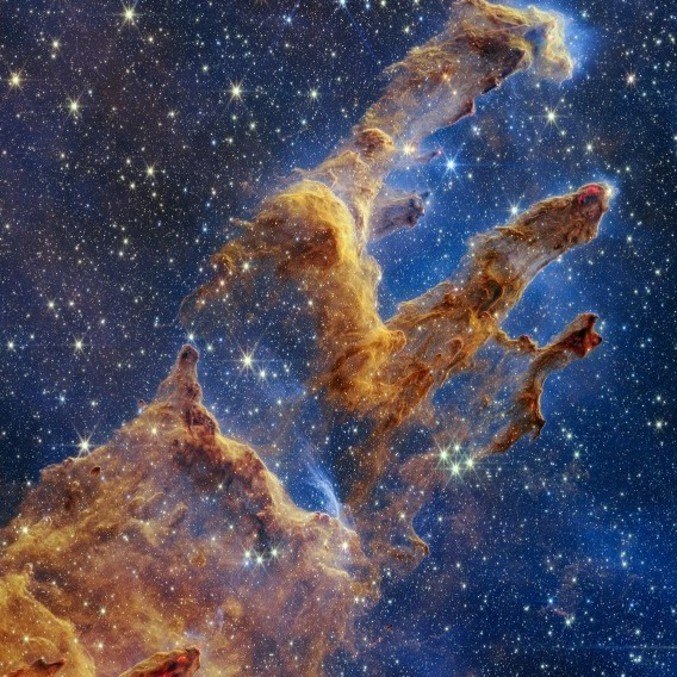 The James Webb telescope has captured new images of the iconic Pillars of Creation. The pillars are clouds of dusty hydrogen located in the constellation Serpent, about 6,500 light-years from Earth.

In addition to the incredible images recorded by the telescope, it is important to remember that the last records of the pillars were taken in 2014 and 1995, both by Hubble.

Webb was launched in 2021, as a replacement for Hubble – it is even worth seeing the photo in very high quality on the NASA website.

According to scientists, the Pillars of Creation are at the center of an active region of star formation, in the Eagle Nebula, or Messier 16 (M16).

Thanks to infrared light detection technology, Webb’s new photos appear more detailed than Hubble’s previous ones, as they are able to show the new stars in formation.

“I’ve been studying the Eagle Nebula since the mid-1990s, trying to see ‘inside’ the light-year pillars that Hubble showed, looking for young stars inside them. I always knew that when James Webb took pictures of them, they would be stunning. . And they were”, says Professor Mark McCaughrean, senior consultant at the European Space Agency, in an interview with BBC News.

On Wednesday (19), the photos were shared by NASA, which reported that the formation of stars can only be detected because of the dust on the pillars, which causes the light to be dispersed.


Ultraviolet light from stars near the Pillars of Creation is responsible for their formation. However, the radiation of light from these stars is also breaking down these massive space towers. Scientists say that if it were possible to transport to the site at this time, it is likely that the pillars would no longer be there.

We only see them in James Webb’s photos because we are looking into the past, as the light detected by the telescope is from 6,500 years ago.


READ BELOW: Solar flares and galaxy clash: see the best photos from space this week

Previous Flamengo’s schedule until the Libertadores final
Next “In My Mind and Me,” Former Disney Star Talks Depression, Anxiety