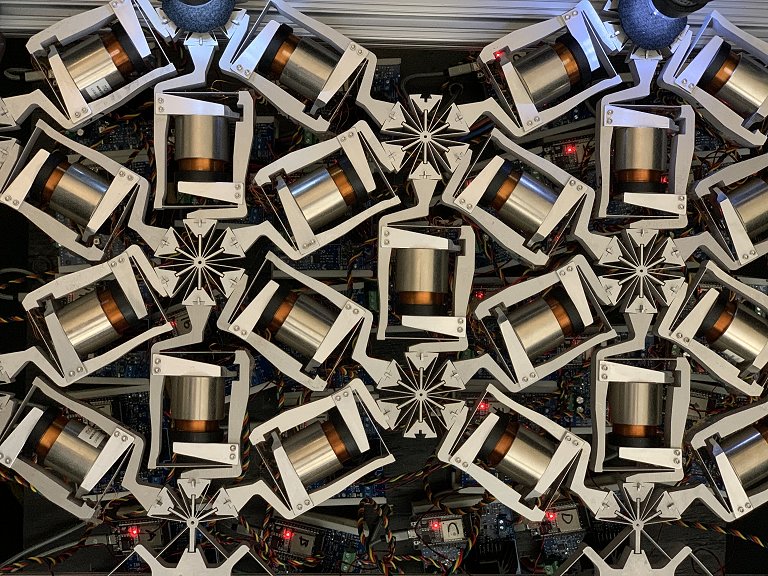 Just as a pianist learns to play his instrument without looking at the keys, or a basketball player spends countless hours making a seemingly effortless shot, mechanical engineers have transported a concept of machine learning, hitherto only used in machine learning, into the realm of machines. virtual realm, to create artificial intelligence programs.

Ryan Lee and his colleagues at the University of California at Los Angeles have created a new class of mechanical equipment that can learn behaviors over time and develop a “muscle memory” of its own, allowing for real-time adaptation to changes in external forces.

The material is composed of a structural system formed by adjustable beams that can change their shape and behavior in response to dynamic conditions.

According to the team, this “material that learns” will have applications in the construction of buildings, in airplane wings that adapt to flight conditions, in imaging technologies and many others, taking so-called metamorphic materials to a new level.

That’s because the material is essentially a mechanical neural network.

“This research presents and demonstrates an artificial intelligent material that can learn to exhibit the desired behaviors and properties after increased exposure to environmental conditions,” said Professor Jonathan Hopkins, the team’s coordinator. “The same fundamental principles that are used in machine learning are used to give this material its intelligent and adaptable properties.”

The prototype is the size of a microwave oven, but the team intends to miniaturize the basic units, to create metamorphic materials with various applications.
[Imagem: Ryan H. Lee et al. – 10.1126/scirobotics.abq7278]

Using and adapting concepts from artificial neural networks (ANNs), which are the algorithms at the base of machine learning, the researchers developed mechanical equivalents of the components of ANNs in an interconnected system.

This mechanical neural network (MNR) consists of individually adjustable beams arranged in a triangular lattice pattern. Each of these rods has a voice coil, similar to the ones that generate the sounds in the speakers; The difference is that here they work as sensors, measuring the tensions and bending to which they are subjected, and as actuators, allowing the rod to change its length. In the first case, it learns the movement and, in the second, it starts to adapt to the environment in real time, interacting with the other beams in the system.

Initially, the voice coil, which in the speakers converts magnetic fields into mechanical movement, detects the compression or expansion forces exerted on its stem, passing this data on to the learning algorithm. Acting as an actuator, it induces flexing and expansion, which means that each coil/rod assembly essentially functions as a flexible joint at the interconnections of the truss system.

An optimization algorithm then tunes the entire system, learning to determine the combination of stiffness values ​​of each flexible joint to control how the entire network should adapt to the forces applied to it.

Theoretical application of the mechanical neural network to the control of an airplane wing that changes shape in mid-flight.
[Imagem: Ryan H. Lee et al. – 10.1126/scirobotics.abq7278]

At its current stage, the system is the size of a microwave oven, but the researchers plan to simplify the RNM (mechanical neural network) design so that thousands of networks can be fabricated on a microscale inside 3D trusses, for practical applications of materials.

If this smart material is placed on the wings of planes, for example, it can learn to transform the shape of the wings based on the wind patterns during a flight, for greater efficiency and maneuverability of the plane. Building structures infused with this material can also self-adjust stiffness in certain areas to improve their overall stability during an earthquake or other natural disasters.

In addition to using the material in vehicles and building materials, the researchers suggest that MRIs could also be incorporated into armor to deflect shock waves or into acoustic imaging technologies to take advantage of sound waves.

Previous Brazilian giant sends Rodinei, from Flamengo
Next The Sad Truth About Why Chandler Went to Tulsa