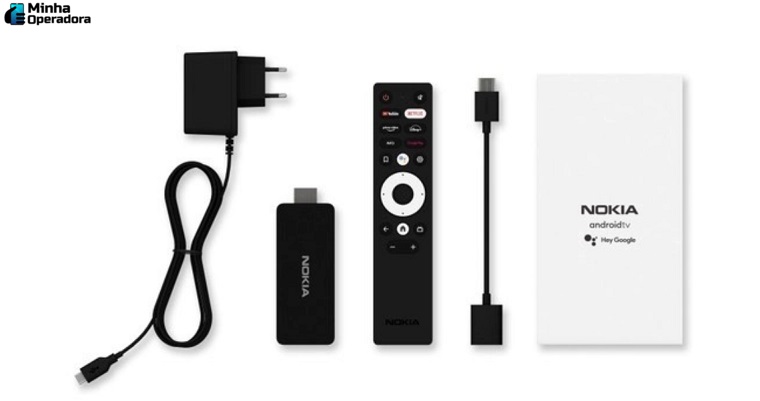 Nokia has launched its dongle on the market to transform TVs into smart and will compete with the Amazon Fire TV Stick, Mi TV Stick and Google Chromecast. However, this competition may not be achieved as much, since its price is relatively high compared to its rivals, making a direct clash with the recently launched model Chromecast HD.

The Streaming Stick 800 comes with support for Full HD 1080p resolution images, just like the Google device, but the product already comes with Android TV 11 installed instead of the latest version of the platform present in Google’s rival, which still gives access to more than 7 thousand applications via the Play Store.

In its remote control, the device offers backlighting, something it doesn’t have in its main competitors. With this, users will be able to more easily navigate between content at night or in dark environments.

In addition, the Streaming Stick 800 already comes with shortcuts to the most popular streaming apps such as YouTube, Netflix, Amazon Prime Video and Disney+, as well as direct access to the Play Store and Google Assistant, and the TV’s volume controls can be made by him.

Regarding connectivity, it comes with support for bluetooth pairing to connect with other mobile devices, as well as dual-band Wi-FI (2.4 GHz and 5 GHz) for accessing online content. Movies and series can still be streamed directly from the cell phone, just like on a Chromecast.

Internally, it comes equipped with an Amlogic S805X2 quad-core processor up to 1.2 GHz. It still has 1GB of RAM and 8GB of storage for apps and media.

The Nokia Streaming Stick 800 is not yet available in Brazil and there is no information on when it will arrive. It was presented on the European market with the official price of 59 euros, around R$305. That is, it is 20 euros (about 103) more expensive compared to the equivalent Fire Stick.