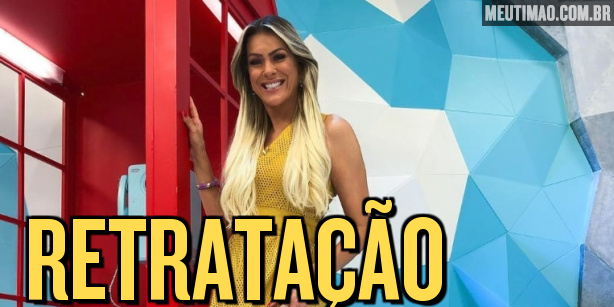 Renata Fan retracts after statements about Corinthians fans: ‘I made a joke’

Presenter Renata Fan made prejudiced comments this Thursday about Corinthians fans. After Fiel’s reaction, the club’s repudiation and statements against the presenter’s speech, she apologized, but said that she will not accept that people call her prejudiced: “If anyone was offended, I apologize”.

After the statement about the lack of intelligence and preparation of a Corinthians fan made by presenter Renata Fan, on the program Open Game, from TV Bandeirantes, Corinthians repudiated the comments and saw its fans offended by the presenter’s speech. According to her, commentator Chico Garcia could not support Corinthians: “You don’t match, Chico. You’re not a hustler, you’re a studied guy, you’re a multi-purpose guy. You wanted to be a Corinthians fan to please your wife,” said the presenter.

With the repercussion, Renata, during the program Open game this Friday, he portrayed himself with whom, in the words of the presenter, “he felt offended”.

“Yesterday there was a boring, bad situation, it just started with the comment I made to Chico Garcia. We have the vein of being serious and the joke also exists. People do not always interpret what is said the way we would like. I have a very long career, I have the humility to apologize, to portray myself doing things the right way. We are about to hit, miss, learn and reevaluate”, began Renata Fan – watch full speech below.

The presenter took the floor to speak, for more than three minutes, about her history on Brazilian television and the possible “misunderstandings” in the situation this Thursday.

“The relationship with human beings is like that. Respect between human beings is very important. I’m a person who’s only in football, because I’m a crazy fan, fanatical, crazy, hallucinated. If you saw me at the stadium, and it’s a pity that today I go to the stadium very little, I am a person who transforms myself. I run out of breath, I scream, I run out of voice, I fall in love,” the communicator continued.

Renata began her speech on the program by recalling the “joke” with Chico Garcia, whose wife is a public person and an open Corinthians fan.

“What I said yesterday was a joke with Chico, his wife is like me, he’s not like that, he’s quieter, the game ends, he’s already writing his text. I never wanted to say that in relation to social class, differentiation . You know why, when you enter the stadium, fans are the same, they don’t have sex or social class, everyone is the same. So, for Corinthians fans, if anyone thinks it was something serious, I apologize. I portray myself, because it is not my reality. I respect all fans, I’m transparent, colorada, I came out since 2003, at a time when you were considered partial. People criticized, people didn’t understand. Today it is more liberated, it’s good that we are in a democracy and those who preserve democracy and fight for it, will understand that the right things don’t always happen”, the journalist retracted.

Declared supporter of Internacional, Renata Fan had already been involved in controversy with Corinthians. In 2017, the presenter went public to apologize for throwing Corinthians shirt on the floor when celebrating a victory for the gaucho team.

“Having said that, I want to talk too, I will not accept being called prejudiced. I’m a person that to win in this career, with high heels, I wear a dress and I paint my nails, I’ve done more than three thousand live shows, I know I would have to be respected. I never used my feminine position to hide with weaknesses. But I am a woman who fought a lot and I fight a lot. I prepare myself, I try to speak the right words, I try to bring the best subjects here in the program, the best approaches. I want to give space to the people who work with me and I respect all of that. But I also want to be respected. I have a very long history, with successes and mistakes. To you, who sent me hatred and rancor, I command you, with benevolence and love, that what I went through, that you not be judged unfairly. For those of you who used my name, see my story and my principles and look at my family.”

With no repercussion from athletes on Renata Fan’s speech about the crowd, Corinthians is preparing for this weekend’s confrontation, against Santos, for Vila Belmiro, in the Brasileirão.

– People do not always interpret what is said the way we would like. I’m humble enough to apologize. I never wanted to talk about social class. If anyone was offended, I apologize.

Previous Keanu Reeves arrives in Brazil for a special appointment and has dinner with Barrichello, Massa and Whindersson in SP
Next 10 Tech News to Start Your Day (10/21)