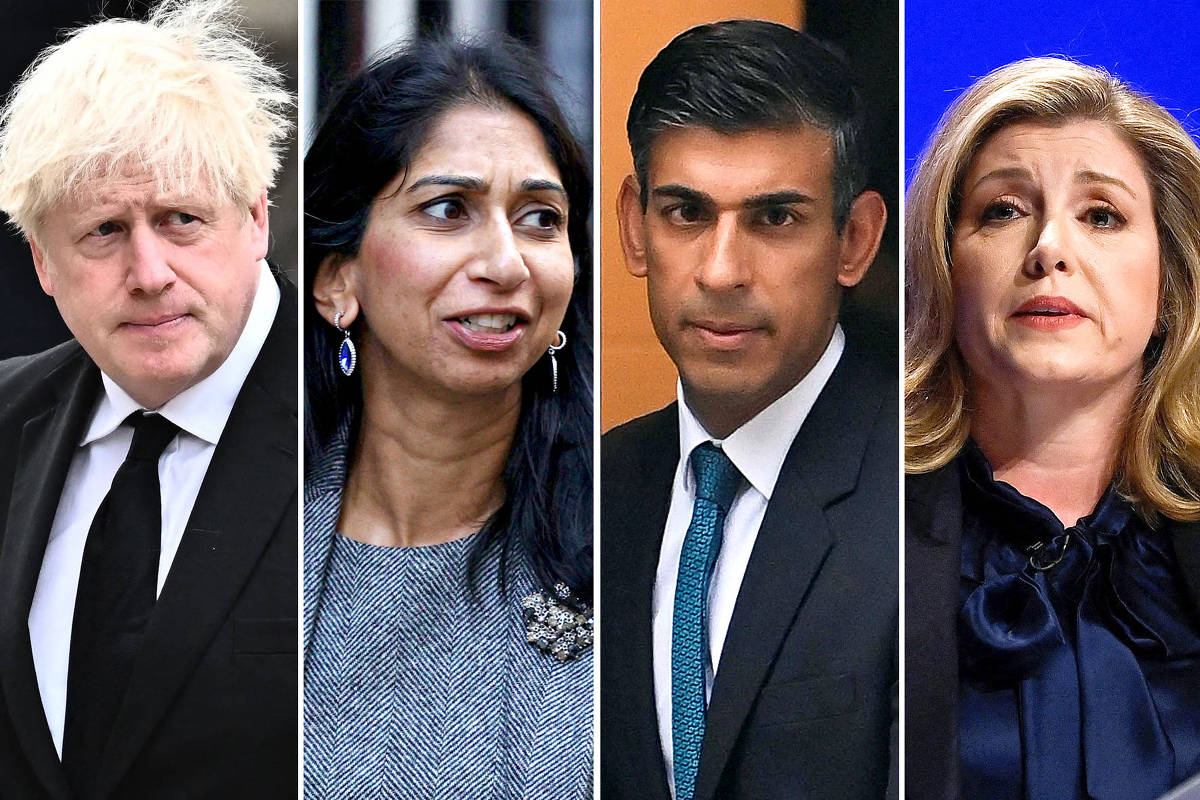 Even before Liz Truss announced her resignation on Thursday (20), the race for her seat had already started behind the scenes of her Conservative Party – a dispute that now moves specialized bookmakers too.

According to them, the current leader of the dispute is Rishi Sunak, who commanded the finance portfolio under Boris Johnson and had been defeated by Truss in the last indirect elections.

It is the second place in the contest, however, that draws the most attention —Boris in person, who, some say, could make a triumphant return to office after being defenestrated even by former allies three months ago.

Lastly, there is Penny Mordaunt, defense minister under Theresa May and popular with members of the legend. Other speculations also include Suella Braverman, head of Truss’ interior ministry whose departure from the government precipitated the prime minister’s downfall.

The only one to confirm his candidacy for now was Mordaunt. The Daily Mail tabloid claimed that the new scenario made Boris anticipate his return from a Caribbean vacation.

Candidates for leadership of the Conservative Party must submit their names to the 1922 Committee, the group that organizes the internal dispute, by next Monday (24). In order to be accepted, they need to receive the support of at least one hundred parliamentarians of the acronym, each of whom can only endorse one leader.

As the legend has 357 seats, only three names have a chance of advancing to the vote. In this case, the least voted of the trio is eliminated, and the remaining duo goes through another contest. In the following days, the decision passes to the approximately 200 thousand members of the party, who will be able to vote on the internet until the following Friday (28). It is then that the result will be announced.

There is, however, the possibility that only one candidate will reach the support of 100 parliamentarians. This will then be declared the new leader of the Conservatives and, consequently, new prime minister on Monday itself.

On Friday night (21), congressman Tobias Ellwood wrote on his Twitter account that he was the 100th Conservative to support Sunak, which would make the former finance minister the first candidate to actually enter the race. The Guardian newspaper accounts, however, do not guarantee that Sunak already has 100 nominations – the newspaper’s sum takes into account only the open votes of the Conservatives.

Discover below the main candidates to occupy the post of Prime Minister of the United Kingdom.

Apparently, it was not for nothing that the former British prime minister ended his farewell speech to Parliament with the phrase “hasta la vista, baby” — taken from the blockbuster “Terminator 2”. But Boris may struggle to get the 100 votes needed for his candidacy after three scandal-ridden years in power.

Today, his name seems to divide the Conservative Party. Some say he is unlikely to reach the endorsements goal, having alienated dozens of allies over the course of his tenure. Others argue that the leader may be the party’s best bet to calm the population and the market at a time of energy crisis and high cost of living, consequences of the Ukrainian War.

The second is the position of the current Defense Minister, Ben Wallace. It was speculated that the former soldier would test his chances in the election, having emerged intact from the recent turmoil in the acronym. But he, who spearheaded the country’s response to the Russian invasion of Ukraine, said he would prefer to remain at the head of his portfolio, saying he was concerned about public opinion given the rapid pace of successions in the country’s leadership.

Other ministers who declared support for Boris were Jacob Rees-Mogg, at the head of Business – who even launched a hashtag on Twitter, “#Borisorbust” (Boris or failure), to mark his position. And Simon Clarke, Secretary of Development, Housing and Communities.

The former financial analyst can say “I told you so” to the risks of his daring economic plan of tax cuts and new aid from his rival in the last election, Liz Truss – the proposal caused a shock like few in the market and, ultimately, led to the downfall of the prime minister.

Appointed finance minister at the time the coronavirus hit Europe in early 2020, he was praised for the package of measures he launched to combat the pandemic crisis.

But his name remains unpopular with some MPs for his role in the rebellion against Boris. His departure from the government was one of the first of a series of resignations that forced the then prime minister to step down.

Current government leader in the Legislature, she made a name for herself as Secretary of Defense under Theresa May in 2019, and even competed against Liz Truss and Rishi Sunak for leadership of the party in the last indirect elections.

His name has the advantage of not having been tarnished by scandals from previous administrations. But she doesn’t have ample experience either, and so far she hasn’t been able to outrun Boris and Sunak in the bookmakers.

Representative of the most right wing of the party, defending anti-immigration agendas, for example, Braverman resigned as head of the Interior portfolio the day before Truss’ fall.

Even so, his participation in the government of the former prime minister may have burned his credentials with the acronym, and his chances in the election seem limited according to experts.