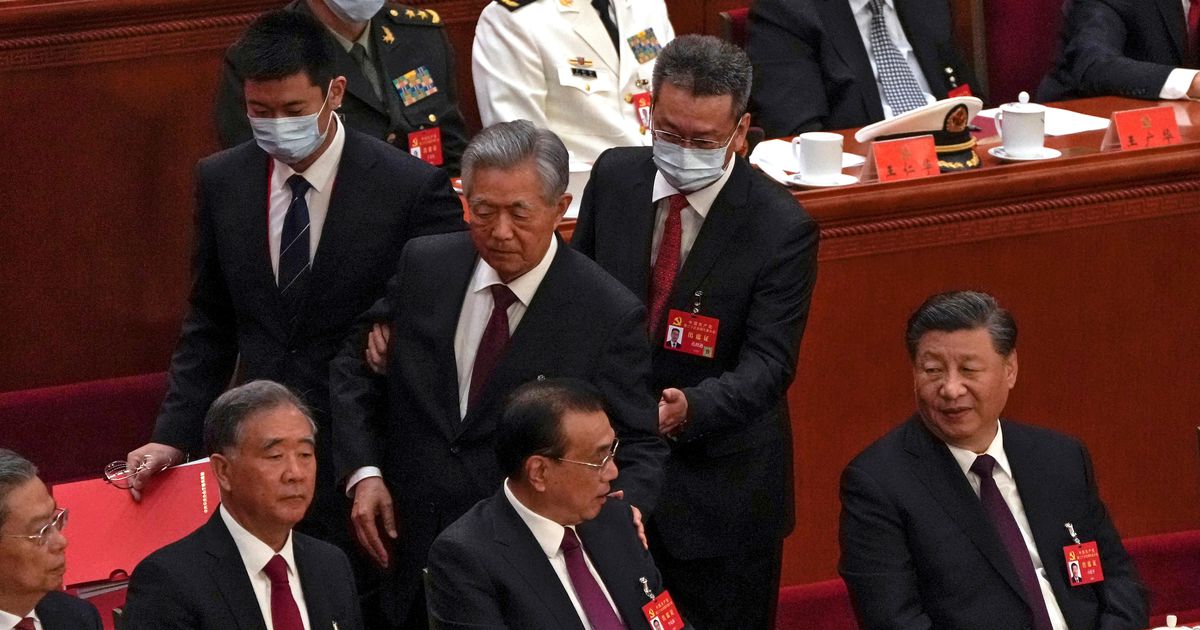 Hu Jintao, 79, former leader of China and predecessor of Xi Jinpingwas unexpectedly removed from the closing ceremony of the Communist Party Congressheld this Saturday, 22.

He was seated to the left of the Asian country’s current leader when he was led out of the main auditorium of the Great Hall of the People in Beijing by two security guards.

Video from the AFP news agency shows a security guard trying to lift Hu out of his chair, drawing the eyes of authorities around.

This is mindblowing. To do this so publicly knowing the whole world will see this.

It has to be CCDI taking Hu away.

Giving the impression of being stunned, Hu appears to resist as flight attendants escort him out. In the exit, he exchanged words with Xi and patted Prime Minister Li Keqiang on the shoulder, seated to Xi’s right.

Video of the incident, highly unusual given the meticulous stage management of most of these events, was widely shared on social media but could not be found on China’s heavily censored social media platforms.

State media coverage of the ceremony did not include the scene, which took place just as journalists were entering the hall.

The Communist Party Congress, which takes place every five years, ended on Saturday. Authorities did not provide an explanation for the incident or respond to inquiries from AFP.

Understand the Congress of the Communist Party of China

“Whether it was deliberate or not, whether it was because he wasn’t well, the effect is the same. Total humiliation for the last generation of leaders before Xi,” posted British analyst Alex White, who lived in China.

Wen-ti Sung, a senior professor at the Australian National University, told The Guardian newspaper that the behavior of other leaders seated in the front row made leaving seem “harmless”.

“From the video, it appears that Li Zhanshu, who was sitting next to Hu Jintao, tried to help Hu to his feet and even stood up briefly to see Hu leave, which is a common gesture of respect. So Li didn’t seem to find Hu politically toxic to respect,” he said.

Hu Jintao was escorted to Congress

Days ago, the same Hu Jintao had been escorted into the Congress of the Communist Party of China.

Videos of him being escorted to his chair appeared on social media in China but had little repercussion in the West.

The Communist Party has so far not provided any explanation for Hu’s strange withdrawal, and it could be weeks, months before the cause is known.

Xi Inping himself disappeared from public view for two weeks just before he became China’s top leader 10 years ago, an absence that has never been explained. / AFP and AP

Previous “It’s one of the reasons”; Goalkeeper does not shut up and reveals that Cássio ‘collaborated’ for his departure from Corinthians
Next Anniversary of Goiânia has a special cultural program; see the script