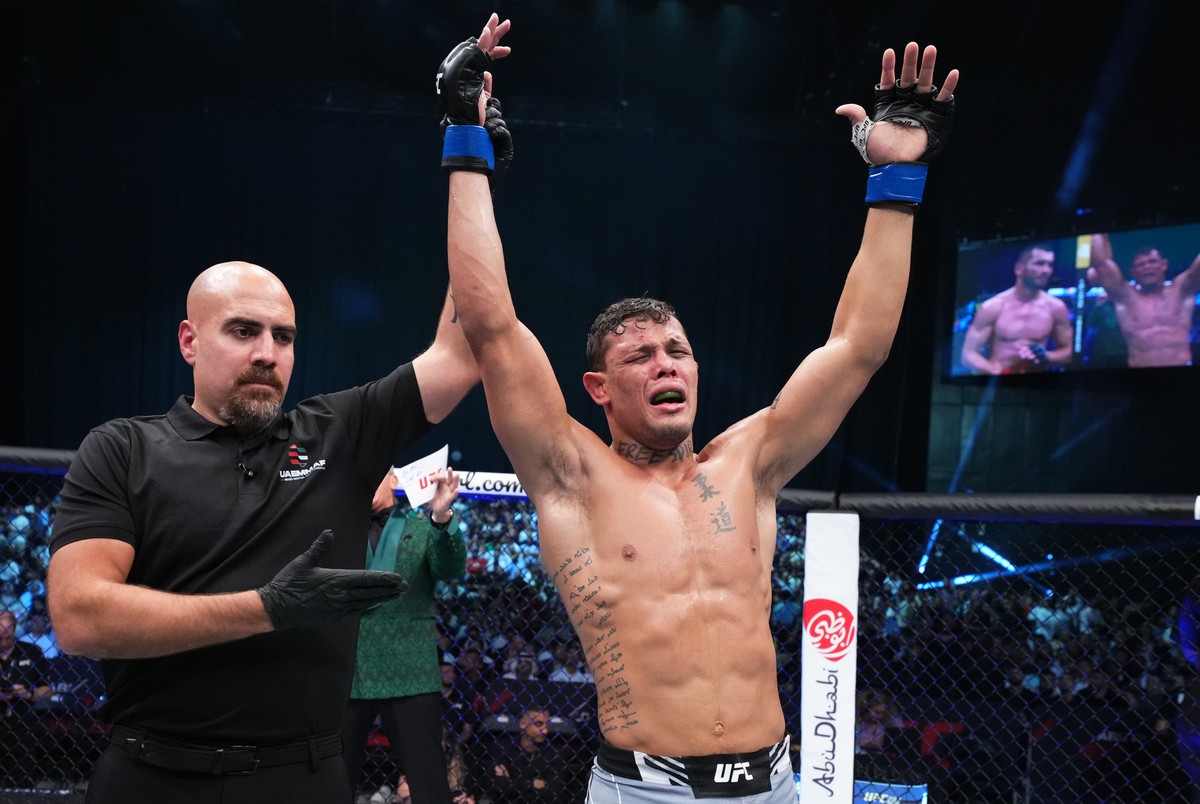 UFC 280 started positively for the Brazilian squad. This Saturday, in Abu Dhabi, middleweight Caio Borralho and bantamweight Karol Rosa won their fights on the event’s preliminary card. Both wins were by judges’ decision.

Caio Borralho is announced as the winner at UFC 280 — Photo: Chris Unger/Zuffa LLC

Undefeated in the UFC with two wins, Caio Borralho faced the tough Makhmud Muradov in the penultimate fight of the preliminary card. Borralho took the initiative in the fight from the first round, firing a few punches, until applying a good takedown and taking down his opponent. Muradov tried to escape the fight on the ground, but the Brazilian took advantage and reached the mount, dominating the dispute. The athlete from Uzbekistan reacted and escaped, staying on top until the end of the first round, although he was almost surprised with a good pedal shot by his opponent.

Muradov surprised by applying a takedown in the second round, but Borralho defended himself by attacking with a guillotine. He didn’t finish, but managed to reverse and mount. However, he again saw his opponent explode and get on top, as in the previous round, remaining in this position until the final seconds, when the Brazilian attacked the neck and escaped, seconds before the bell rang.

Muradov took the initiative in the third round and applied a takedown, but, as in the previous one, the Brazilian attacked with a guillotine, did not submit, but managed to reverse and stay on top. After getting the mount, Borralho stayed inside the opponent’s guard, where he started to work on ground and pound. The Brazilian managed the position until the end and took the victory in the unanimous decision of the judges (30-27, 30-27 and 29-28).

The event began with Brazil in action in the octagon. Willing to bounce back from a setback in her last fight, when she was defeated by Sara McMann, Karol Rosa faced Lina Lansberg in a bantamweight bout.

In the initial moments, after a brief study, the Brazilian was surprised with a right punch and fell to a knockdown, but quickly recovered and got up, where she continued to accept the striking. After that, Karol shortened it, managed to take it to the fences and take down, where he worked on top, in the half-guard, and stayed until the end of the first round.

Right at the beginning of the second round, Karol tried to put his opponent down again and stayed for more than two minutes throwing some punches and controlling the fight. The Brazilian got up and kicked her opponent, who remained on the ground, but connected a knee to the head with Lansberg on three supports, which is prohibited by the rules. She was penalized with the loss of one point. When combat resumed, Karol took him to the ground again, where he remained once more until the gong sounded.

The third and final round started with Lansberg a little more aggressive on his feet, thus preventing the Brazilian from attacking him with a takedown. After a few minutes of being tied to the bars, Karol broke free and landed good elbows on her opponent. The fight was for the judges and the Brazilian took the victory by majority decision (29-27, 29-27 and 28-28).

Other highlights from the preliminary card

In the main fight of the preliminary portion of the event, the American of Palestinian roots Belal Muhammad ran over the American Sean Brady and ended his opponent’s invincibility. Known for his grappling fight, the fifth-placed welterweight showed that he also has good striking and pressured Brady throughout the fight, until he got a standing TKO at 4:47 of the second round.

Belal Muhammad reached eight consecutive victories and took the opportunity to challenge Khamzat Chimaev, a great sensation in the category who was present at the event.

The preliminary card was one of confrontations without many emotions until the fifth fight of the schedule. That’s when light heavyweights Volkan Oezdemir and Nikita Krylov entered the Octagon determined to lift the crowd. The Swiss Oezdemir gave a blitz at the beginning and shook the opponent. Ukrainian Krylov appealed to clinched play to recover; once recovered, he hit bombs and nearly caught Oezdemir in a rear naked choke.

The rest of the fight wasn’t as mind-boggling as the first round, but it was pretty busy. There was no knockout or submission, but Krylov put a lot of pressure on the next two rounds and won by unanimous decision.

British-born Russian Muhammad Mokaev has had his toughest fight since his UFC debut in March. Despite the difficulties, he beat Canadian Malcolm Gordon with a surprising armbar submission at 4:26 of the third round.

Previous Marvel: Armor Wars, series linked to Iron Man, will become a movie with Don Cheadle
Next Anatel will apply a fine for abusive calls; understand