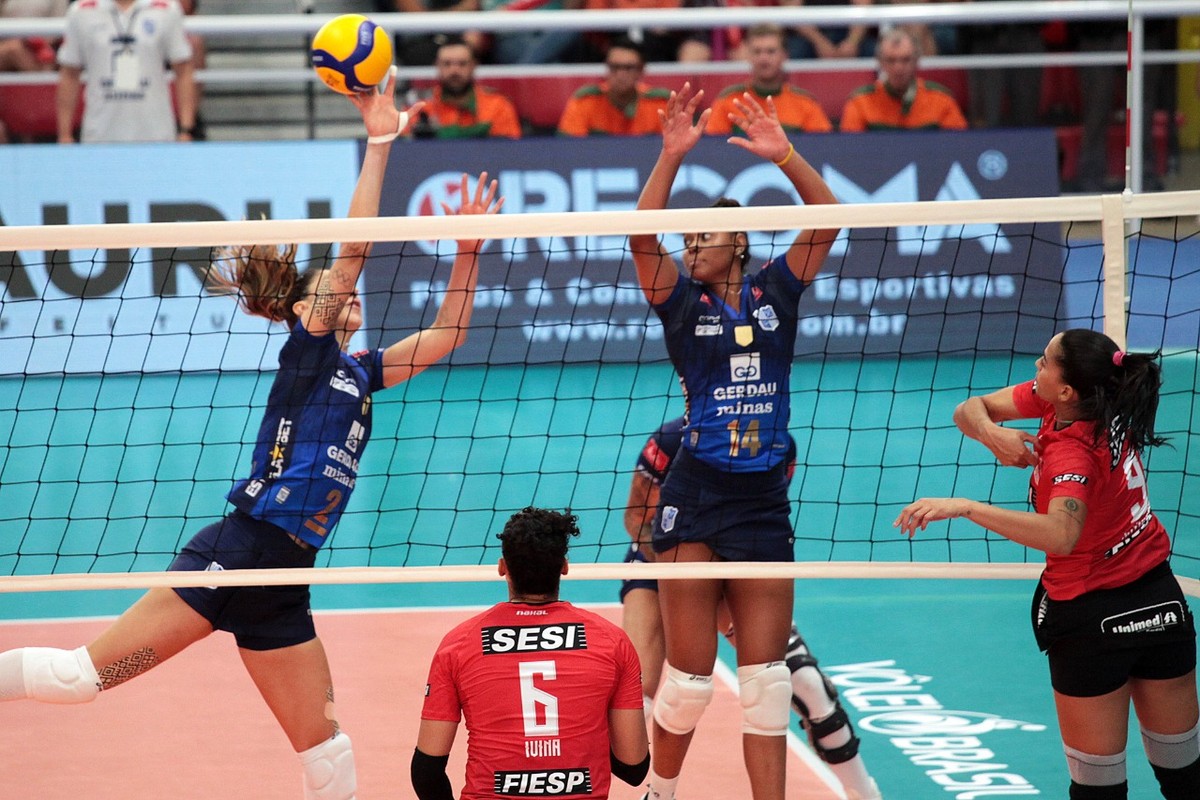 In the debut of the new gym, Sesi-Bauru wins Minas and wins the unprecedented title of the Volleyball Supercup | volleyball

The match marked the inauguration of the new gymnasium for the São Paulo team – which will host its women’s Superliga games on site – in official games. Who also made his (re)debut was coach Marcos Kwiek, for Sesi-Bauru. The coach was announced in June, but he only took over the team now after a season of games with the Dominican Republic national team.

See too:
+ Other news from ge.globo/tvtem

The teams qualified for the dispute for having won the main national competitions last season: Minas was the champion of the Superliga for the third consecutive year while Sesi-Bauru won the Copa Brasil, beating Minas in the decision.

This, by the way, is the second cup raised by Sesi-Bauru in a week: last Sunday, the team surpassed Pinheiros and won its second title in São Paulo.

For Minas, the defeat represents the fourth runner-up in the Supercup dispute, which reached its eighth edition and had only two champions until then: Rio de Janeiro and Praia Clube.

The two teams now turn their attention to the Superliga, which starts this week. The first to debut is Sesi-Bauru, on November 4, at 6:30 pm, against Osasco, at José LIberatti, and Osasco. The following day, it was Minas’ turn to debut against São Caetano, at Milton Feijão gymnasium, in São Caetano do Sul.

Infected by the energy of the crowd that filled the new gymnasium at its official opening, Sesi-Bauru started the match in high rotation and imposing itself, little by little building a good lead (which reached six points) to manage throughout the set. In the final stretch, however, what seemed under control quickly changed the scene: with four consecutive points of block, Minas tied the match at 21 to 21. From then on, the game was played point by point until the home team managed to close the set at 26 to 24, taking advantage of the opponent’s mistake.

Minas came back better for the second period and quickly established a front of five points, forcing Marcos Kwiek to ask for time to try to clean up the house. The pause led the São Paulo team to adjust the block and react, reducing the difference to just one point. With that, it was Nicola Negro’s turn to ask for time. The hosts turned around, but the visitors showed strength and resumed the front with an important block from Kisy. From then on, Minas didn’t lose the lead until closing the set at 25 to 19 in a new block, this time from Thaísa.

The third set was the most balanced start so far, but Sesi-Bauru managed to open four points by reaching nine, taking advantage of three consecutive attack errors from Minas. The continuous failures of the Minas Gerais team in the offensive sector, in fact, set the tone for the following minutes, allowing the São Paulo team to manage the advantage. Minas returned to touch, leaving the game even, but in the end the star of Dani Lins shone, who scored a series of consecutive blocks (reaching five in the match), helping the home team to close the partial in 25 to 23.

The point-to-point dispute marked the beginning of the fourth set. Sesi-Bauru managed to break away a little after turning into the double digits, opening five points ahead and leading the Minas coach to stop the game. The team reacted and cut the difference to two at 17 to 15, leaving the dispute to lead to the tie-break open.

In a great sequence, Minas tied the set at 20-20, making the partial even more exciting. In the end, however, the team from Bauru reached the match point on Karina’s serve and now had three opportunities to close the game. In the first, it didn’t work, but in the second, Mayhara confirmed the title and made the crowd happy.