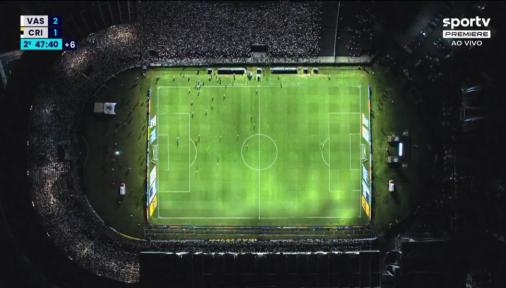 Commentator of Sportv channels, Carlos Eduardo Lino tore several compliments to Vasco fans present in São Januário today. The journalist hitched Cruzmaltino’s 2-1 comeback victory over Criciúma and the good record as home team this season, to the atmosphere created in the stadium.

– Football is crazy, man. Someone up there wants Vasco to come up. Because the crowd pushes Vasco, the team turns the mood inside the stadium, everything changes here (in São Januário) – said Lino, after Fábio Gomes’ goal.

After the broadcast drone showed images of the fans going crazy in the stadium, on account of the victory, Lino returned to praise the Vasco fans.

– Vasco’s fans, congratulations, you are managing to move up the team (…) Vasco’s fans win the game, friend – he added.

One of the decisive points for Vasco in this Series B was the home factor. Cruzmaltino won, in all, 42 of the 54 points played as home team, so far.

With today’s triumph, Vasco reached its twelfth victory as home team. The Hill Giant reached the second position of Serie B, with 59 points.

Previous Brendan Fraser was cast in The Whale for a movie shot in Brazil
Next ‘Wendell & Wild’: New animation from the director of ‘Coraline’ gets a release date!