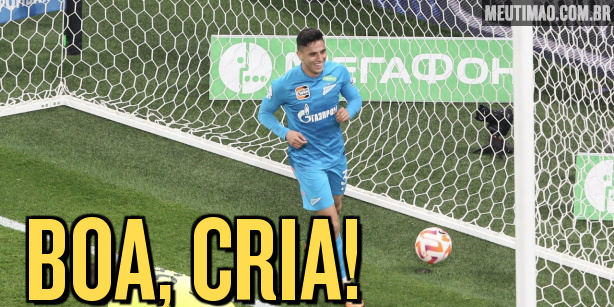 Forward on loan from Corinthians scores in Zenit’s rout in the Russian Championship; watch video

Striker Gustavo Mantuan, loaned by Corinthians to Zenit, from Russia, was able to celebrate a beautiful moment this Monday. The youngster contributed with one of his team’s seven goals in the 7-0 defeat of FC Sochi in the Russian Championship.

Mantuan started the match on the bench and was called to enter the field in the 13th minute of the second half, when Zenit was already winning by 5 to 0. After 18 minutes, shirt 31 took advantage of the ball hit by the opposing goalkeeper and completed to the open net to score your team’s ultimate goal – see in the video below.

The Zenit team also has a number of other players who have passed through Corinthians. One of them, forward Malcom scored two goals in this same match. Midfielder Claudinho was the starter and went blank while goalkeeper Ivan, who is still linked to Timão, did not leave the bench.

It was Mantuan’s third goal in 13 games with the Zenit shirt, which he has been defending since July this year, when he was involved by Corinthians in a negotiation for striker Yuri Alberto. At the time, in addition to the striker, Timão also ceded the goalkeeper Ivan, with all parties involved in one-year loans to the respective clubs.

See the bid in the video below

Previous “The Umbrella Academy” will end in Season 4. Know everything!
Next Find out WHEN WhatsApp will start CHARGING for using the app; check how it will happen