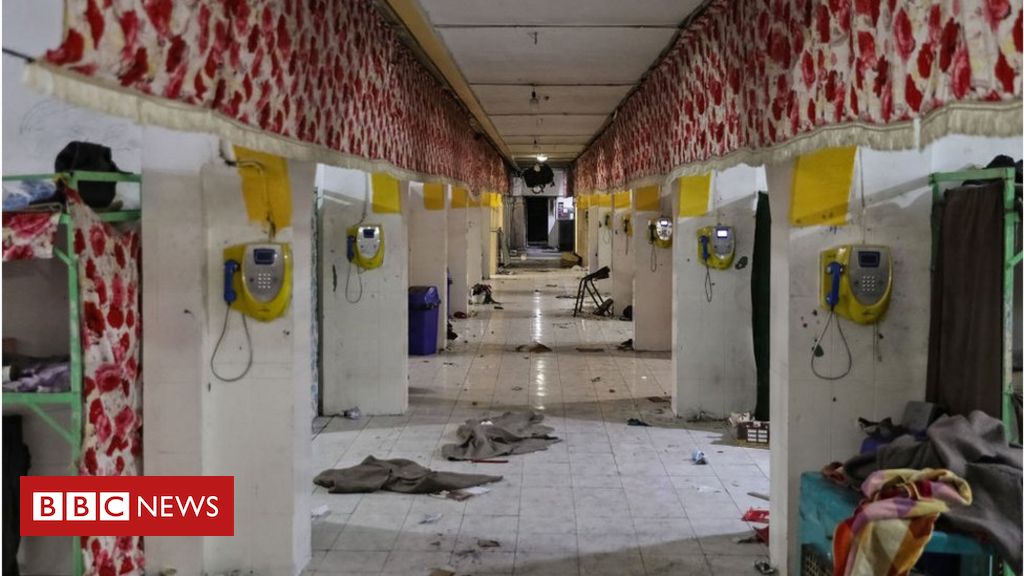 Inside Iran’s Evin Prison: ‘I Can’t Imagine What Inmates Are Going Through’

At least eight prisoners died and dozens were injured in the fire in Iran’s Evin prison on the night of October 15th. It is still unclear how the fire started and whether the prison incident is linked to the wave of protests in the country.

“We heard over 200 shots,” a witness inside the prison, known for housing political prisoners, told the BBC’s Persian service.

A video about the prison, posted on social media over the weekend, ended up going viral in the country. In it, you can see flames and smoke. Gunshots and explosions could also be heard.

“I’m worried that the source of the fire is still a big question mark,” says Ana Diamond, a former prisoner who spent more than 200 days in solitary confinement in Tehran’s notorious prison in 2016.

Ana Diamond, an Iranian-British, was just 21 years old when she was forced into a van by armed officers of the Revolutionary Guard of Iran and arrested in January 2016. She was accused of spying, which she denied.

“Evin is a maze,” says Diamond.

After being released on bail in August 2016, Ana was led by a guard out of the prison through its narrow corridors.

“And then, all of a sudden, a door opened and I was in Tehran. All it took was one door to put me right in the middle of the city,” Diamond recalls.

The prison was originally built on the outskirts of the Iranian capital, but as the city grew, the prison became part of Tehran’s bustling north.

Evin Prison was built in 1972 under the reign of Shah Mohammad Reza Pahlavi. Its initial purpose was to house over 300 inmates, but its prison population eventually expanded to 15,000 under the Islamic Republic of Iran.

In the 1980s, Evin Prison became known for its notoriety. According to reports by Amnesty International and accounts collected by the NGO Human Rights Watch, torture and death, executions, hangings, the disappearance of numerous political detainees and brutality were common practices there.

The prison was nicknamed “Evin University” due to the large number of intellectuals, student activists and journalists detained there.

Prison practices were criticized by human rights groups; the organization that manages Tehran’s prisons and its boss Sohrab Soleimani (brother of General Qasem Soleimani, killed by the US in 2020), were placed, in 2018, on the list of people and institutions that suffer sanctions imposed by the US government in 2018, for because of “serious human rights abuses”.

Ana Diamond says her body will never forget the cold she felt when she was trapped.

“Whenever I’m in a cold place today, I get my heart rate racing and I need to get out. Even though in my mind I’m calm, my body doesn’t like to feel that sensation.”

But the cold isn’t the worst thing she’s experienced in Evin.

“They were trying to humiliate me in ways that were very specific to my gender,” says Diamond.

Ana Diamond says she was also forced to take the so-called virginity test.

It is a test where the doctor inserts two fingers into the woman’s vagina to check that the hymen is intact. The test has no scientific basis.

“My initial penalty, when I was convicted of spying and when they suggested that I had used intimacy or seduction during my alleged spy work, was the death penalty,” explains Diamond.

She now believes this was “part of their long and elaborate piece of psychological torture”. And she says, “It was a way of humiliating me in very gender-specific ways.”

“It was just a mechanism to reduce my identity and experiences to what they would define as undignified and shameful, even criminal, and sow fear in me for what they might be able to do next,” Diamond says.

After spending months in solitary confinement, Ana Diamond was transferred to the public infirmary where she met other women who were political prisoners.

She remembers how crowded the infirmary was.

“If now hundreds of protesters were arrested and some taken to Evin, I suppose many of them would have to sleep on the floor.”

“I can’t imagine what the prisoners are going through right now,” says Diamond.

What happened on Saturday night?

The fire on the night of October 15 came after weeks of anti-government protests across Iran following the death of 22-year-old Mahsa Amini in police custody.

Hundreds of protesters were sent to Evin Prison.

“The prison was like a war zone,” says a source close to the family of one of the prisoners in the BBC’s Persian service, describing what happened inside the prison walls.

But there are conflicting accounts of the incident.

The country’s justice says the fire started in a prison workshop after a fight between inmates and, according to state media, was a “premeditated” escape plan, which the head of prisons in Tehran said was foiled by security forces. .

It’s hard to know what exactly happened that night.

But in an interview with the BBC’s Persian service, a prisoner denied the official version and said the tension began when some inmates protested against the transfer of their cellmates to another prison.

When prisoners from the other wings heard fighting and screaming, they stormed into the main courtyard. The guards responded with tear gas, the detainee added.

Then the tension escalated to other wings.

“The prisoners ran to the doors and knocked them down. The riot guards attacked and threw tear gas from everywhere. Many of us got sick.”

*With additional reporting by Farnoosh Amirshahi of the BBC Persian Service.

Device was detected in Costa Rica, Colombia and Venezuela after being seen in US airspace …