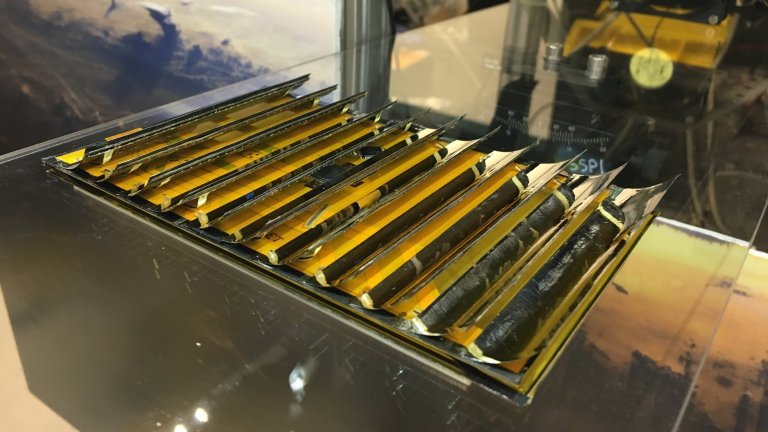 This is the solar “tile” that will be sent into space for the first test of the technology.
[Imagem: SSPP/Caltech]

Collecting solar energy in space and sending it to Earth is tempting because solar panels can face the Sun almost all the time, depending on their orbital position, and there are never any clouds to cover them.

The big challenge, however, is how to send the electricity to the ground, where it can be used.

A team from the California Institute of Technology has now announced that, after 10 years of working on their Space-Based Solar Energy Project (SSPP), they are ready to do a first real test.

“One of the first questions everyone asks is, ‘Why do you want to put photovoltaics in space? Well, in space, where you don’t have day and night and clouds and stuff like that, you get about eight times more energy. vision of this program will be able to deliver the power you need, where and when you need it,” said Professor Ali Hajimiri, one of the project’s leaders.

The idea is to collect sunlight, transform it into electricity, convert the direct current generated by photovoltaic panels into radio frequency, and finally transmit this energy wirelessly to the ground in the form of microwaves, the same ones used in telecommunications. .

The prototype that will be tested by the team is a small one, a 10 x 10 cm square weighing less than half a kilogram, which should be launched into space next December.

If the test is successful, the team advocates sending hundreds of thousands of these photovoltaic tiles into space, which would combine into a satellite system reminiscent of a flying carpet, creating a sunlight-gathering surface of nearly 10,000 square meters.

Although there are no risks in terms of ionizing radiation, microwaves generate heat that must be well directed so as not to interfere with satellites, aircraft and people.
[Imagem: SSPP/Caltech]

The construction of the small prototype that will go into space required project members to obtain significant innovations in three areas.

The first involved the construction of ultra-light, high-efficiency photovoltaic cells, optimized for space conditions and compatible with an integrated modular energy conversion and transmission system.

The second consisted of building ultra-thin and ultra-light collapsible structures that can be packaged to be sent into space and unfold after launch. This support must also contain the components necessary to convert, transmit and direct the radio frequency energy to the ground.

Finally, the team developed the lightweight, low-cost technology needed to convert direct current electricity into radiofrequency energy and send it to the ground in the form of microwaves. The researchers guarantee that the process is safe because it is non-ionizing radiation. As there are still precautions to be taken, the system can be shut down quickly in case of damage or malfunction.

“This concept was, in the past, truly science fiction. What made it possible for us to consider taking it from the realm of science fiction to the realm of reality was the combination of developments that are happening in photovoltaics, in structures and in wireless energy transfer. We realized that we can now pursue space solar energy in a way that is becoming practical and cost-effective,” concluded Hajimiri.