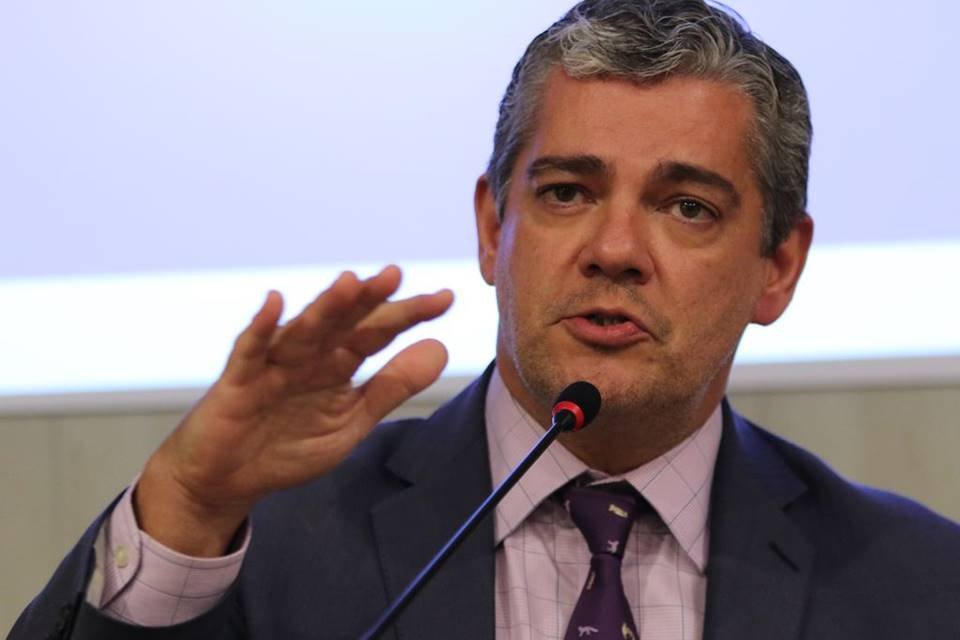 “We are doomed to success”, says the president of the Brics Bank

The curriculum of the diplomat, economist and political scientist from São Paulo Marcos Troyjo is so vast and qualified that it is even difficult to pinpoint what to put in the presentation of an interview. The 56-year-old is currently chairman of the New Development Bank, the NDB, which is based in Shanghai, China, and a member of the World Economic Forum’s Global Future Council. The first Brazilian to head a multilateral bank, before occupying the position for which he has a mandate until 2025, he was Brazil’s Special Secretary for Foreign Trade and International Affairs and director of the BricLab at Columbia University in New York. Recently, Troyjo was elected to the International Academy of Law and Economics, based in São Paulo. In this conversation with metropolises, he talks about what he considers to be the new chapter of globalization and how Brazil, given its position on the international trade board, is doomed to success. Here’s the interview:

You have said that we are witnessing a new chapter in globalization. Pandemic, the resulting recession and the war in Ukraine seem to put the globalization that started in the 1990s in check. What would this new chapter be?

Marcos Troyjo: I think we lived, from the end of the Soviet Union, in 1991, until the subprime crisis and the “Great Recession”, in 2008, a period that we can call “deep globalization”. The world was increasingly moving towards a global free market, with expanding representative democracies and countries coordinating into regional blocs that tended towards more, not less, integration. Since 2008, we are further away from those parameters. Industrial policies, not only in emerging countries, but even in Europe and the United States, became more restrictive and more focused on local production. There is, however, a very important structural phenomenon going on, despite all the uncertainty that surrounds the world. The main source of growth in the global economy in the next decade will be the expansion of emerging countries with large populations. This is what helps to open a new chapter of globalization.

Is “deglobalization” then a fallacy?

What are the main features of this redesign?

Troyjo: Perhaps the most striking is to consider that the world’s largest emerging economies — what I like to call E7 (China, India, Brazil, Indonesia, Russia, Mexico and Turkey) — will continue to grow their relative share of global GDP compared to with the G7 (USA, Japan, Germany, UK, France, Italy and Canada). The G7 has a Gross Domestic Product (GDP), in purchasing power parity, of US$ 49 trillion. E7, by the same criteria, has a combined GDP of US$ 60 trillion. It implies a reconfiguration of global value networks. This is a much broader phenomenon than just the one seen from the perspective of supplies. It creates changes in supply, in demand, in international liquidity stocks. To get an idea of ​​what this means, just look at the levels of trade between Brazil and China. 20 years ago, exchanges were $1 billion a year. Today, it’s $1 billion every 60 hours. In the next 10 years, China will import US$ 25 trillion from the world. As Brazil holds about 4% of Chinese purchases, if we just keep our market share, within a decade the country will be able to export the equivalent of US$ 1 trillion a year to China.

E7 greater than G7, new value networks, the ubiquity of technology and an era in which talent is the main factor of production make up the four main vectors of the new chapter of globalization.

How was the debate atmosphere at the IMF and World Bank meetings earlier this month in Washington?

Troyjo: A significant downturn is expected in the US and Europe, where the combination of high inflation, uncertainty and poor performance leads to a potential recession, which some call “global”. Some economists relate the current situation to the stagflation of the 1970s/1980s. The slowdown in the US and Europe will take some time to correct, given the large expansion of the fiscal and monetary base. Interest rates will rise and this will have a restraining effect on economic activity. Paradoxically, the level of unemployment, especially in the US, remains relatively low, which demonstrates the peculiarities of this post-Covid world. Still, robust growth is projected in some of the key emerging markets. Probably, 2023 will be another year in which the E7 will continue to increase its relative share of the world GDP, compared to the G7.

The IMF forecast for the Brazilian economy predicted a drop of 10%, but it was only 4%. It even looks like a Brazilian electoral research company. Why was there such a mistake?

Troyjo: I believe that this strength of emerging countries — and the resilience of the largest among them — may not yet have been captured by some of the projection models used by more traditional institutions such as the IMF. When, in 2020, the Fund estimated a drop of almost 10% in Brazilian GDP, part of this forecast took into account a contraction in Asian demand. None of that happened: exports to the region’s major emerging markets, especially food, remained strong. Hence the disparate calculations.

The topic of food security was much discussed at the meetings in Washington.

Troyjo: The topic of food security was everywhere. Once again, the main growth engine of the world economy in the coming decades will be the expansion of emerging countries with large populations. Thus, the food security-world economy relationship goes far beyond changing supply networks, inflation, logistical problems or the conflict in Ukraine. It’s a structural shift in the world’s food demand map. And there are several opportunities on different boards for Brazil.

What are the boards that can benefit Brazil?

Troyjo: By 2030, India is expected to overtake China as the world’s most populous country. Brazil has everything it takes to establish a great relationship with India in the field of food production and consumption. Another board is the Mercosur-European Union agreement, which covers 720 million people — 270 million in Mercosur and 450 million in Europe. In the current context of food security and inflation, it should be implemented quickly. Finally, Brazil and the US are the two biggest food producers in the West. They do not have a commercial agreement with each other. It is necessary to overcome specific issues, such as ethanol, sugar and meat quotas, and work in cooperation and innovation, to feed the world. As Brazil is an indispensable player in food production, partnerships for investments in Brazilian infrastructure — irrigation, storage, railways, ports — are fundamental for the planet’s food security.

There is talk about an alleged international isolation of Brazil in the last three years. Do you agree with this view?

Troyjo: There are more or less objective ways of analyzing this question. One of them is to see things from the perspective of trade and investment, something very tangible. Now, in 2021, Brazil was the 4th largest destination for foreign direct investment (FDI), according to the Organization for Economic Cooperation and Development (OECD). When comparing the flow of investments as a proportion of GDP, Brazil was the main destination that year, considered the 15 largest economies by the World Bank ranking. This year, the OECD formalized the process for Brazil to join the organization. When this process ends, Brazil will be the only country to join the G20, BRICS and OECD. Another thing: from 2019 until now, Brazil has concluded 15 international trade agreements. The Mercosur-European Union agreement, for example, is the largest between economic blocks of history. I would say that we are doomed to succeed in commercial relations with other countries.

There is resistance on the part of certain European countries to carry out this agreement. Protectionism uses environmentalism as a pretext.

Yes, but I believe it will be overcome. The numbers will end up imposing themselves, without prejudice to the environmental agenda. From 2018 to 2021, Brazil was the G20 economy that most increased the share of foreign trade (exports plus imports) as a percentage of GDP. Last year, Brazilian foreign trade reached 39% of GDP, the highest level in the historical series started by the World Bank in 1960. I was just looking at the numbers for 2022. In comparison with January-September 2021, of the 20 main export destinations in Brazil, there was an increase in transactions to 19, of which 17 had double-digit growth. In 2022, the trade flow should reach US$ 600 billion. These are impressive numbers.

How has the New Development Bank (NDB), known as the Brics Bank, presided over by you, been fulfilling its role of fostering development in the countries that created it in 2014? How much has already been invested in total and which type of project does the bank prefer?

Troyjo: Since the beginning of its activities in 2015, the NDB has already approved around US$ 31 billion in investments. The bank’s mandate is for infrastructure and sustainable development—areas where there is much to invest in the world. Since I started work on the NDB in 2020, we have placed an important focus on institutional improvement. We reformulated the bank’s organizational structure, establishing an area entirely dedicated to ESG (Environmental, Social and Governance). We also created a division with an emphasis on expanding operations with the private sector. We also improved the geographical distribution of project approvals. As of 2019, Brazil only had around US$600 million in approved projects. Now, the portfolio for the country is approaching US$ 6 billion.

How are the NDB projects in Brazil?

Troyjo: The NDB is present in several infrastructure sectors. States, municipalities, private companies, regional banks: all are potential partners of the NDB. We integrated the financing of the largest solar energy complex in Latin America, in Minas Gerais. We support logistics projects in Pará. There are urban mobility projects in Paraná and São Paulo. We finance wind farms in Pernambuco, Piauí and Bahia. We established a partnership with Banco do Brasil for irrigation, solar energy and sustainable storage. These are key areas for the expansion of infrastructure in the country.

In addition to Brazil, Russia, India, China and South Africa, the original BRICS, the multilateral bank also admitted new members. Why did the NDB expand this range? Is it planned to include more nations in the bank?

Troyjo: The essence of the NDB, as well as its strategy, is to become a reference institution for multilateral financing of emerging economies. We started the bank’s corporate expansion with the admission of new members, such as the United Arab Emirates, Bangladesh, Egypt and Uruguay. We will continue this process in a gradual and regionally balanced manner.