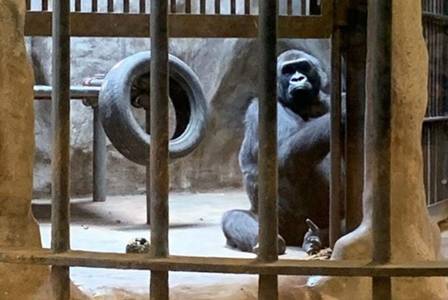 Bua Noi is the Thailand’s last captive gorilla. there are already more than 30 years without freedomkept in a fence small zoo in department store at Pata shopping mall in Bangkok. The gorilla was purchased before a national law against the trade in endangered animals.

Known as “the saddest gorilla in the world”, Bua Noi (which means small lotus in Thai) has never left the enclosure in which it is kept, 10 meters by 20 meters. Her too never lived with other gorillas.

Efforts to free the gorilla and close the mall’s zoo escalated in 2015 as its story took the world by storm and animal rights groups called for its release. However, every attempt over the years to free the lone gorilla has been rejected.

In recent months, Thailand’s Ministry of Natural Resources and Environment began negotiating with Pata the sale of the animaloffering for him approx. BRL 4.2 million. A fundraising campaign was launched.

However, last week, Pata cooled down the latest attempt to free Bua Noi, stating that the gorilla is not for saletold the “Bangkok Post”.

The store’s management published a note stating that Bua Noi is too old to adapt to a new environment after spending a lifetime in her enclosure..

While there were plans to transfer her back to Germany, where she was born, and put her in a sanctuary with other gorillas, the mall’s zoo management said would not part with her ‘dear animal’ and argued that Bua Noi is not ‘a prisoner’.

Gorillas usually live to be around 40 years old, so having spent over 30 years in a zoo in Thailand, there is not much time left for Bua Noi to enjoy any possible freedom he can gain.