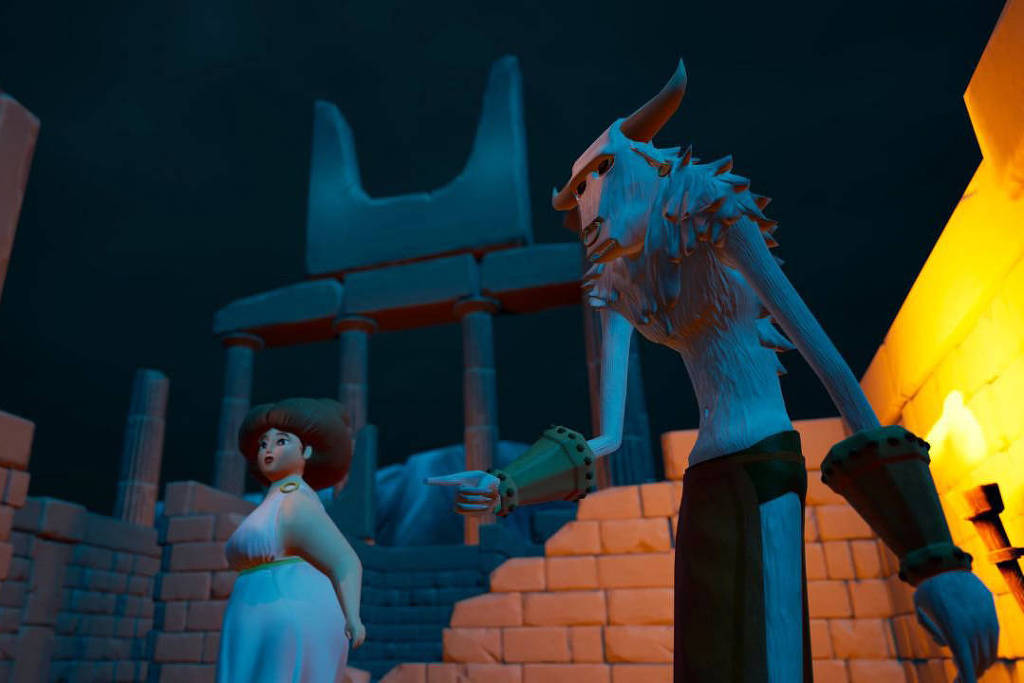 Wearing virtual reality goggles, headphones and holding two controllers, the audience enters the Cretan labyrinth. Who guides the visitor is Cora, a girl in a white dress voiced by actress Alice Braga.

Inside this digital world, we walk through the tangle of stone walls, gates and columns, under a cloudy sky. To find the exit, you have to walk back and forth and press the buttons on the controls. When passing close to a cliff, you can even feel butterflies in your stomach.

This is the plot of “Lavrynthos”, a short film in virtual reality that is part of the schedule of the São Paulo International Film Festival. The labyrinth, of course, exists only virtually — the scene to the outside looking in is of some people roaming around in space using virtual reality devices.

The film festival shows a total of eight productions with this technology, which last from 8 to 28 minutes. Each one has a different plot, and part of them allows audience interaction. In common with all, it is possible to look in all directions, in a 360º turn, and see yourself immersed in history.

In “Gravidade”, also produced by São Paulo native Amir Admoni and Peruvian Fabito Rychter, the audience follows two brothers who live tied together in a world without gravity and in black and white. With the help of the controls, it is possible to interact with the characters’ world and play with objects such as boxes, tires and chairs.

In Benjamin Steiger Levine’s short “Marco and Polo Take a Turn”, the cinephile is placed inside the house of a couple who start an argument. In the colorful “The Miracle Basket”, it is possible to play with butterflies and plant seeds in a landscape of trees, plants and animals.

Other stories are more contemplative. In Carolin Wedler’s “Garden of Delights”, visitors walk through a 3D reconstruction of the eponymous canvas by Dutch painter Hieronymus Bosch. There is also one that takes place in a war, one in waterfalls in Italy, an animation about the transformations in the planet and another about dreams.

The national productions are narrated in Portuguese, but those that come from other countries are mostly spoken in English, with no dubbed or subtitled option.

This is the second year that the show has exhibited productions with this technology, after a break in the last two editions caused by the Covid-19 pandemic.

The next exhibitions will take place from this Wednesday, the 26th, until the end of the event, on November 2, at Sesc 24 de Maio, in the city center — except on Sunday (30). There is also a session at CEU Vila Atlântica, in the north zone, on Monday, the 31st. All are free and take place from 3:30 pm to 8:30 pm.

Meanwhile, the show continues with a program of 223 films, shown in movie theaters. Tickets are paid, with prices starting at R$24. In parallel with the in-person sessions, some films are shown on the internet, on the Sesc Digital and Spcine Play platforms. In addition, free sessions are scheduled.

Previous Discover the most visited websites around the world, according to research
Next Reporter escapes live robbery in front of the Libertadores final stadium; watch video