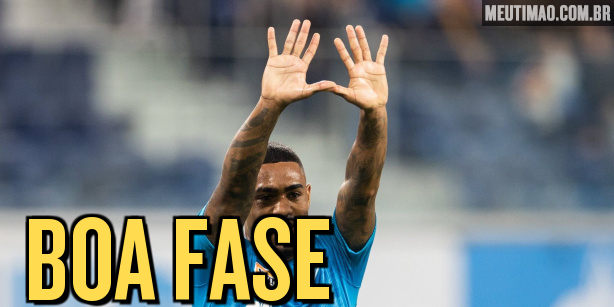 The European season has been well used by Malcom, ex-Corinthians, who defends Zenit, from Russia. The player has been adding good individual numbers and has become the Brazilian with the most participations in goals considering only the 2022/2023 national championships.

According to a survey carried out by the Sofascore Brazil, in 14 matches played in the Russian Premier League, Malcom has 11 goals and five assists. With that, the player needs 75 minutes to participate in a goal, has 36 decisive passes, in addition to having finished 45 times and hit the goal in 23 opportunities – see full numbers below.

In his last performance, which took place on Monday, Malcolm scored twice. Zenit hosted FK Sochi for the fourteenth round of the Russian Championship and scored 7-0. On the occasion, Gustavo Mantuan, another ex-Corinthians, also left his mark on the Russian League leader’s rout.

Recently, the My Helm carried out a survey where Malcom was the second Brazilian player with the most participations in goals in all of Europe. The 25-year-old athlete was second only to Neymar and appeared in front of big names like Vinícius Júnior and Gabriel Jesus.

Malcom is one of Zenit’s biggest stars. The player arrived at the Russian club in 2019, after spending time at Barcelona, ​​and since then he has won seven trophies for the Russian team. The athlete had his contract renewed this season until 2027. In the Russian team, other ex-Corinthians are part of the cast, they are: Ivan, Gustavo Mantuan and Claudinho.

For Timão, Malcom did his entire youth division at Parque São Jorge and was always treated as a promise within the club. He joined the main squad in 2014 and the following year he was a key player in winning the sixth Brazilian championship. In 2016 he left Timão, starting his journey in Europe, when he was transferred to Bordeaux, France.

🔎 Malcom (25 years old) is the Brazilian with the most goals and participation in goals considering European national leagues in 22/23. 🇺🇸🔥