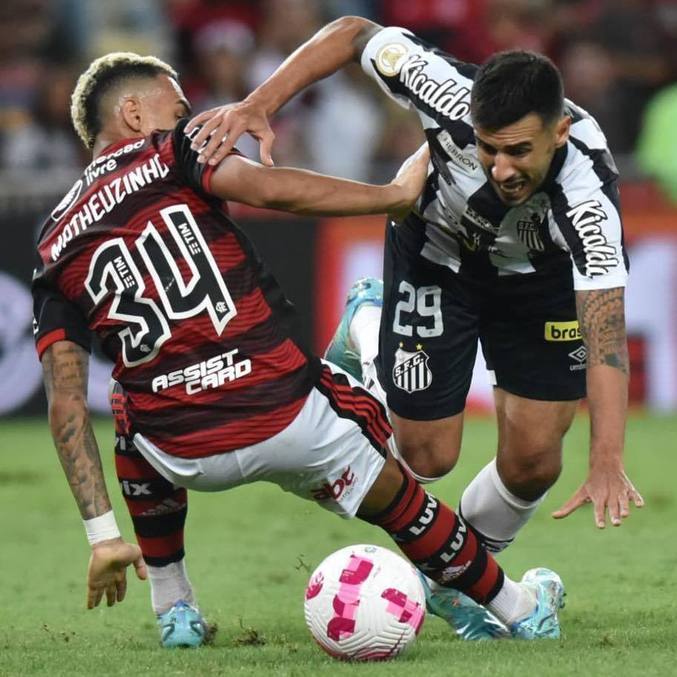 Judges angry with the public removal of referees who missed an absurd penalty, in the game Flamengo and Santos – Prisma


Referee: “He makes the cut and he’s falling. And the other one is standing in front of him”
VAR: “I don’t see it as a penalty here, right? The leg is already stopped. The foot stops to the side and he trips over the foot. He doesn’t get to hit, right?”
AVAR: “Is this contact without any impact, Adriano?”
VAR: “No impact whatsoever”
AVAR: “Perfect”
AVAR: “That’s right. A camera. Watch this impact, Adriano”
VAR: “I don’t see any impact here. The leg is already stopped. There’s a contact there. It comes back a little bit. That knee to knee there”
AVAR: “And André is on top of the play too, you can see. Watch André watching the play well”
VAR: “The leg is already there. As he turns this way, he’s going to bump into the defender. For me, normal throw.”

Thus began the biggest nightmare for Brazilian refereeing, since VAR arrived in the country in 2018.

The bid brought together everything it could not.

In yesterday’s match, at Maracanã, Matheuzinho, from Flamengo, took down Camacho, from Santos, in a clear and incontestable way. Clear penalty.

Judge André Luiz Freitas Castro was eight meters from the play, facing the pitch. But he didn’t have the security to mark the penalty and passed the responsibility to Adriano Milczvski, responsible for video refereeing.

The error was already very serious.

But for the duo’s astral hell to be complete, the worst that could happen, happened. In the same move, Flamengo went down in speed and Pedro scored a humiliating goal against Santos.

The match ended 3-1 for the red-black.

And with widespread revolt from the players, the Technical Commission and, mainly, the Santos administration. The club, with the defeat to the mixed team of Flamengo, stalled in 12th place. Getting further from the dream of disputing the pre-Libertadores, which should be reserved for the top eight in the Brazilian.

President Andrés Rueda banned everyone from being interviewed at the Maracanã as a protest.

And he even released a note mocking the situation.

“Why does the CBF have VAR?

“This refereeing is shameful and increasingly harms Brazilian football. You must exclude this VAR referee and the field referee. We demand that these gentlemen never play in our games again.

“Not even a VAR query has been made. We understand that this has gone from a common mistake to a disastrous action.

“What they did today was criminal.

“In the last two games we sent error letters and we didn’t even receive a response. On the contrary, we were harmed again.

“In several matches, biased referees. Should we think it’s something directed?

“Why does Mr Seneme lie that they invest in training, if these referees don’t have the least preparation?

“What else needs to happen?

“Santos will no longer tolerate this recurring lack of professionalism from an entity that has clubs as a priority.

“We want the referee’s conversation with the VAR to be made public immediately. Enough of ‘mistakes’ that, being so gross, lead us to think they are not simply mistakes.”

But, in an unprecedented way, right after the game, he suspended the two referees involved in the capital mistake of the game.

“The CBF Arbitration Commission decided to suspend indefinitely the Referees André Luiz de Freitas Castro and the Video Referee (VAR) Adriano Milczvski for understanding that their performance, in the match between the Flamengo x Santos teams, valid for the 34th round of the Series A 2022, was below the required standards. Said officials will be included in the Refereeing Performance Assistance Program.”

The decision was firm, fair, but without the slightest need to be public.

The referees, in addition to knowing that they were wrong, were humiliated.

The decision could take place internally.

The situation occurs when Brazilian referees decided to create the National Federation of Referees, in Recife.

The unions of Ceará, Paraná, Rio de Janeiro, Rio Grande do Sul and São Paulo are behind the movement. Lawyer Gislaine Nunes, who participated in the creation of the Pelé Law, gives legal shelter to the arbitrators.

“A historic moment for us, who have waited 25 years for this. In a moment of chaos, order was reestablished. The Federation comes to fight equally with the CBF. The only difference is the budget. We are using all possible strategies. so that the Brazilian referee will be valued. Now with a detail: a legitimate representation within the judicial field, with all possible weapons. Brazilians.

“The entities are to be congratulated. Of 27 states, we are here with 24. This shows the union, it shows that everything we have done so far has credibility. to free the Brazilian referee from this slavery that has lasted for so long in the hands of the CBF and the federations”, said the president of the National Association of Referees, Salmo Valentim.

The meeting for the creation of the Federation of Referees took place in August.

And they promise not to back down.

What happened yesterday was very poorly received by the more experienced judges.

They have realized that they are increasingly under pressure.

They are not professional.

There is no interest on the part of the CBF, due to labor issues, such as retirement.

The situation is very complicated.

A tougher stance, such as a referee strike, is not ruled out.

There is a lot of anger over what happened to André Luiz Freitas Castro and Adriano Milczvski.

With the humiliation in the public square…

Previous Hugh Jackman reveals why he agreed to play Wolverine again
Next Python 3.11 is up to 60% faster and brings clearer error messages – Tecnoblog