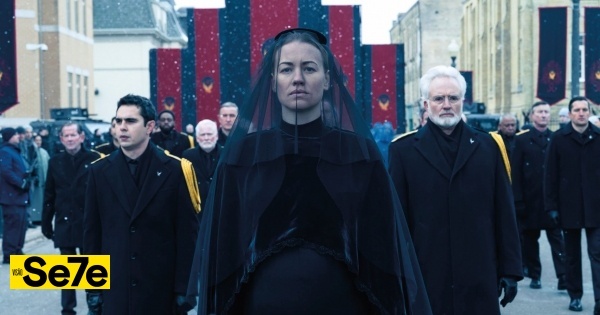 the fourth season of The Handmaid’s Tale ends in a scary way (and what’s not scary about this series?). The women who escaped Gilead to Canada, including the protagonist, June Osborne, do not want to take the path of healing and reconciliation with their past, towards a normal and peaceful life. They want revenge, obviously. They are too destroyed to embark on the wonderful world of overcoming. Well, not all of them, but many and, well instigated by a natural leader, June (Elisabeth Moss), sharpen their claws. Commander Fred Waterford (Joseph Fiennes) is the perfect prey – in the middle of the forest, at night, a group of women goes after him. “Run (runs away),” says June. And she begins the hunt. The photographs that publicize the premiere of the fifth season (this Monday, 10, on TVCine), these do seem like a spoiler: seeing Serena (Yvonne Strahovski) covered in mourning, in Gilead, immediately suggests the success of the hunter. As if those women responded in an animal way to the bestiality of what they experienced. Who can judge them? But will there be any humanity left?

Putting ourselves in June’s shoes, it’s impossible to get on with life when her daughter Hannah remains in Gilead. (For those who don’t know the plot, this is a country born in the USA, from a revolution of the ultra-religious who, in order to face the low fertility rate, due to environmental destruction, force women to return “to their origins”. ”: some in the kitchen (the maids), others in the living room (the wives) and the third group in bed (the “handmaids”, fertile women transformed into sex slaves and birth attendants). , to this dystopian place, created by Margaret Atwood, land of nightmares that don’t even cross our minds.

The Canadian author herself, upon seeing the first season (the one that adapts the book, since from there everything is created anew), said that she found the scenes “horribly disturbing”. Now that the fifth season has premiered, a sixth has already been announced, which will be the last. And, from the sample we took a look at this Thursday, we’ll all be hooked to the small screen again, as the script remains brilliant (good luck to creator Bruce Miller) and the direction better than ever (Elisabeth Moss signs some episodes). Let’s take a deep breath and take the punches in the stomach.

Cult series: With 15 Emmys and two Golden Globes under their belt, The Handmaid’s Tale It’s one of the best series on television. On TVCine+’s video service, previous seasons can be viewed.