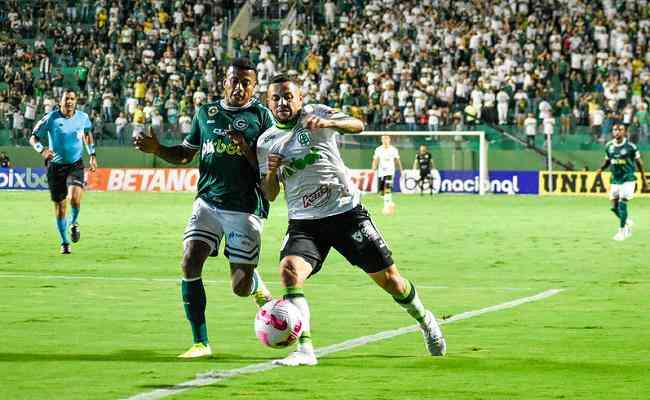 America came close to winning, but conceded a goal at the end and drew 2-2 with Gois this Wednesday (26/10) at Estdio da Serrinha, in Goinia, for the 34th round of the Brazilian Championship. With the result, Coelho lost the opportunity to enter the G8 of the competition, but is still alive in the fight for a spot in the 2023 Copa Libertadores.

From a penalty, Alosio opened the scoring for the visitors, but the hosts equalized the score soon after, with Vincius. Wellington Paulista put America in front at 43″ of the second half, and Diego scored the goal of the emeraldino tie already in the added time, at 49′.

The Minas Gerais team momentarily dropped to 10th position, with 46 points. On the other hand, this was the third match in a row for Coelho without a win in the competition.

América will only return to the field next week, on Wednesday (2/11), at 4 pm, when they host Internacional at Independência, in Belo Horizonte. Gois will visit Athletico-PR on the same day and time, at Arena da Baixada, in Curitiba. Both games will be valid for the 35th round of Serie A.

The first 10 minutes of the match were ‘study’ for both sides. With more possession of the ball, America couldn’t produce offensively, but also didn’t give up spaces in defence.

The first big chance went to Coelho. In a well-crafted ball from right to left, Everaldo rolled to Juninho, who finished at the entrance of the area to a great defense by Tadeu. In the sequence, Cceres risked from afar, and the ball passed the emerald goal.

On the counterattack, another arrival of the Minas Gerais team. Matheusinho received a throw from Cceres, cut to the middle and finished well in the corner. Tadeu, once again, made an excellent intervention and prevented the American goal.

At 35′, Mancini was forced to remove Everaldo, who left with pain in his right foot, to replace Alosio. The change had a direct impact on the team’s style of play, as the holder played well and printed speed on the right wing.

After the ‘lukewarm’ start, America dominated the match for most of the first half, but saw their rivals balance their actions in the final minutes. Gois’ only chance was in a cross, with Pedro Ral heading over Cavichioli’s goal.

As in the first half, Gois started the second half with very low scoring lines. Thus, America continued in command of the game and hit the crossbar in the 7′, with Mastriani, with a header.

At 9′, referee Wagner do Nascimento Magalhes awarded a penalty to Coelho after the ball hit Caetano’s hand, in full-back charged by Cceres. VAR asked the owner of the whistle to check the play on the television, but the field decision was upheld. Alosio charged hard from the left corner and opened the scoring: 1 to 0 for visitors.

American joy was short-lived. In the shot after the goal, Diego launched Vinicius on the right wing. The attacker cut to the middle and finished from the left, low, and tied the game for Gois: 1 to 1.

After the goals, Gois improved in the match, but both teams offered little danger in the attack. Despite that, Coelho rocked the net in the final minutes.

A few minutes after entering the field, Wellington Paulista received a good cross from Juninho and finished left-handed to put Amrica in front: 2 to 1.

In additions, Gois pressed and reached the goal of the tie with Diego. After confusion in the large area, the steering wheel finished beautifully and swelled the net: 2 to 2.

Reason: 34th round of the Brazilian Championship

Previous Selena Gomez opens up about her bipolar diagnosis: “I was terrified”
Next NVIDIA Notifies Partner AICs of RTX 4090 GPUs with Burnt Connectors for Evaluation