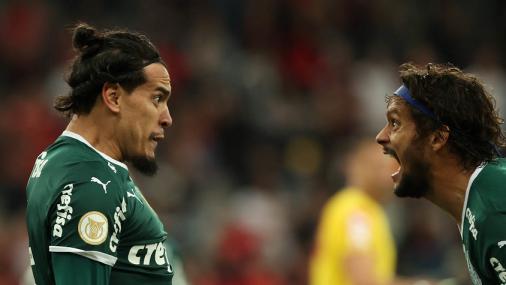 Palmeiras ‘eliminates’ rival, but title is for next time; know what it takes to be champion

Only one goal was needed for Palmeiras to be champion of the Brasileirão this Wednesday. However, the confirmation of the title was for the next, since Internacional ended up winning their match and postponed the conquest of Palmeiras. At the same time, Corinthians lost and ended any chance of fighting for the championship.

In this way, Inter became Verdão’s only competitor for the Brazilian title. With the comeback victory over Ceará, 2-1, Mano Menezes’ team went to 64 points and maintained the ten-point advantage over the leader of the competition. As there are still 12 points up for grabs, the Gauchos still have chances to be champions.

For Palmeiras, it is enough to win one of the next four matches that remain in the Brasileirão: Fortaleza (home), Cuiabá (away), América-MG (home) and Internacional (away). Reaching 77 points, Alviverde could no longer be reached, as Inter could have a maximum of 76 points if they win all four games they lack.

But Verdão could be champion even without beating Fortaleza. This, however, would depend on Internacional failing against América-MG, away. In this scenario, Colorado would reach a maximum of 74 points, while Palmeiras would have 75, if they draw, or 74, if they lose. By the number of victories, Alviverde would take advantage (21 x 20).

Although it was one goal away from Ceará to be champion this Wednesday, Verdão was able to celebrate the “elimination” of Corinthians, which lost 2-0 to Fluminense, at Neo Química Arena, and was left with 57 points. With 15 remaining in dispute for Timão, it would reach just 72 points, two less than what Palmeiras already has. Thus, there are no more chances of a title for Corinthians.

Scenarios for Palmeiras to be champion:

Previous The Umbrella Academy Season 4 Won’t Arrive in September 2022
Next ‘I tried to stay calm, but I was afraid’, says reporter approached by thieves in front of stadium in Guayaquil