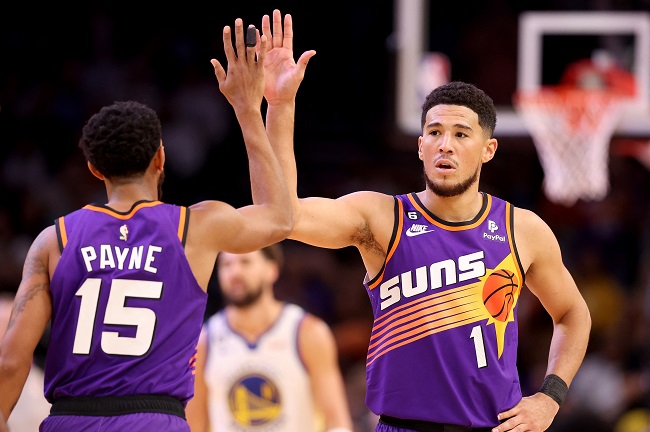 The Phoenix Suns knew how to take advantage of Klay Thompson’s expulsion to overwhelm the Golden State Warriors, 134-105, in Arizona. The home team had the greatest performance of Devin Booker, who commanded the triumph this Tuesday (26), with 34 points and seven assists. In addition, he was the protagonist of the argument that resulted in the first ejection of shirt 11’s career.

That’s because, the Warriors and Suns stars exchanged barbs, both received a technical foul, but Klay Thompson continued the discussion until the referee chose to expel him from the court. Until this episode, the home team’s lead was only six points. At the end of the game, the difference was 29 points.

The Warriors star’s reaction in the third quarter is certainly a result of his on-court performance. After all, in 18 minutes he scored just two points, the only successful shot of the eight attempts. When the Suns’ star player in 2022/23 was responsible for tagging Klay Thompson, the Warriors star didn’t make any shots from the court. The difficulty in overcoming Booker then irritated the pitcher.

But Phoenix’s triumph was not just because of the expulsion of the opposing player. The team led by Monty Williams was dominant throughout the match. As a result, he took the game into halftime ahead and knew how to make the California team taste its own poison. The Warriors’ “death room” was then dominated by the Suns, expanding the gap to 18 points.

In addition to Booker, the hosts had other great individual performances. Thus, five players ended the match with more than 15 points. Among them, the reserve Jock Landale who added 17 points and seven rebounds. Chris Paul managed to score more in relation to the other games and had 16 points, being four balls from the perimeter and distributed nine assists.

More down in the last period, therefore, the Warriors were unable to return to the game. On the other hand, Steve Kerr’s team had some good moments, especially with individual appearances by Stephen Curry and Jordan Poole, who were the highlights of the team at the Footprint Center.

Curry ended the night with 21 points and four threes. Poole, on the other hand, was very participative, above all, in the second quarter, which was the only period won by the visiting team. Golden State, will face the Miami Heat on Thursday at home.

Finally, the Suns won the duel of two of the teams that are known for their strong collective play and knew how to exploit the deficiencies of the main rival in the Western Conference. Now, the Arizona team faces the New Orleans Pelicans on Friday.

Tuesday’s round also featured three other clashes. Even with Zion Williamson and Brandon Ingram injured, the New Orleans Pelicans beat the Dallas Mavericks in a duel disputed until the last seconds. For this, the young Trey Murphy surprised, called the responsibility and was the main scorer of his team. Besides him, CJ McCollum managed to articulate the plays well and ended the match with 11 assists.

On the other hand, the Mavericks limited themselves to just three good individual performances and sinned collectively. Luka Doncic, therefore, was the highlight once again. Likewise, Spencer Dinwiddie had a good turnout and Christian Wood, for the first time of the season, finished a match on court. It is worth remembering that JaVale McGee has been the starter. However, the other players of the Texan team did not have major appearances.

The Los Angeles Clippers stumbled once again as they lost to the Oklahoma City Thuder. The Angelino team did not count on Paul George and Kawhi Leonard, spared. Thus, he was no match for this Tuesday’s opponent. The Thunder then took advantage of the fragility of the opponent to win the first victory in 2022/23 with a show from Shai Gilgeous-Alexander.

Finally, the Washington Wizards extended their winning streak by taking third in four games played. In tonight’s showdown, they beat the Detroit Pistons. The big name of the match was Kyle Kuzma who, alongside Kristaps Porziņģis, led the team from the American capital. The Pistons, on the other hand, continue with a negative campaign, but saw the main reinforcement of the season, Bojan Bogdanovic, have a great performance.

So, follow Jumper Brasil on your social networks and discuss with us the best that happens in the NBA