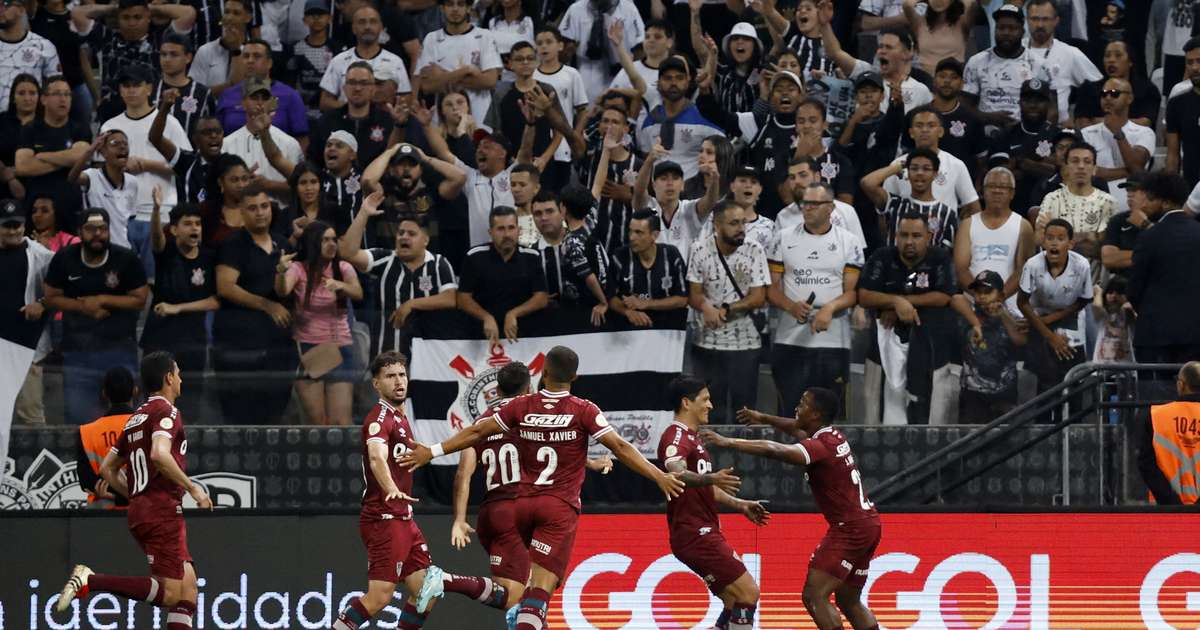 With two from Cano, Fluminense wins and overtakes Corinthians in the Brasileirão

With losses still in the first half, the Corinthians couldn’t hold the Fluminense and lost 2-0, with two goals from Germán Cano, at Neo Química Arena, in a game valid for the 34th round of the Brazilian championship.

With 58 points, Tricolor das Laranjeiras took the fourth position, followed by Timão, who remained with 57. The result was not worse for the Corinthians fan because Internacional beat Ceará, in a comeback, and did not allow Palmeiras to become champions tonight.

Timão returns to the field this Saturday, at 19:30 (Brasília time), in a late game of the 32nd round, against Goiás, in Serrinha. Flu will visit Ceará on Monday, at 8 pm (Brasília time), at Arena Castelão, for the 35th round.

Cano makes the L in Itaquera

With less than a minute into the match, Gustavo Silva received the ball on the right and, in a dispute with Calegari, apparently twisted his knee and had to be replaced by Ramiro.

In its first attack, at 11 minutes, Flu started on the right with Arias and, after the ball went out and a corner kick, the ball fell to Cano, who did not forgive and scored his 19th goal in the Brasileirão.

At 18, Timão arrived twice without danger, in long-distance shots by Renato and Fausto. At 21, Yago Felipe responded in the same way, in the middle of the goal.

Alvinegro had two consecutive chances to score, first with a kick by Renato, deflected midway by Nino, and, after a corner kick, Balbuena almost headed it.

In the 33rd minute, Renato Augusto asked for a substitution after feeling pain and Giuliano came on in his place. More connected in the game, Flu went up, putting pressure in the area with Yago and Cano. Afterwards, Arias kicked aimlessly out.

In the last move of the first half, in a corner taken by Giuliano, Gil headed, forcing Fábio to make a great save. In the sequence, Balbuena sent it with a head with danger.

On the return of the break, Balbuena was replaced by Bruno Méndez. At six minutes, Cano kicked from cover and tried to surprise Cássio, who was ahead, but the ball went wide.

After a slight pressure from the hosts, Flu returned to attack, in a cross kick by Matheus Martins, but Cássio defended. In the sequence, shirt 12 and Cano got involved in a confusion, culminating in yellow for both.

At 20, the ball was raised to Matheus Martins, who sent it under the goalkeeper’s legs, but the offside was marked. Shortly after, Manoel headed out.

However, another chance was not wasted. At 25, Calegari reached the bottom, crossed in measure and Cano, from the side, hit first and scored the second, reaching 20 goals in the tournament.

Leaving for the 40th minute, Mateus Vital was launched to the attack by the side and crossed for Giovane, who deflected for the goal, in a spectacular defense of Fábio, in the best chance of the Corinthians.

Yago still had a chance to widen for Flu, in a long-distance shot, out.