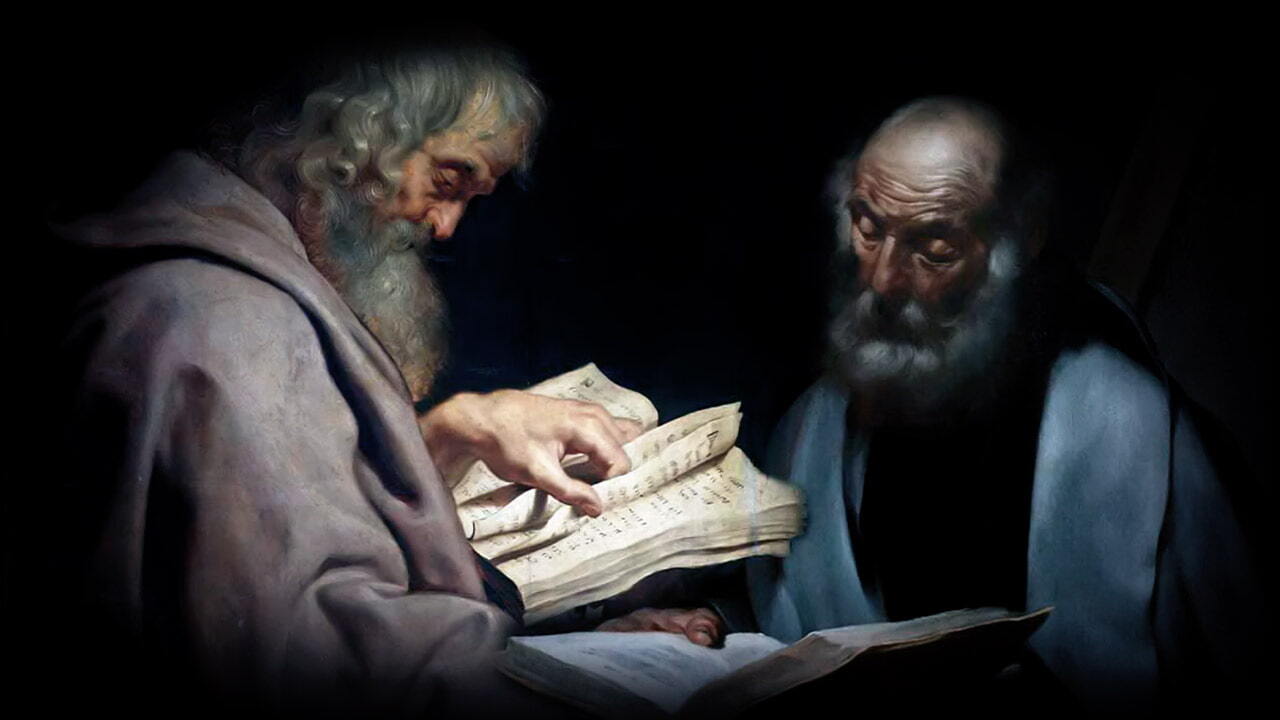 Family of Christ by Blood and Grace

Gospel of Our Lord Jesus Christ according to Saint Luke
(lc 6.12-19)

In those days, Jesus went to the mountain to pray. And he spent the whole night in prayer to God. At dawn he called his disciples and chose twelve from among them, whom he named apostles: Simon, on whom he named Peter, and his brother Andrew; James and John; Philip and Bartholomew; Matthew and Thomas; James the son of Alphaeus, and Simon, called Zealot; Judas, the son of James, and Judas Iscariot, the one who became a traitor.

Jesus came down from the mountain with them and stopped on a level place. There were many of his disciples and a great multitude of people from all over Judea and from Jerusalem, from the coast of Tire and Sidon. They came to hear Jesus and be healed of their diseases. And those who were tormented by evil spirits were also healed. The whole crowd tried to touch Jesus, because a power went out of him, and he healed them all.

Today we celebrate the feast of the Apostles Simon and Judas. Who are they? First thing, very clearly: everyone knows that they are two of the twelve Apostles, that is, of those twelve men that Jesus chose to renew the people of God, which already existed in the Old Testament, formed by the twelve sons of Jacob. Now, Jesus chooses another twelve, because he wants to make a new beginning, making all things new. It is the New and eternal Testament.

Some of the twelve were blood-related to Jesus, others were not. Yes, the bond with Jesus that is being inaugurated is the bond of faith, but it turns out that, probably, Saint Simon and Saint Jude were in fact a certain kinship with Our Lord. Because? Because not only Tradition as evidence in the Holy Scriptures lead us to believe that the two were brothers, not only brothers to each other, but also to James the Less, another Apostle, bishop of Jerusalem, the “son of Alphaeus”.

This “of James” is even found in the canonical letter in which Judas thus identifies himself. After all, his brother James, Bishop of Jerusalem, was much better known at that time; therefore, he identified himself as “Judas of James” or, as the evangelist St. Matthew writes, “Judas Thaddeus”. These three Apostles, James, Simon and Judas, were probably cousins ​​of Our Lord Jesus Christ, because they were sons of Mary of Cleopas; therefore, here we have three brothers, relatives of Our Lord, who were chosen to be Apostles.

This also sheds light on us because the Gospels insist, and rightly insist, that in Nazareth Jesus did not perform many miracles “because they did not have faith”, which does not mean that no one in Nazareth had faith, nor that none of the family of Jesus had faith. Here are two that had it!

So, it is beautiful and important to see how the Church, founded on twelve Apostles, is now the new Israel, whose bond is no longer the blood of Abraham, but the Blood of Christ shed on the Cross. Of course, this Israel is open to pagan peoples, so we also enter, also founded on this seed, on this new descendant of Abraham.

So, we praise God for having this faith, the faith of the twelve Apostles, faith founded on these men who shed their blood so that the Church, the new Israel, would have the unshakable pillars that are celebrated by God in Heaven. It is what we see in the Apocalypse when the new Jerusalem, the Bride, descends from Heaven and finds its foundation in the twelve Apostles of Jesus.

We want to ask for the intercession of these saints, Saint Simon, less known, and Saint Judas Tadeu, more popular because of the various apparitions of Our Lord, especially the most famous, Saint Bridget, to whom he promised that those who resort to the intercession of Saint Jude Thaddeus will see great miracles and great graces – hence he became known also as the saint “of impossible causes”. Above all, let us ask him for this cause that seems so impossible to us: that of being holy and persevering and, like the two of them, courageously shedding our blood to defend the faith of the Church.

election of apostles (cf. Mc 3.13ff). — V. 12s. in those daysJesus withdrew to the mountain (εἰς τὸ ὄρος, probably the mount of beatitudes) to pray and spent all night in God’s prayer (gr. ἐν τῇ προσευχῇ τοῦ θεοῦ, lt. in prayer I gave), ie, in prayer to God, on account of the importance of what he would do next (cf. Mc 1.35). — When day came, he calledie, gathered his disciples, i.e., those who followed him as a Master; and chose twelve from among them, whom he named Apostles (from the verb ἀποστέλλειν = to send, lt. mittere), in order to express their office, elected and sent as legacies of God and of Christ, to bear witness to the doctrine and (later) to the resurrection of Our Lord (cf. at 1.21s). Mark (3:13) says that Jesus called to himself those he (emphatically: gr. αὐτός, lt. ipse) wantedand marks the immediate double end of this election: 1st for them to walk almost continually with him, and thus imbued themselves more deeply with his doctrine, 2. and to send them to preach as helpers of your ministry [1].

6. bartholomew (= son of Tolma or Tolemy) is probably the same person who Nathanael (of which you speak Jo 1.45-50; 21.2). The identity between them is ignored by the oldest tradition, but it came to be admitted by many Latins from Rupert of Deutz († 1129) and by several exegetes of the 16th century. XVI; in fact, the evangelist John, who does not speak of any Bartholomew, twice enumerates Nathanael among the Apostles (cf. location cit.). The Synoptics, although they make no mention of Nathanael, nevertheless speak of Bartholomew. It is also noteworthy that in the Synoptics Philip and Bartholomew and in the Gospel of John Philip and Nathanael appear side by side or in the same narration. It is, therefore, at least plausible that this Apostle, like Peter, Matthew, etc., had a double name, so that he was known as Nathanael (proper name) and as Bartholomew (cognomen, or father’s name).

8. Mateuspublican, who was also called Levi. Matthæus (Gr. Μαθθαῖος or Ματθαῖος) is probably transcription of the Heb. Mattaiwhich means gift or gift from God (= donate to God), similar to Theodorus, Adeodatus (see “Mathaniah” in 1 Cr 9, 15). Some authors, from a minority position, derive the name from the Hebrew term emeth (= faith), in the form Amittai (= Faithful, cf. Jn 1.1, vul. amathi), and Aleph was lost under the influence of aram.

9. Tiagoson of Alphaeus (halfhaiknown by another name, or perhaps by a different pronunciation of the same name: cleophas [2]). It is quite probable that this Apostle and James τὸν μικρόν (the Less) are the same person, i.e., the author of the Catholic Epistle, told by St. Paul (cf. GL 2,9) between the columns of the Church and known in the early Church as “brother of the Lord”.

10. Thaddeus (maybe from taddajja’ = breast; for some, the same as Θευδᾶς) in many codices and ancient monuments is called labbeu (from the word lebb = heart, or of Lebba, village of Galilee); is called by another name in lc 6.6 and at 1.18: Jude of Jamesthat is, brother of James, as he himself states at the beginning of his Epistle: Judas, servant of Jesus Christ, brother of James etc.

11. Simon Canaanitein Lc. zealotsie, faithful follower of ancient traditions, ζηλωτές (cf. GL 1:14), which is translated by the word aram. Qan’ana’; others derive Canaanite from Cana of Galilee (which would give, however, καανῖος). From Mt 13,55 some authors conclude that Simon Canaanite would be brother of James and of Judas.

12. Judas Iscariot (Heb. ‘ish Qerijjoth = man of Cherioth, a certain city of the tribe of Judah, cf. js 15.25). The traitor (προδότης) was the only Jew (ie, from the region of Judea) among the Apostles; all the others were Galileans, for to them the angels address themselves: men of Galilee (at 1:11), and some men who were in Jerusalem: Are they not Galileans? etc. (at 2.7). It was in Galilee that Jesus found the most faith, and the traitor came from the region that most opposed Him. The election of Judas to the apostleship demonstrates that men are saved or condemned, not by necessity of nature (φύσει), but according to the measure in which each one proves himself worthy of salvation or damnation. [3].

NB — It should be noted that: The) each evangelist catalogs the Apostles according to his own criteria (eg, citing them two by two, like Mt.; or individually, like Mc; or, like Lk., first listing the brothers and then enumerating the others one by one through the καί particle). The distribution of Mt., appearing before the first mission, probably corresponds to the order in which they were sent; — B) in all lists (including that of at 1, 13), the 12 are divided into three series of four names, each of which always presides, in the four catalogs, the same Apostle (1. Peter, 2. Philip, 3. James), while the others, within of any series, appear in varying orders. It is evident that this distribution is not causal.

Previous Intel fixes slow memory issues on Arc A770 16 GB GPUs
Next Taylor Swift reveals that she auditioned to participate in the movie “Les Miserables”: “A Nightmare”