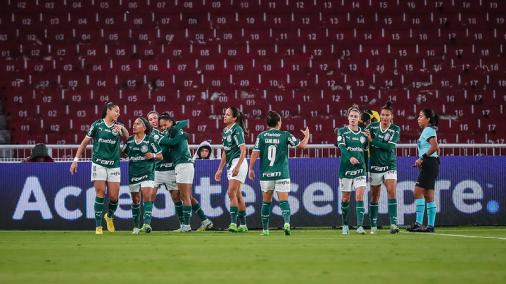 In unprecedented participation, Palmeiras reaches the long-awaited final of the Women’s Libertadores

O palm trees beat América de Cali-COL 1-0 in a well-played game in Quito, Ecuador. With the result guaranteed through a header by Ary Borges, the Palestrinas reached the final of the Women’s Liberators in the club’s first participation in the tournament.

> Brazilians in the sights of European teams: remember Brazilian players who became naturalized

“QUITORMENTA” TO SCORE A GOAL…

In a new match in Quito-EQU, Palmeiras followed with a recurring problem: the waste of clear chances. Ricardo Belli’s team had a great first half of ball possession, pressure and passing, but none of that was converted into goals. Ary Borges and Bia Zaneratto even tried, but the ball followed the opposite direction of the posts. The opportunity missed by shirt 10 was the one that was most missed in the opening 45 minutes, as the opposing goalkeeper was far from the goal. Game break without much news and 0 to 0 remaining on the scoreboard.

> Simulate the result of the Women’s Libertadores decision!

THE FINAL IS SOON “ARY”!
​
The second half started with more Palestinian pressure against Cali. The rhythm of the game remained controlled and the goal seemed to be getting more and more mature. No sooner said than done. After nine minutes, Byanca Brasil advanced along the side and found a cross almost “with his hands”, it was so perfect. Ary Borges, who knows how to position himself and take advantage of the fragility of the opposing defense, appeared alone and headed towards the back of the net, leaving the final closer and closer.

The final stretch of the match got a little more nervous. Palmeiras wanted to hold on to the result, while América de Cali-COL did everything to get the tie. With that in mind, Ricardo Belli’s men needed to have a cool head and a warm heart to reach the spot in the decision. In one of the most complicated moments, Bruna Calderan released her arm in the face of the opposing player, but as VAR will only be implemented in the last game, nothing was scored and the result was not compromised.

At the final whistle, the Cali players lost control and almost got into trouble with the Palmeiras. The complaint did not end there and the arbitration had to calm the mood and disperse the turmoil caused by those who had no reason to “get” one of these. Calm came to Palmeiras and the final too. 1-0 on the scoreboard and guaranteed classification towards the unprecedented title.

NEXT AND LAST APPOINTMENT

Now, Palmeiras faces Boca Juniors-ARG, in search of the dreamed title of the Women’s Libertadores. The match will take place on Friday at 19:00 (Brasília time).

Previous “The White Lotus”: From Hawaii to Sicily, Award-Winning Series Continues to Satirize Privilege and Toxic Masculinity
Next Find out about your career and upcoming projects