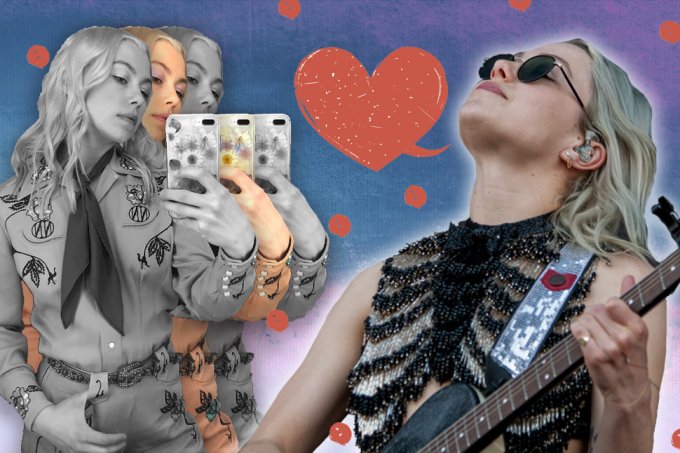 Phoebe Bridgers is the cover of the October issue of Teen Vogue! The 28-year-old singer, who has her own label, Saddest Factory Records, is doing great on tour for her Grammy-nominated album, punisher, was super engaged in social discussions. The North American opened up about several relevant issues, such as legal abortion, sexism in the entertainment industry and the Johnny Depp affair, and vented about making peace with feeling angrywhich, for her, is healthy.

For those who don’t know, Phoebe proved to be a strong activist in the cause involving abortion, including protesting the US Supreme Court after amending the law “Roe v. Wade”, which guaranteed the constitutionality of the procedure. At the time, she snapped: “Fuck that shit, fuck America. Like all these irrelevant motherfuckers trying to tell us what to do with our bodies.”

It was also the first time that the artist spoke publicly about the subject. and shared with the internet that she had had an abortion. She said that she was very anxious, because she always hated going to the doctor, but in the end everything went well. “Me too I hate having people close to any sensitive part of my body, so I was already nervous. In the end, though, it was super easy.”told the Teen Vogue.

Your position on abortion

By sharing his account, Bridgers intended to break all the stigma surrounding the agenda, and to emphasize howHow the issue of safe abortion is elitist and a public health case.

“I Think middle and upper class white people will always have access to health care and safe abortion. be flying [para outro estado] or accessing fucking organizations,” he said. She even ended her speech by demonstrating affection for organizations that facilitate the procedure for people who have difficult access – or even non-existent.

The singer stated: “Don’t let anyone piss you off about abortion, because unless you’re doing it in an unsafe way, there are resources for you if you’re trying to get one – and you should get it, whatever the reason.”

The artist conquered the spotlight once and for all and consolidated herself as an icon with the arrival of the movement #MeTooin the fall of 2017, when releasing a song about her relationship with a guy much older than her.

During the conversation about the movement to combat violence against women in the film industry, the case of Johnny Depp and Amber Heard became the agendabecause at the time it was being televised, Phoebe came out in defense of the actress: “If Amber Heard exhibited any neurotic behavior, it was used against her. So Johnny Depp Admitted Some Of The Most Violent And Crazy Things on court And somehow people weren’t surprised?!” he asked.

For her, The entire repercussion of the case was revolting: “He washi treated like a fan war. Laughing at someone crying in court? It was disgusting,” he said.

Phoebe Bridgers is not afraid to speak up and use social media, and her media spotlight, to fight for what she thinks is right. Precisely for this reason, today the artist is the darling of Gen Z and the LGBTQIA+ communityfor using his voice to speak and sing causes so relevant to the world.

And as sickening as things may seem, Bridgers believes that sometimes violence is an answer. Not the one that is cruel in essence, but the one that promotes change in the face of unsustainable scenarios. “I feel that hate is really healthy. It’s okay to be really angry.”encouraged the American.

Give it to him, Phoebe!