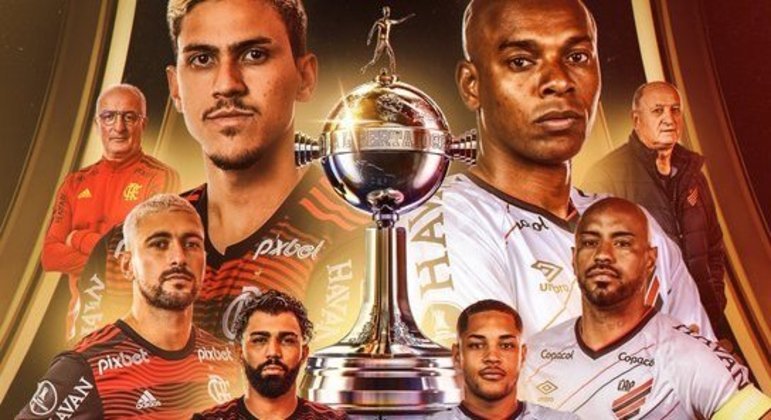 ‘Value’ five times more than Athletico, Flamengo is prepared for the war for the Libertadores tri – Prisma

Flamengo is the absolute favorite against Athletico Paranaense.

The decision of Libertadores, tomorrow, at 17:00, in Guayaquil, shows the confrontation theoretically unbalanced.

Basically by the potential of its players, reflected in the market price.

A simple survey shows the difference in economic potential between clubs.

With the money that Flamengo spent to have only Gabigol, R$ 95 million, it would be possible to assemble 90% of Felipão’s team.

The colleague Rafael Reis and some sites in Paraná had already shown this incredible difference.

With Flamengo worth five times more than Athletico.

The journalists who made this calculation used transfermarkt, a website specialized in football negotiations, as a reference.

But another fundamental data needs to be taken into account.

Flamengo has four players who played in the World Cup.

Varela is injured and misses the team.

Athletico has only Fernandinho.

This experience, for Dorival Júnior, is what really counts.

Three of them will start: David Luiz, Filipe Luís and Arrascaeta.

And they are, as always, very participative in preparing the team for tomorrow’s decision. They have insisted on the contempt for favoritism pointed out by the press. And keep the focus on Athletico’s collective strength, on the intensity and speed of Felipão’s team.

Dorival Júnior has followed the same path, of concentration, of preparation for a physical battle. The need for the team to act in a compact, vibrant way.

The conquest of the third championship and the chance to compete in the Club World Cup are situations considered almost mandatory for Rodolfo Landim’s board. The president remains firm in Flamengo’s internationalization plans and in the dream of building the largest stadium in Latin America, in Rio de Janeiro, fleeing Maracanã.

Mario Celso Petraglia, the man who dominates Athletico, is also ambitious. He didn’t make the club’s name “world”, without an accent and adding oh, by the way.

The plans are big. Winning Libertadores would mean breaking the geographic dominance of football in São Paulo, Rio de Janeiro, Rio Grande do Sul and Minas Gerais. Making Paraná state champion of the biggest competition in South America would be very relevant. And the appreciation of the club that took Coritiba’s place on the national scene.

The decision also has an absolutely unexpected side.

At the beginning of 2022, no one would bet that Dorival Júnior and Felipão would be deciding Libertadores.

Dorival was recovering from prostate cancer, looking for teams. Until Ceará hired him, in March. He went to Flamengo in June.

Felipão had been fired in October 2021 from Grêmio. And he was studying retirement as a coach and working as a football coordinator. When Petraglia convinced him to be a “temporary technician” in Fábio Carille’s place. When they found a professional they trusted, Felipão would take over as coordinator.

But the team was “too right” with Felipão, so much so that it’s in the Libertadores final.

There will be another interesting duel tomorrow. Gabigol and Vitor Roque. The Flamengo striker lives his last moments of dreaming of playing in the Qatar World Cup. He has not been called up by Tite since January. He lost his space to Peter.

Vítor Roque is the player that most hurt Ronaldo’s soul to see him leave Cruzeiro. The 17-year-old has enormous potential. Start, dribble and coolness to score. Athletico paid the very low termination fine of R$ 24 million and took the boy. Felipão is rehearsing to start the game with the experienced Pablo, but Vítor Roque will enter the match. With a mission to change the rhythm of the Athletic attack.

At the age of 37, Fernandinho left Manchester City, where he made history, in full form. And he took the lead at Athletico impressively. He brought personality, confidence and intensity that the team had been lacking for years.

He will be a key player in trying to stop the cerebral Flamengo midfield. Mainly watching over the most talented midfielder who works in Brazilian football: Arrascaeta. The player has grown too much in the hands of Dorival Júnior, who lets him occupy the sector he likes the most, where he performs the most: in the midfielders, with freedom to focus on the offensive, taking the ball more relaxed, for starters, kicks, disconcerting dribbles.

Not by chance, yesterday, in Ecuador, both teams practiced too much set pieces. Felipão and Dorival believe that both Flamengo and Athletico have serious problems with crosses.

And they bet that a corner or lateral free kick can decide the final.

But it will be the psychological side that will weigh in this decision.

Dorival tries to convince his athletes not to get carried away by favoritism.

And Felipão resorts to the old trick of “let’s prove everyone wrong and take down the ‘favorite”’.

In addition, two administrative philosophies will be face to face.

Petraglia’s ‘iron fist’, against the eternal confrontation between the various Flemish wings for power.

Being champion is worth 16 million dollars, R$ 85 million.

And the privilege of playing in the Club World Cup.

In theory, there is no denying the red-black favorism.

But there is no way to despise Athletico de Felipão.

Brazil will be very well represented in this Libertadores final…


Kylian Mbappé leads the ranking with the biggest contracts in the history of the sport; check the names

Previous Anthony Mackie Says Sebastian Stan “Won’t Get Rid of Him”
Next Cryptos Today: Bitcoin and Ethereum Pull Back on Nasdaq, But Still Set to Close Second Straight Week Higher