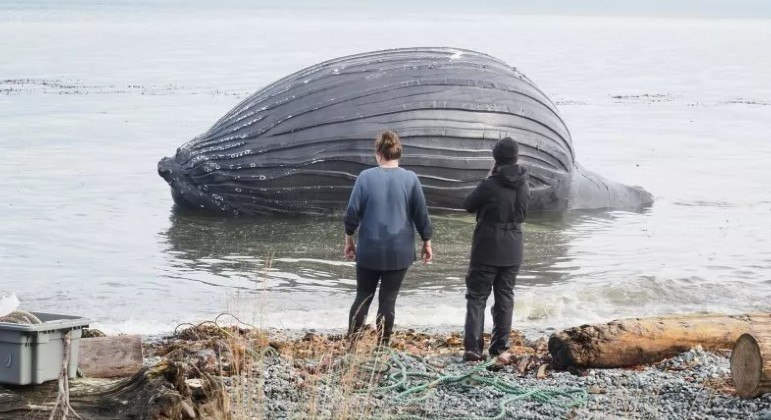 The corpse of a humpback whale washed up on a beach on Malcom Island, in the Canadian province of British Columbia. Despite not having any injuries, Spike’s carcass, as she was known, is completely inflated by gases from the decomposition process.

In an interview with Newsweek, Jackie Hildering, a species researcher and director of communications for the Society for Marine Education and Research (MERS), called the swelling “completely normal.” “Eventually this gas will find a way out and the body will empty itself,” she added.

In some cases, the inflation process can cause the animal’s skin to break. In 2004, for example, the corpse of a 60-ton sperm whale exploded like a balloon as it was transported down a busy street in Tainan, Taiwan. Buildings and passersby ended up covered by the bloodied innards of the animal.

Fortunately, according to Jackie, Spike is apparently not in danger of bursting anytime soon: “Last night, this whale’s distended belly and throat had already shrunk compared to previous photos.”

As the gas is expelled, the carcass can be dragged back into the ocean. However, while there is time, the researcher and team have arrested Spike for a necropsy to be performed and reveal the cause of the creature’s death.

“Dead whales often sink and therefore the stories of their deaths are generally not known,” she explained.


The next woman ended up in the hospital after being “run over” by a whale. Check out!

Previous iPhone 14 Plus goes on sale in Brazil; check the prices
Next ‘Lie Influencer’ discusses the consequences of being noticed on the internet