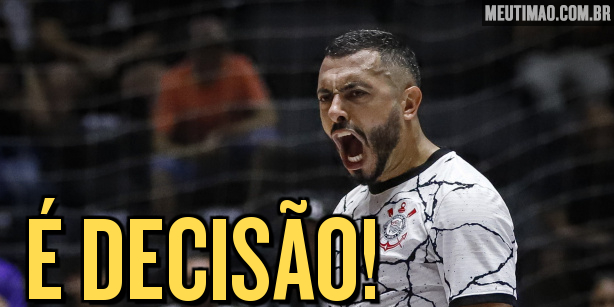 Corinthians drew 1-1 with Jaraguá on Friday night, for the return game of the semifinals of the National Futsal League (LNF). With the result, Timão is classified for the final of the competition.

With the classification, the Parque São Jorge club reaches its third LNF final. On Monday, Cascavel and Atlântico face each other to define Timão’s opponent in the decision.

Deividy Hadson counted on the return of Lucas Oliveira and Tatinho, who did not play at Parque São Jorge due to suspension. Thus, Timão entered the court with Lucas Oliveira, Allan, Henrique, Tatinho and Deives.

The game started tight, with both teams looking for spaces. Jaraguá tried to suffocate Corinthians, who ended up finding it difficult to play. At four minutes, when he managed to advance with danger, Deives missed his chance under the post.

Then, it was the home team’s turn to arrive in danger. William got the shot that went close to the goal defended by Lucas Oliveira. At seven minutes, Levy lost the ball in defense and Jaraguá again missed a good chance.

With the advantage of a tie in normal time, Timão decided to bet on quick transitions to surprise the opponent. In one of them, at eight minutes, Canabarro almost made it 1 to 0. Subsequently, the hosts triggered the challenge for the referee to check a possible penalty, which did not happen.

With the reserve players coming in, Lucas Martins made a beautiful move, resulting in a good chance for Corinthians. On the counterattack, the same Lucas Martins interrupted the descent of Jaraguá and was yellowed.

In search of the result, the home team pressed, but in rapid transition. Henrique found Tatinho free and the winger opened the scoring for Timão in the 11th minute of the game. With that, the team from Santa Catarina needed the turnaround to qualify.

In the rest of the first stage, the game was truncated and none of the teams could arrive in danger. In a counterattack led by Canabarro, Jonas, from Jaraguá, was cautioned with a yellow card.

As in the beginning, the teams were looking for space, but without success. With the game coming to an end, Lucas Oliveira made a good save with a long shot from the opponent. In sequence, Eka tied the duel with just 20 seconds left. With that, the partial score was 1-1.

With the partial result, the Parque São Jorge club started the second half with one foot in the final. Therefore, in the first seconds, Jaraguá arrived in danger and Lucas Oliveira made a good intervention.

The home team pressured in search of a comeback and Corinthians continued to bet on the speed of their players to once again stop the opponent.

With six minutes played in the second half, the teams could not attack and the game was lukewarm. After the minutes passed without great emotions, Jaraguá started to press. Neto almost scored the second for Santa Catarina. On the home team’s descent, Deives committed a foul and was yellowed.

With 10 minutes left, goalkeeper Tiago, from Jaraguá, started to act in advance as a line goalkeeper. After a corner kick, Leco almost hit a beautiful kick. Shortly after, a little confusion happened outside the court. When there were eight minutes left in the game, one minute was added, which caused the Corinthians bank to revolt.

With the pressure from the home team, Lucas Oliveira started to shine. The alvinegro goalkeeper made a good sequence of defenses, holding the result favorable to Corinthians.

The people from Santa Catarina were suffocating and Timão was holding on as best he could. With two minutes remaining, Jaraguá took Tiago away and started to bet on a line goalkeeper. At that time, the black-and-white players didn’t pull counterattacks anymore.

Even with the opposing pressure, Corinthians managed to hold on and secured the classification for the final of the National Futsal League.