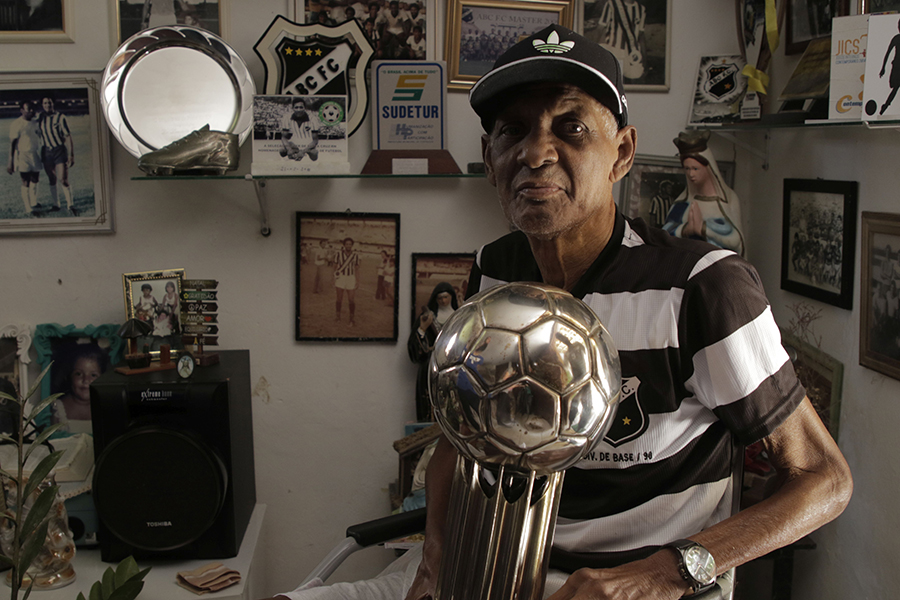 Potiguar football today lost one of its great references within the sport in Brazil. Alberi Ferreira de Souza, 77, died at Hospital da Hapvida due to complications from diabetes. He was honored by the club that immortalized his art paraded on the potiguar lawns and also in other parts of the country, giving the name of the idol to the ABC’s Professional Football Training Center.

In addition to Alvinegro, where he marked his career, Alberi, whose name became synonymous with the ABC number ten shirt, also had spells in other clubs, including Santa Cruz and América-RN.

Alberi was the only player to receive the Bola de Prata from Revista Placar, playing for a team from Rio Grande do Norte, this happened in 1972. Marinho Chagas (Botafogo-RJ side), Piazza (Cruzeiro midfielder), Ademir da Guia (Palmeiras midfielder) and Paulo Cézar Caju (Flamengo striker) received the same award.

During his career, the player of extreme skill and elegance on the field, Alberi scored 79 goals with the shirt of ABC-RN, and in his beautiful career he counts six state titles, four for ABC, one for América-RN and another for Campinense-PB.

It is very difficult to dissociate Alberi’s image from that of ABC, where he managed to consecrate himself after arriving from Santa Cruz-PE. Alberi made his debut on April 10, 1968, in a match played at the Juvenal Lamartine stadium against Ferroviário-RN valid for the Campeonato Potiguar. When ABC won 3-2 and Alberi scored twice, leaving quite a business card.

It was defending the colors of Alvinegro Potiguar that he lived his peak in his career, where he won the fourth potiguar championship in 1970, 1971, 1972 and 1973. In 1972 he was awarded the highest award given to players at the time, which was the Silver Ball from Placar Magazine. , composing the selection of the biggest highlights of the Brasileirão alongside Leão (PAL), Aranha (REM), Figueroa (INT), Beto Bacamarte (GRE), Marinho Chagas (BOT), Piazza (CRU), Ademir da Guia (PAL) , Zé Roberto (CFC), Osni (VIT), Alberi (ABC) and Paulo César Caju (FLA). After that, he refused several proposals to change clubs, one of them being from Fluminense.

In 1974 he left ABC to defend Rio Negro, where he played for two seasons outside RN, returning to potiguar lands only in 1976, but this time to defend ABC’s biggest rival, América/RN, which in addition to taking the the opponent’s greatest ace, he also won the state title.

The relationship with América continued until 1978, when with his career coming to an end, he played in 28 matches and scored only six goals. So it was their turn to bid farewell to the other giant from Natal and start a gypsy career working at Baraúnas, in the second half of the year 78, Campinense-PB (1979), Alecrim from the second half of 79 until the year of 1981, when had time to work for Icasa-CE.

After that, he returned to his old home, to take care of receiving the affection of the fans of the club, of which he had immortalized himself as an idol and left the lawns in 1984, after having scored 79 goals for the people’s team and won 4 state goals.

He stopped acting at the age of 38, but he was still missed. It was difficult to see ABC on the pitch and not have that number ten maestro on the pitch playing and organizing the team with his unique elegance.

He stopped at the age of 38, saying the following sentence that became famous within Potiguar football: “When people start to look at you with suspicion because of your age, it’s better to leave the ball aside. That’s exactly what I did,” Alberi said in his farewell.

In his professional career Alberi scored 283 goals. In 2001, in an election carried out by Jornal Tribuna do Norte to choose the all-time selection of ABC and in a similar survey carried out by ABC due to the celebrations of the club’s ninety years, Alberi appeared as a starter in both selections. Alberi is survived by his wife, nine children and eleven grandchildren.

Previous Britney Spears breaks silence on controversy with Selena Gomez
Next Who calls themselves ‘gamer’ increases chances of being extremist, says research