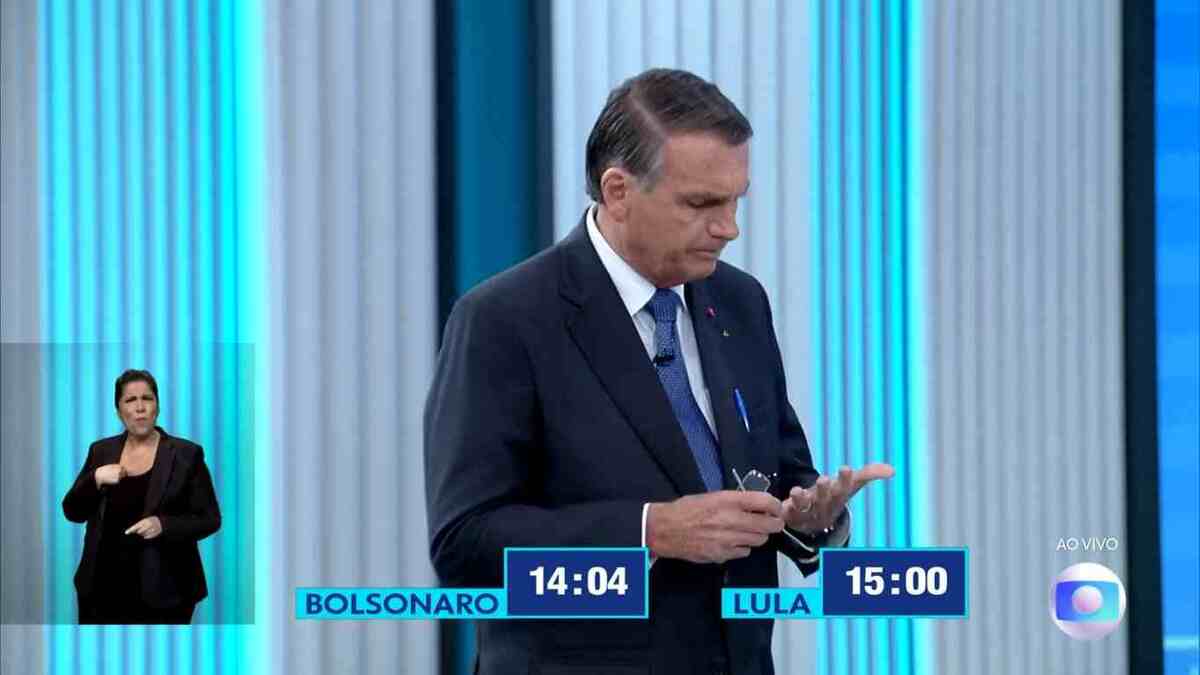 
The words that were in Bolsonaro’s hand were “13th”, “FÉR” and “H Extras” – (Credit: Reproduction/Rede Globo)

On the night of this Friday (28/10), internet users returned to talk about candidate Jair Bolsonaro’s (PL) strategy of using a “glue” in his hand. During the debate on Globo, viewers managed to see some words written in his hand. of the presidential candidate.

The words that were in Bolsonaro’s hand were “13th”, “FÉR” and “H Extras”, referring to the thirteenth salary, vacation and overtime. In addition to these, it is possible to read on the hand of the candidate for reelection the acronym “IPI”, probably signaling the Tax on Industrialized Products, the other scrawled term was not legible in the images in which the presidential candidate’s hand appears.

Glue in the first round of elections

It is not the first time that Bolsonaro has written in his hands points that he intends to discuss in debates and interviews. on the Sabbath of National Journalon August 22, at the beginning of the electoral campaign of the first round, the Chief Executive took a “glue” with the themes “Nicaragua”, “Argentina”, “Colombia” and “Dário Messer”.

However, if the goal was to get any of the four themes written down in hand, Bolsonaro was not successful. The interview with William Bonner and Renata Vasconcellos addressed topics such as democracy, pandemic, environment and economy.

Translating what was written because it was kind of illegible pic.twitter.com/RPoojwZNcE

Glue in Bolsonaro’s hand: “Nicaragua, Argentina and Colombia”, all in socialist disgrace. And, finally, “Dário Messer”, the money changer who delivered dollars to Roberto Marinho. pic.twitter.com/PkD8424Mi7

See the repercussion of this Friday (28)

Bolsonaro had to read the glue in his hand several times to remember three words. Pathetic.

bolsonaro reading the glue in his hand so he doesn’t forget to say anything and even then he keeps saying nothing to nothing pic.twitter.com/0EvWwnMFzW


Bolsonaro reading his hand in the debate ????

Starting at 9:30 pm this Friday (28/10), the two presidential candidates will participate in the last direct confrontation before the second round of elections.

Check out the most important details and coverage of the Courier at this Moments.https://t.co/O6BBwAQrbk

Starting at 9:30 pm this Friday (28/10), the two presidential candidates will participate in the last direct confrontation before the second round of elections.

Check out the most important details and coverage of the Courier at this Moments.https://t.co/O6BBwAQrbk

Previous Exchanges in Brazil will give more than 100 Bitcoins and 2,000,000 USDT for free to users in various actions
Next Drew Barrymore and Adam Sandler Reunite “Like It’s the First Time”