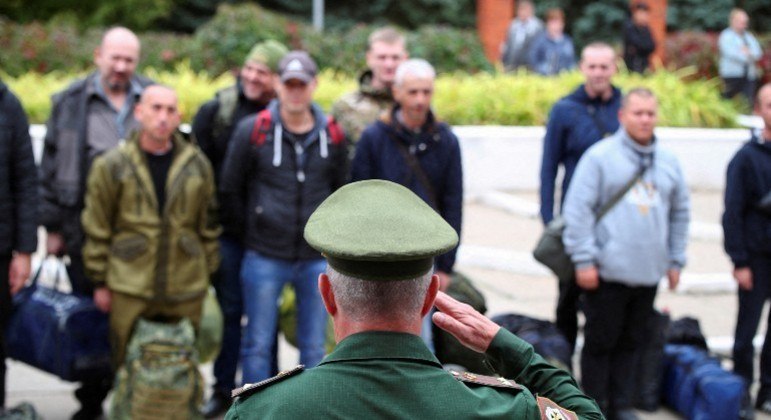 Russia completes deployment of 300,000 troops to fight in Ukraine – News

Russia announced this Friday (28) that it has completed the mobilization of 300,000 reservists and that 41,000 have already been integrated into units in Ukraine, which shows President Vladimir Putin’s willingness to regain the military initiative, after the latest setbacks in your troops.

The announcement comes as the Ukrainian army prepares for a fierce battle to reclaim the occupied town of Kherson, in the south of the country.

In response to the counter-offensive, in recent weeks Russia has bombed energy facilities, which will force Ukraine to establish “unprecedented” electricity rationing to prevent a “complete blackout” in the Kiev province (oblast), a Ukrainian operator announced.

“The task of recruiting 300,000 people has been accomplished,” Russian Defense Minister Sergei Shoigu, alongside Putin, said in a televised address.

Shoigu detailed that 82,000 new recruits were sent to Ukraine and that 41,000 are already integrated into the military units. The other 218,000 are receiving training in Russia.

On September 21, Putin announced a partial deployment to reinforce Russian contingents in the operation launched in Ukraine at the end of February.

The summons sparked an exodus of men and some protests in Russia. Putin praised the deployed soldiers and highlighted the “dedication to duty” and “patriotism” of the Russians.

The authorities installed by Moscow said they had completed the evacuation of civilians from Kherson province.

“The work of organizing the departure of residents […] for safe regions in Russia has ended,” Sergei Aksionov, chief executive of Crimea, a peninsula neighboring Kherson annexed in 2014 by Russia, said on Thursday.

The operation, which Ukraine calls “deportation”, seeks to turn Kherson into a “fortress” in the face of counter-offensive by Kiev troops.

The province, annexed last month by Moscow, had about 1 million inhabitants — 288,000 in the capital — before being occupied by Russian troops in the first weeks of the conflict.

An official from the Russian occupation of Kherson, Vladimir Saldo, said on Wednesday (26) that at least 70,000 residents managed to leave their residence in less than a week.

However, the Ukrainian military command indicated on Friday that “the so-called ‘evacuation’ of the temporarily occupied territory of Kherson continues”.

The President of the Russian Republic of Chechnya, Ramzan Kadyrov, whose forces are fighting in Ukraine, said on Thursday that 23 of his soldiers died earlier this week in a Ukrainian shelling on the outskirts of that city.

In recent weeks, Russia has multiplied bombings against Ukrainian energy infrastructure, forcing much of the country to ration electricity.

These restrictions will intensify to an “unprecedented” level in the coming days in Kiev province to avoid a “complete blackout”, Ukrainian energy operator DTEK said.

This Friday, Ukrainian President Volodmyr Zelensky said that 4 million Ukrainians were affected by the power cuts, decided to mitigate the impact of Russian bombings on the country’s energy infrastructure.

“Many cities and districts in our country adopt cuts to stabilize” the situation, Zelensky said in his daily afternoon report. “About 4 million Ukrainians are currently faced with these restrictions,” he added.

These are the city of “Kiev and region” and the provinces of Zhitomir (central west), Poltava, Cherkasy and Kirovograd (central), Rivne (west), Kharkiv (east), and Chernigov and Sumy ( north), detailed.

Ukraine and its Western allies accuse Russia of using Iranian-made drones in these attacks, something that both Moscow and Tehran deny.

On the battlefield, Ukrainian authorities reported today that Russian bombing damaged two residential buildings and a bakery in Mykolaiv, in the south, leaving one injured.

In the east, in Donetsk province, five people died and nine were injured in the last 24 hours, especially in Bakhmut, which Russian forces are trying to conquer, said Ukrainian regional governor Pavlo Kyrylenko.

Previous NUBANK: Check out the biggest tips to increase your card limit
Next New Thriller Film With Anna Kendrick Gets New Casting | Films